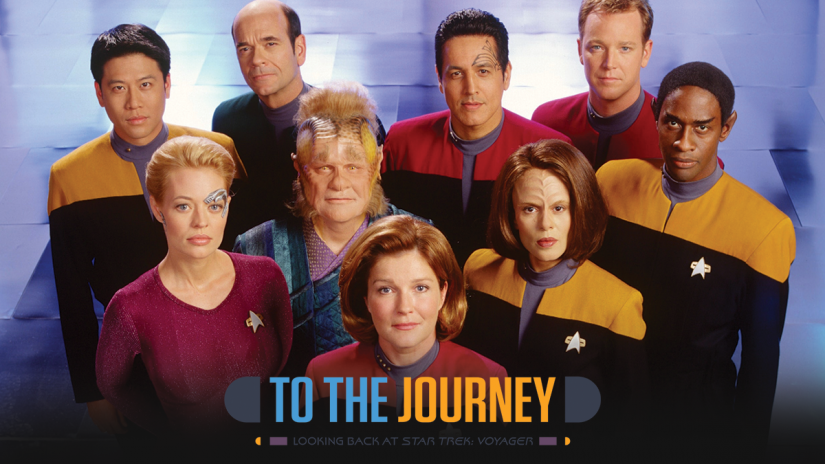 An Archive of a Few Old Trekweb.com Forum Reviews, My Responses and Articles, and Interviews…

It’s been twenty years since Star Trek: Voyager—possibly the most argued and srutinized series in the franchise based on debates at the time on internet forums like Trekweb—went off the air. Hard to believe! The Trek that launched the United Paramount Network, “The First Network for the Next Generation,” is following in the footsteps of its predecessor Deep Space Nine and receiving a retrospective documentary treatment! Fully funded and ready to go, the folks at 455 films are ready to bring us a behind-the-scenes look back at Voyager: its cast and crew, its production and its challenges, and its reception and impact on the world of Star Trek and at large.

These producers have already brought us two wonderful documentaries in the form of For the Love of Spock, and What We Left Behind, so we can rest assured a thoroughly researched and balanced look at the series is on its way!

EDIT (10/28/2022): This documentary is now complete, and has received the title ‘To The Journey’ and you can still pick it up if you like here: The Star Trek Voyager Documentary.

Twenty years ago the Trekweb.com forums used to host forums where users would post reviews and comment threads to the latest episodes and Star Trek news. The Trekweb site went down pretty definitively around 2014, and the forums themselves had degraded and lost significant segments of posts and data long before that. They say the internet never forgets, but I’m old enough to remember times when it actually has!

These forums used to have semi-official Star Trek reviews posted by a user who went by ‘O. Deus’  and had all his reviews posted “Ex Dues” (get it?) by the site owner Steve Krutzler. I often had contrasting views to the official reviewer’s when it came to Star Trek: Voyager, and so as my time on the forums stretched on, I would post these contrasting reviews in reply to the official review. I have compiled a few of his reviews and my “anti-reviews” that I left in the comments, often rushing to be able to secure “first reply.” The scores and quick reviews at the headers in these articles are mine, and my comments (and, occasionally, those of some other Trekweb users at the time) should be clearly marked with a forum-name-and-date header (and a slight background color change for my comments). I have titled these posts:

O. Deus and I didn’t disagree on everything. Right around the time Voyager was finishing up its final season, two new syndicated sci-fi TV shows hit the air, touted as being developed from treatments created by Gene Roddenberry himself. One of these was even started by one of the show-runners and writer/producers of the final seasons of Star Trek: Deep Space Nine: Robert Hewett Wolfe helped develop and launch Gene Roddenberry’s Andromeda.

Andromeda didn’t wind up too good. Like many shows (including recent efforts in Star Trek) its initial show-runner was given the boot while the producers determined the new direction for the show. These reviews are shared here just to ensure folks realize O. Deus and I both saw clear failure when it was evident before us. It’s too bad, really, as the Andromeda premise had so much potential that Star Trek: Discovery would basically make good on it with its third season.

Andromeda – Season 1: “Rose in the Ashes” – O. Deus and the Devil’s Advocate

I suppose I began engaging with the Trekweb opinion circuit primarily by eventually responding to the Reviews Ex Deus because they were so powerful and instrumental in guiding the online conversation about the show. As Voyager neared the end of its run, particularly after the end of Deep Space Nine, the ascendance of the internet and of a vocal fan community also started to bring about the illusion of “consensus” in that the most-repeated negative opinion that comes out about a given creative work becomes the opinion of record. By now it’s a bonafide internet phenomenon. I always had an opinion which stood out against internet consensus… at least when it came to Voyager. I considered my “anti-reviews” both a wedge and a tonic against the unfair sway of the Reviews Ex Deus.

Before that time, however, I simply posted my own opinions on Trekweb regarding both shows as just another user with some thoughts, truthfully first exploring my abilities to crystalize and express said opinions in text. So, since these reviews are all written right after the first-run airing, they are now paradoxically both fresh and ancient, speaking with easy immediate reference about plots that were assumed to be fresh in the readers’ minds:

Having followed and loved and even recorded first-run ever episode of all the Star Trek shows that launched in the heady golden days of the late 1980’s and into the early 2000’s, I was just as much a fan and a regular viewer of Deep Space Nine as I was Voyager. So I had posted some reviews of that show over the years as well.

The internet has grown kinder to Deep Space Nine over the years than it was back in its first-run. At times, the internet consensus at the time seemed at a disadvantage because taking each episode on its own merits does not play to the strengths of the show: its long-term character developments and serialized storylines. I had my qualms with the show and its impact, particularly when it comes to developments like Section 31, but my regard for the show’s accomplishments have only grown over the years as well.

That’s why I was happy to back and thoroughly enjoyed the fantastic documentary project, What We Left Behind, which I wholeheartedly recommend you pick up on blu-ray, but which is also available to watch right now on YouTube, here. :

I also managed to pen a few unique opinion posts for Trekweb back in the day, responding to the various “State of Trek” as it was at the time:

Finally, to round out this retrospective, I have an interview saved which has largely disappeared from the internet, from Michael Piller in 2001:

“You may find that having is not so pleasing a thing as wanting. This is not logical, but it is often true.”

I hope you enjoyed this retrospective, whether you are a similar oldster who once called Trekweb.com your 640px by 480px internet Trek stomping grounds, or some young kid checking this all out on your mobile device for some reason you can’t quite fathom.

I’m sorry I only saved mostly my own words for you. Maybe someday it will be proven true that the internet indeed never forgets, as the Trekweb forums and all their posts must still exist somewhere as a database in some form. Other features from the site, like the Ron D. Moore Q&A Archive that started on AOL Message Boards, have only survived there only in the form of a directory listing, seemingly to continue to drive SEO to the hollow shell site owned by the domain squatters sitting on it. Fortunately you can also find an archive of them all on Memory Alpha, here. Sadly, most of the Reviews Ex Deus seem impossible to track down.

So, seeing as all the reviews and my anti-reviews and everyone else’s years worth of posts on the forum surely still exist somewhere as just data, maybe someday all these Words We Left Behind will be returned, like the Enterprise C appearing suddenly through a portal to change the course of history. We should consider that All Our Yesterdays implore us… Remember Me! For if we don’t, Time and Again we will bring the mistakes of the Past Tense into our Future Imperfect.