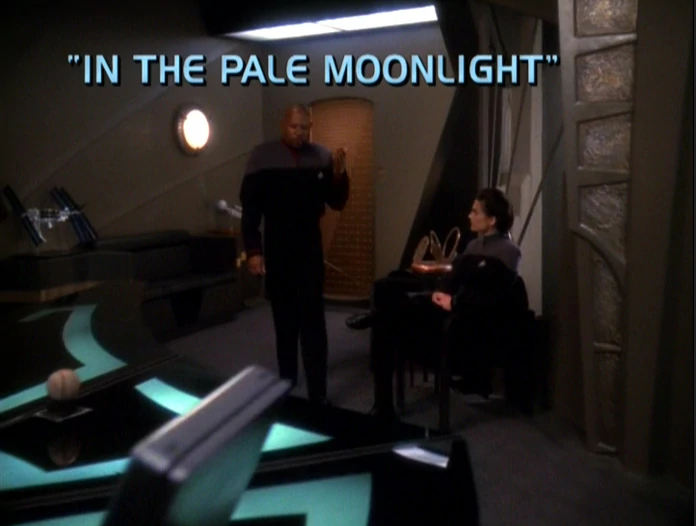 – Four Badges – “A superb and disturbing tale of one captain’s descent into ‘justifying the means.'”

2020 UPDATE – Twenty-two years later and everyone agrees this episode is a classic, still, even as it still stares into the abyss of controversy without blinking.

Normally I like to review each episode on its own merits. But in this case, I think I need to make an exception and point out how “In the Pale Moonlight” completely bettered its predecessor “Inquisition” in dealing with some of the same issues.

Carefully plotted and impeccably paced, this episode was precise where its predecessor was sloppy. Characters were clear and performances were strong where they were previously muddy. And, most importantly, the difficult issue at hand, the grappling with the committal of immoral acts for a just cause, the question of “Does the end justify the means?” is given full treatment and intelligent probing, rather than tossed out in a five minute wrap up to justify the episode’s existence. By putting a face on the issue, forcing an beloved character to grapple with it, the question becomes a real thing, a part of the difficult tides of war, and not a poorly thought out development handed to a faceless conspiracy, thrown out in a slanderous fashion for sheer thrill factor.

Central to the success of this episode is its narrative structure. The story simply would not have worked had we not been able to get inside the head of Sisko as much as we did. Much of this is due to the unsurpassed effectiveness in the use of the Captain’s log. Officially, the fourth wall isn’t broken. This is reinforced in some excellent directorial shots showing Sisko, still dictating the log, but from an angle where, although his gaze is unbroken, he is not looking directly at us. However, for the bulk of the log we feel the weight of his stare, and the burden on the soul of the man behind those eyes. Also, the references to the casualty lists bring back a sense of the war being ever-present, which has at times been missing this year. Fascinating that two of the best episodes this year dealt in part with the weight of the war on our Captain, “Far Beyond the Stars” and this. It makes me wonder what might have been had the war been front and center all season. But in this episode, it is. The invasion of Betazed brings a great weight to the proceedings, although some surveillance footage of the peaceful green hills of Betazed burning and swarming with Jem ‘Hadar might have made the moment less abstract and dependant on exposition. Considering that Sisko was telling us this story, this exposition -within- exposition didn’t increase the visceral fear of the situation much more than another posting of the casualty list.

The transformation of the plan to bring the Romulans into the conflict into a scheme to deceive them into joining the war moves forward like clockwork, at no time was there a jump that broke my belief that Sisko could take these actions, if he felt he was doing the right thing. It’s ultimate fruition was marvelous, and it really was a thrill to see Garak, and in a way, the Cardassians, get their teeth back. Garak was in danger of tag-along status after the early episodes this season, especially after the death of Ziyal. It is always good to be reminded to never underestimate our ‘plain and simple tailor.’ Similarly, the Cardassians have been noticeably lacking in guile since the invasion of Deep Space Nine. It’s also good to have a reminder of what Machiavellian dealings can go on in their heads.

Garak’s arc made complete sense, and when it is revealed to Sisko, and to us, we are swept up in the same emotions Sisko himself feels. This is due to Avery’s grand slam home run performance in this one. Sisko is often a hard man for me to step inside as I watch him. Not in this one. When Vreenek discovered the forgery, I could feel the knot in the guts that Sisko felt. The palpable fear that, in trying to save his people he had destroyed them. When the truth is laid bare, he drags us along through the anger at Garak, the internal conflict, and in the final moments of the episode, the difficult resignation and acceptance. What a beautiful choice, the ambiguity on the final “I can live with it,” and the certainty of “Computer, delete that entire log.” Whether or not he can live with it is a matter for his soul. He will live with it. Everything depends on it.

The subject matter is heady and controversial, but the situation has enough weight to it to remove us from our comfortable judgements, and place us in the barren ground of life and death decisions. A story with a plot like this was going to need careful treatment to avoid character damage, to keep from tarnishing the high opinions that we hold for the heroes of the future, the people of Star Trek. By grappling with the issues head-on, from a character-based viewpoint, and forcing us to sympathize, this episode succeeded.

I almost, but thought better of, taking points off for two plot elements. The previously mentioned exposition regarding the invasion of Betazed didn’t seem to carry enough weight, and didn’t mark a shift in the character’s attitudes (since they seemed hopeless beforehand as well), and one questionable plot element. If Starfleet approved of the plan to manufacture evidence, why permit a criminal in a Klingon prison, who turned out to be less talented than he claimed, to fashion the counterfeit, rather than bringing aboard the talents of Starfleet holoprogrammers? Especially since Section 31 had (supposedly) created such a flawless forgery the very episode before? Sure, the ball needed to be in Garak’s court, but some sort of explanation was necessary and missing.

A splendid performance by Avery Brooks, a unique and compelling narrative style and structure, and controversial and relevant subject matter handles intelligently makes this episode a standout in the series, without a single space battle.