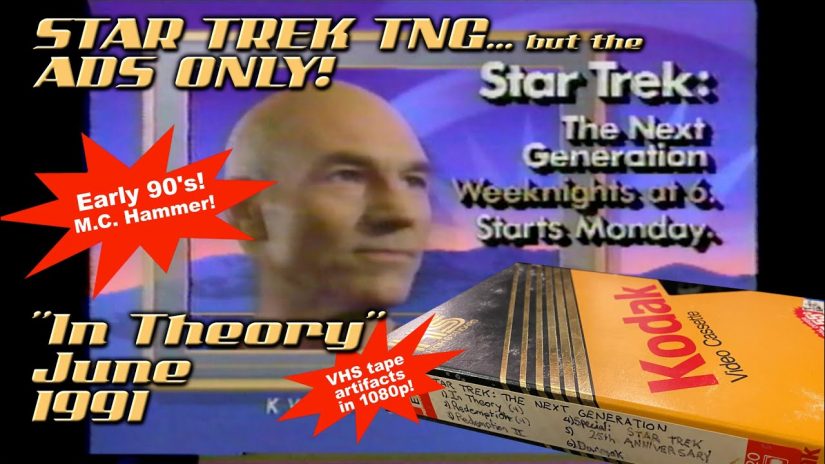 Classic episodes of Star Trek with none of the copyright-violating actual content and ALL of the ads, wrappers, teasers, and bumpers from the local independent and UPN affiliate stations who ran the shows!

Add your Contribution to the “Star Trek, Ads Only” Playlist and Project!

Like many older Trek fans, I originally “collected” my favorite set of TV series by recording them the hard way from broadcast onto VHS video tape. These tapes served me through years through many re-watches, but of course were eventually replaced with other collections.

With the pandemic bringing an extended furlough, I used some of my time to digitize a lot of old video tapes I had, including the last few scattered Trek tapes I had kept for one reason or another. In doing so, I was reminded that the Trek collections available now are missing an ephemeral element of the nostalgic experience.

These days with streaming, you miss out on the commercial breaks. Viewers of the old series must wonder why the shows came to little mini climaxes and false cliffhangers every 10 minutes. They have no idea what advertisers supported old Star Trek. They don’t get to see the bumpers, they don’t get to hear the “Next Time”‘s and see what movie or show was running before or after.

So that’s what I made, out of the episodes I had: The “Star Trek, Ads Only” playlist:

But it also occurs to me that a lot of other fans did the same thing I did, and have both the old tapes I no longer have, and the ability to digitize and assemble video (my USB capture dongle was, like $30). So, I thought it might be best to serve the goal of the playlist to open this project up to crowd-sourcing.

Do you have an old Star Trek tape, and the ability to edit out all of the copyright-violating actual content leaving only the juicy lost-to-time ad placements, bumpers, and station IDs from the original broadcast?

If so, upload a video and use the Playlist-editing link at the bottom of this article to add it to the playlist. I’ve even gone ahead and provided template vids for the “Scene Missing” replacements you would need:

Maybe we can eventually build a complete visual record of the companies that supported Star Trek with ads, back when that was required, complete with local spots and station IDs for local flavor!

Some caveats to remember:

Making it to the end of this article is the rite of passage for the COLLABORATION LINK to the playlist, here: https://www.youtube.com/playlist?list=PLDVsxveqEuccZoVXcu86c0Vs8HNQ2nxr-&jct=E38m1R1NLDZ12bw8kFUEYKDKuxLcoAe

OK thanks everyone I’m back to work and out of Trek tapes now, so if no one else adds to the project, it is done. In that case, um… enjoy!