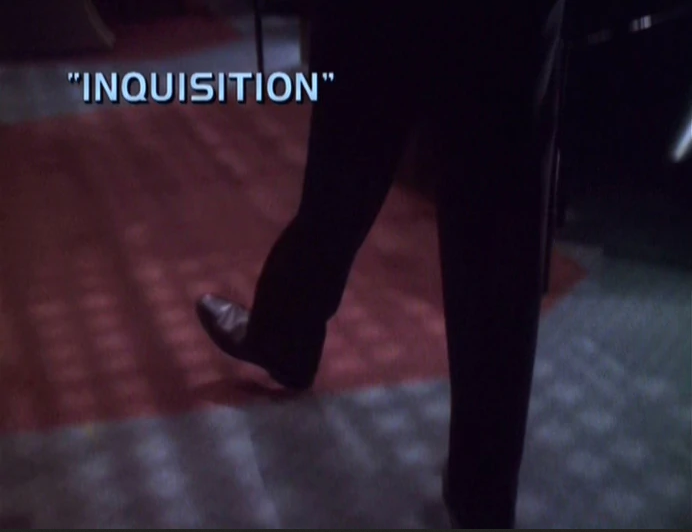 – One and a Half Badges – “A worn-thin plot introducing Section 31 ensures its role in history by tainting Trek lexicon.”

2020 UPDATE – Twenty-two years later I’m still irritated at the advent of the idea of Section 31, and the implication it has been around since the start of Starfleet. Needless to say the latest run of Star Trek has been a bit rough on me, on that front.

ORWELLIAN FARCE …is what a friend of mine aptly labelled this episode. I suppose, for the purposes of this review, I shall desensationalize my judgement, and simply label it ‘mishandled and misguided.’

The ‘someone’s using a holodeck to fool me as to where I am’ plot twist is completely overused. We had, in fact, just seen it a few weeks before in ‘The Killing Game’ over in Voyager. You also have ‘Shadowplay,’ ‘Future Imperfect,’ and, probably the best of the series ‘Ship in a Bottle,’ among others I’m sure, all filtered down indirectly from ‘The Mark of Gideon,’ TOS. This, in itself, is a minor sin. But ‘Inquisition’ ranks low even in the measure of how successful this macguffin was used. Why was ‘Ship in a Bottle’ the best? Because I didn’t see that plot twist coming. The fact that they were still on the holodeck was completely unexpected to me.

In ‘Inquisition,’ there was no way, as the story developed, you could believe that you were witnessing real life, given the doubt and suspicion the crew held for Bashir during his investigation, especially as the bridge crew turned on Dr. Bashir. When he grabbed O’Brien’s shoulder and realized the deception, and was forced by the script to actually act surprised, I nearly busted up laughing. The execution of this was clumsy and infinitely unsubtle, and so the plot twist was telegraphed a good half hour beforehand. Once revealed, the simulation of Sisko’s initial reaction, the simulation of Bashir’s room being searched, and the painting of Sloane as a man obsessed due to the death of his son, makes little sense.

Not only does Sloane reveal himself with his “you’ve refused to join me and stated your opposition to me, so let me proceed to arm you with knowledge to expose me” speech, but he permits Bashir to return to Sisko, who, before the end of the episode, is asking Starfleet questions about Section 31. Furthermore, Starfleet, obviously bad at this type of behavior, refuses to confirm or deny anything, when any competent group of individuals involved in a cover-up would of course know to deny everything. Why the nonsensical behavior that diminishes the story?

Also in this category, we have what appears to be an entirely new direction for Bashir, one that, once again seems to ignore the backstory of a man passionate about medicine for more juvenile trappings. We can only wait and see what his next adventure with Section 31 will be. At least this offers new opportunities other than continually bringing up his genetic status. Bashir may have grown as a character, but he has grown in the most erratic and difficult to swallow way of any on Deep Space Nine (except possibly this season’s ‘growth’ of Dukat). I think you can almost see the awareness of that in Alexander Siddig’s performance–because ever since his dark secret was revealed, the moping, overly serious side of the character has slowly stolen away much of the bright, charming young man that was Julian Bashir.

Lastly, the ideas of this episode are put off until the last few minutes to make room for the aforementioned hard-to-swallow deception. Therefore we are treated a terse and trite discussion regarding “Does the end justify the means?” and a shove off of all further resolution until some unnamed time in the future. This is frequently DS9’s worst habit. At least Sloane’s passion and Bashir’s indignation helped to enliven what might have been a dreadfully anticlimactic resolution.

AND NOW, THE MISGUIDED PART:

This story doesn’t belong in Star Trek, at least not in the ranks of Starfleet itself. It can and has been done with aliens (which, in many ways, are simply parables for modern humans). Witness the ominous portent of the Obsidian Order’s illegal stockpiling of military ships in ‘The Defiant,’ or the payoff with the wonderful layers of Machiavellian deception in ‘Improbable Cause/The Die is Cast’. We’ve even seen it within our own Federation, as the result of misguided individuals like Admirals Pressman and Leighton. But depicting a sweeping conspiracy within the Federation, not only cannot be properly done, but harms the franchise.

What is the point of developing a Section 31? Keeping with the paranoia of the times? With a season and a quarter left, are they really going to give me anything of merit to develop and let us see regarding this disturbing development? Are they trying to say that the harmonious and advanced Federation we have known could not have existed without this nefarious dark side ‘eliminating threats’ to it? Doesn’t this, on a fundamental level, state that the principled Federation we have known has been a sham the whole time?

Wasn’t there an important point of having humanity be past all this diminishing behavior? Didn’t that mean something once? What’s next? Racism was never really gone, either? We’ll meet a captain who won’t work with Sisko because he’s black? Deep Space Nine has done a wonderful job introducing grey areas to the Star Trek universe, and giving us new areas of intrigue. But in their song and dance, perhaps at least for this episode, they should look down to see what they might be stepping on.

Telling us it had been around since the beginning adds insult to injury, betrays the hope the Federation has always been intended to represent, and stretches the credibility of this plot twist to the breaking point. It is the equivalent of suggesting that the United States made provisions for the formation of the CIA in the first draft of the Constitution. It just doesn’t fit.

Suffice it to say—the X Files does this type of story quite well. Secret conspiracies, lies, and paranoia are part and parcel of that package. Star Trek doesn’t need to try and be like them, and in doing so, they are damaging one of the fundamental strengths of Trek. Leave the “conspiracies at the highest levels of government” to the shows in which it belongs and will be done well.

Points given are for ambition in the story (even if it is misguided), and generally good performances and direction. I’m sure there are those who will disagree, and would like to see the Federation painted in the sloppy colors of current Earth governments. To them I might suggest they try another series, as a more enlightened humanity is part and parcel of Trek. To me, this episode was just a bad idea.