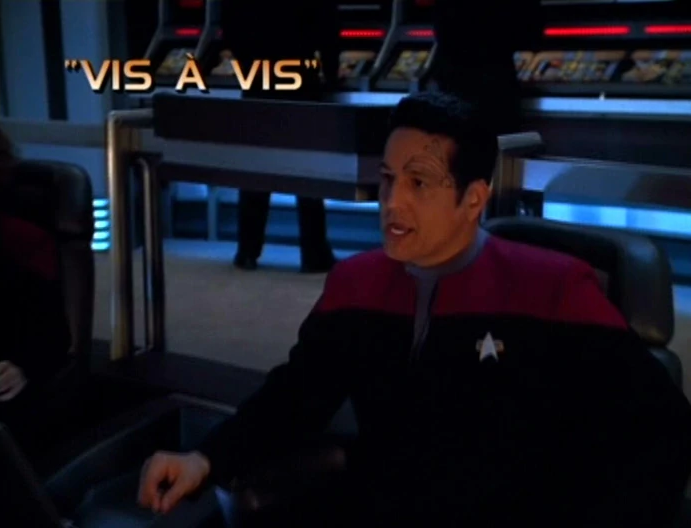 – Two and a Half Badges – “Janeway spends several hours in Tom Paris’ body and doesn’t even make ONE JOKE about his penis!”

2020 UPDATE – Twenty-two years later I don’t really remember anything about this episode, but I do remember that the suggestion I had for Paris’ direction in the review ended up coming to pass later in the series.

Well this was an interesting and watchable episode, but not really a controversial one by any means. I liked it because it went a little further into giving us some insight into the character of Paris than I expected. Especially nice was the fact that he was already having a little bit of conflict on the ship, with the Doctor and with Chakotay, before he was replaced. It makes sense that, even though a lot of his ‘bad boy’ youth was due to angst from his upbringing, that a part of him would secretly long to have that kind of freedom back and want to escape the constant briefings and responsibilities that is life on Voyager.

By bringing this up, and then replacing his character with a doppelganger that really IS a bad boy (or girl) and really is just out for themselves, the episode simultaneously brought back an element to Paris that makes him not quite fit in totally with Starfleet types, and yet shows us what about him as changed and why he has turned his life around and been able to fit in.

His relationship with Torres wasn’t deepened any, and that was a shame. This relationship isn’t invalid in and of itself, but it definitely needs more thought. The fact that Torres didn’t even suspect it wasn’t him speaks volumes. But the fact that it was a subtle distinction between Tom’s bad boy turned good and Steth’s bad boy impersonating a good boy helps me to swallow that. However, Paris and Torres need a good, deepening episode together that reaffirms that stability of their individual characters within the relationship if they are to be worthwhile. Those who complain about Torres not knocking Steth-as-Tom on his @$$ when he got out of line are dead right.

Some complaints–why even bother to still try and force him to learn medical duty? After 3 years without a medical staff, why haven’t they already trained a few other members of the crew in medical skills? Are there ethnobotanists on the lower decks who truly can’t spare the time? Why force the clearly unwilling man at the helm to do it? Because he took a medical class in the academy? Please. Doesn’t it seem clear he’d be happier in engineering?

Also, a low level of threat here. Steth took Tom because he had to, apparently, and he really didn’t have much of an agenda other than to leach off Tom’s life aboard Voyager and (apparently) sleep with the women there and be a bad boy. This was a nice contrast to Tom’s character, as I said, but it was sort of directionless and removed a sense of urgency. Of course, I could just have become too accustomed to an ever-present sense of urgency on Voyager, especially after all the Sturm und Drang of the Hirogen arc and ‘The Killing Game’. Still, it would have been nice to have Steth (neat name) have some more compelling reason to bother to learn all about Tom’s life and impersonate him, although I liked the irony that, in the end, Steth said he couldn’t stand it there.

Also, there was no reason not to pick up on the opportunity of having Janeway trapped in Tom’s body. Hell, after the resolution, it could have made for a nice bit of comedy in the denouement. Why saddle ‘Threshold’ with an out-of-the-blue Paris and Janeway breed together denouement, and not pick up on the obvious possibilities of her inhabiting his body? All kinds of clever, funny, pithy possibilities were swept under the rug!

Finally, why have the Doctor magically fix everyone (hard to believe) rather than just forcing Steth to reverse his progression through them and switch everyone back. And, for that matter, why have the female alien explain the ‘DNA swapping’ macguffin, which is hard to believe even after hearing? At least the techno babble was kept at a minimum, but, in this case, I would have preferred a little mystery about how Steth did what he did, to a pat and pointless explanation.

A nice peek into Tom’s head and how he sometimes skates on the edge of lines he used to sail right across. Torres and Paris lacked significance, which is a shame after ‘Hunters’ (of course, it took until ‘Change of Heart’ for me to really like Dax and Worf’s interaction). A study of a character I have wanted to see more of, played out in an engaging but not really exciting manner.

What Paris needs next is an issue that confronts him and forces him to see in what ways he is different from the rest of the crew, and perhaps places him at odds with them. In other words, something that opens him up like this episode, only with much greater stakes. I vote for a Prime Directive issue, as I think he would want to stop suffering even if the Prime Directive prohibited him from doing so (as was suggested in ‘Time and Again,’ 1st season).