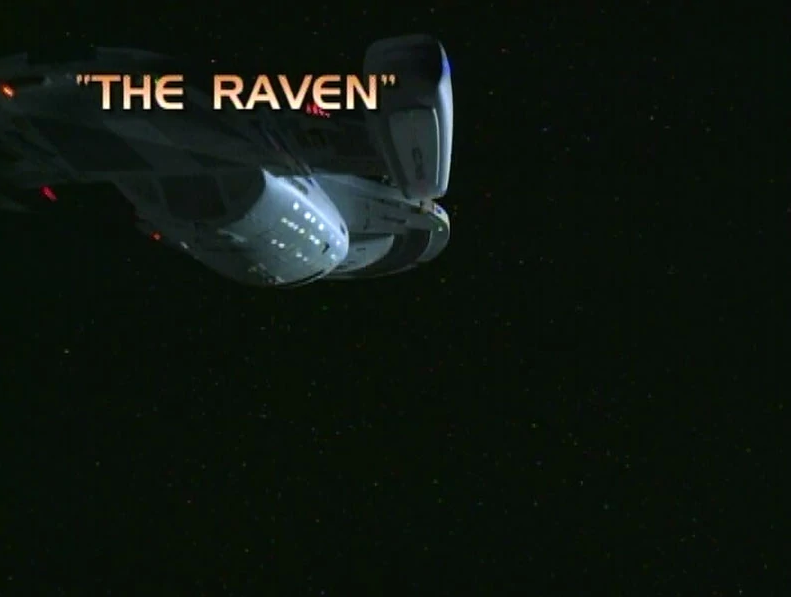 – Three Badges – “Seven kicks everyone’s ass and steals a shuttle for a trip down memory lane.”

2020 UPDATE – Twenty-three years later this remains a standout Seven of Nine episode, even as it was disappointing to explore a backstory that had been revealed via exposition rather than freshly reveal a previously-mysterious backstory.

What a detriment a promo can be to a show, eh? With all the implied presence of the Borg ( a flashback is not a return, and that goes for episodes involving Sulu, too ;> ), and the TV guide synopsis giving away the fact the Seven would find the ship she was kidnapped from, this episode had two strikes against it from the start. I try to pride myself on judging an episode as a separate entity. However, there were a couple of flaws that kept this otherwise fascinating character study from greatness.

Primarily, Jeri Ryan’s portrayal was masterful, and very moving. I can see the layers peeling away from the human inside her like an onion. The moment the child within her broke out was very powerful and nicely portrayed.

I would also like to say I have finally witnessed a believable scene in which someone escapes from the ship in a shuttlecraft. It has happened so many times in recent Trek history, it’s nice to see a crew actually make it hard for someone to do it. Minor nit: would have been COMPLETELY without flaw if, rather than bypassing the bridge’s lock out attempts by typing in an algorithm, if the Borg injectors had regenerated themselves and jutted out of Seven’s arm like they did in Scorpion. Very minor nit.

I was also refreshed by the aliens, who seemed a realistic race with an agenda of their own. Nice to see Janeway negotiating for passage, reducing the feeling that all of space is ‘international waters.’ or that they simply don’t ask and just warp where they want to. Also nice to see ‘looks like no shortcut this time.’ Heightened the sense of realism of the journey.

There were some beautiful character moments in this episode, including Janeway’s interaction with Seven, her and Neelix’ scene in the mess hall, and her slow realization of her new nature with Tuvok’s help. On almost all fronts the character interactions in this episode were on target. The one exception: this lingering tension between Kim and Seven feels forced, and I really hope that they don’t push it to the forefront, and, in fact, I’m hoping for something more interesting, like perhaps her finally deciding to remain ‘just friends’ with him while she explores herself.

My primary complaint with the episode is it involved revealing character moments to the character, and the effects of that, but nothing was really revealed to the audience. Had the infinitely comprehensive ‘Federation database’ not been quite so complete, perhaps there would have been some mystery, and we would have learned for the first time in this episode how she was assimilated. Or how about something more powerful along the lines of ‘Hero Worship’ (the TNG where the boy imitates Data, escaping the feelings from thinking he destroyed the ship he was on), where Annika might have somehow been responsible for giving away her family ship’s position to the Borg. Sure, these suggestions are problematic in themselves, but it was simply somewhat hollow to have Seven seek out something both the audience and herself already knew, even if she wasn’t quite willing to accept it.

A couple of other problems exist. First, having the doctor develop a hypospray that can halt her reassimilation is the same as having him, in effect, develop a way to stop ANY Borg assimilation. I thought that development seemed to have not enough thought behind it. Second, zero explanation of The Raven’s presence clear out here in the Delta Quad was troubling–is not the crew still interested in finding ways to get to the Alpha Quad sooner than 67 years from now? Finally, within this episode it isn’t a problem but it’s hard not to think: I am SO tired of adventures starting out on shuttlecraft. It’s starting to feel like a crutch.

A powerful, and emotional revelation of something we already knew. Nice to walk through it with this new, well-played character, but it would have been even better to thrill at the discovery of something.