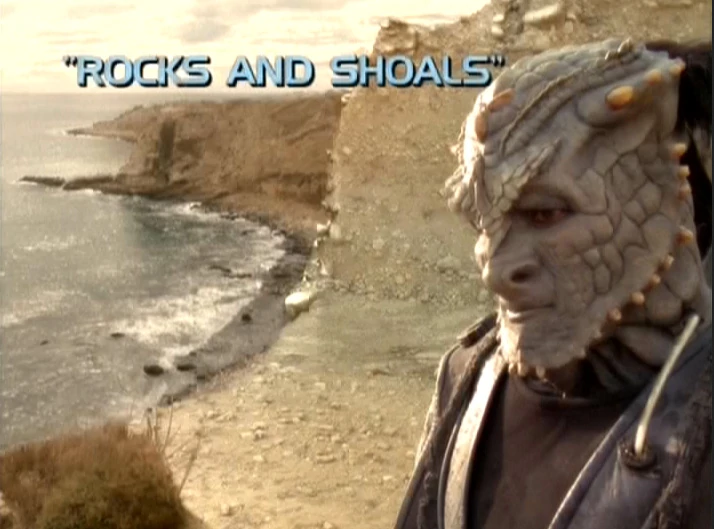 – Three and a Half Badges – “A quintessential and near-perfect pair of war stories.”

2020 UPDATE – Twenty-three years later this episode still stands as some of the best of Deep Space Nine’s darker side. It doesn’t get celebrated as much as some other episodes, but it was key to making the Occupation of Deep Space Nine one of the most powerful arcs in the series.

This is one of the most refreshingly solid and well-rounded episodes of Star Trek (any series) that I have seen in a long time. It also contains one of the best treatments of a B-story I have ever witnessed. The timing of each story was perfect, and the way they played off of one another, was also quite well done.

Fascinating, and surprisingly touching and funny character moments peppered an intense tale about War. It’s about time, after the previous week’s foray into massive plot download, to find a DS9 that had the time to tell the tale at the speed the tale needed. The B-story scenes aboard the station were especially adept at telling a lot of story, not in scenes of dozens of lines of rushed exposition, but in a long, slow pan across the Operations that Kira had somehow accepted as her new ‘place of work.’ Use of slow motion in this episode was sparingly well placed, the hanging of the Vedek, the gunning down of the Jem ‘Hadar soldiers, and thus very powerful and effective.

The A story on the planet was a marvel, switching from a tale of suspense to a clockwork of doom when the Vorta announced his intentions. Sisko’s understanding for and empathy with the 3rd was almost a little too abrupt, but the fine performance by the 3rd justified it almost immediately. The feeling at the end is very clear that if Sisko had suffered a little longer, had lost one more man, that the Vorta would be rotting on the ground with his soldiers. I for one am glad Sisko resisted, and of course, the Vorta said the right thing. If he had two more vials of white, the Starfleet team wouldn’t have had a chance. Manipulative, treacherous, the Vorta was the center of evil for this episode, constantly seeking each personal victory. He should never return to Trek, and this performance should stand undiluted.

Less cut and dry, however, was the Kira B-story. It is such a perfect tale of realization for her. After years of shifting political alliance, wormhole anomalies, etc. she finally realizes she is sitting in a position she is familiar with, only somehow, she has ended up on the other side of the fence. The eloquence of this arc was exemplary, especially in her final speech “This is about ME.”

My only complaint, the half point I deducted, was due to this arc. Surely in her discussion with the Vedek, Kira could have mentioned how it WAS their religious icon, the Emissary, who told them to remain neutral. Would this have affected the Vedek’s behavior? Or is there reduced belief in the Emissary’s judgement? I can accept any rationalization I want, because the truth is I wouldn’t have wanted it to turn out any different, but the total omission of this fact from that arc cost them half a badge.

Other than that, that’s it. Action, drama, humor, character, and something important to say that stretches your horizons. This episode holds some of the best that Star Trek has to offer. Kudos.