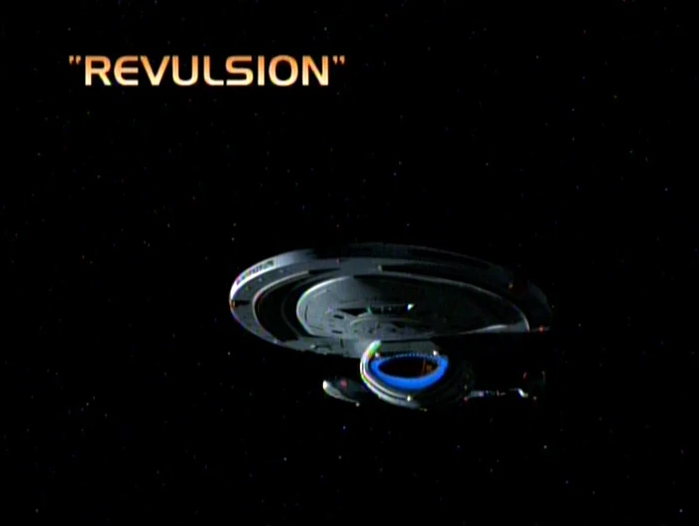 – Two and a Half Badges – “Kim blows his ONE CHANCE with Seven and a lunatic hologram goes all Norman Bates.”

2020 UPDATE – Twenty-three years later this episode still lives in my memory because of the fantastic guest turn by Leland Orser as Dejaran the mad hologram. He’s one of those genre artors who can always be counted on to turn in the perfect over-the-top moment, like he did in the otherwise limp Aline:Resurrection.

A somewhat schizophrenic episode, this tale had the makings of a classic but seemed to back down in crucial places. Although I found both the A and B stories involving, I believe in both places the setup was superior to the follow-through.

First up, the A story. I found the concept of a murderous hologram intriguing, and certainly better motivated than the Doctor’s venture into evil last season. The motivation, the revulsion towards organics felt by the hologram was a solid motivation, especially when revealed in the marvelous scene of over-the-top insanity when the Hologram ends up screaming at B’Elanna. Subtle but important were the feelings behind “I’m not trapped, You’re the one who’s trapped.” (or something to that effect). I was really beginning to enjoy this story line at this point as it seemed to me a straightforward horror tale in space, especially since the hologram’s guilt was revealed in the teaser and not kept as a surprise.

But the ball was fumbled in a few key points, and in going for more of a suspense tale in its closing, they failed to pay off the fear and dread that opened the tale. First: B’Elanna’s discovery of the dead bodies on the lower decks was old news to us, and had no impact. It would have been more powerful if the ‘isomorph’ had simply snapped and tried to kill her and the true nature of his mind be discovered afterwards. Also, the heart squeezing scene lasted too long to be effective. A couple of seconds, rather than lingering on it, would have made the injury and the fact that B’Elanna wasn’t dead more believable.

Second: No final moment of horror was revealed. I had high hopes when the ‘isomorph’ mentioned he had learned to program many things and showed off his holographic fish. Imagine the suspenseful scenes that could have been put together, using a few effects of course, as he transforms into some hideous beast, an outer reflection of the inner monster, to kill her. Didn’t he say he was ashamed to be made in her image? Why would he then choose to remain that way? The fact that he could walk through a door was no surprise to any of us, but if he had passed through that door as something else, something totally deadly and terrifying, it would have sent this episode over the top and given it a shot at a true Star Trek horror homage.

Now the B story: What can I say? If I were Kim I would have said yes to the offer. No, no, I’m kidding. But in all seriousness, this part of the episode also didn’t go as far as it should have to follow through it’s setup. I’m finding Seven (somewhere I hear George Costanza screaming “that’s MY name, it’s MINE”) to be quite an interesting character, and I thought the brief resurgence of subtle humor she displayed was really very nicely written and played. What was missing from this, and, unfortunately, what the writers were going for, was a very alien feel from Seven when she “responds” to Harry’s advances. She was direct and unemotional, true, but we were missing a feeling of Borg sexuality. Her explanation that the Borg had none was problematic for two reasons: First–the Borg queen practically oozed it in ‘First Contact.’ Physical pleasure is not alien to them, it is, in fact part of the flesh. Second, the first time we EVER saw the Borg there were Borg babies. So I had this idea in my head that the Borg did have sex, but since they had no individuality, sex to them was like masturbation to us (don’t ask me to explain that any more than I have). Who knows what it involves? It might seem like a nit, but one more line from her, something like “well, we don’t have all the necessary equipment here, but I’m sure we can replicate what we need,” would have been enough to push it over the line. That would have made it seem quite a bit more intimidating, and a lot more believable that Kim would bolt like he did after SO many years of sleeping alone.

Two premises, totally separate and disconnected, nicely set up, yet not followed through as best they could have been. Still suspenseful and involving, with a great guest star performance by the Mad Hologram, but still shy of greatness.