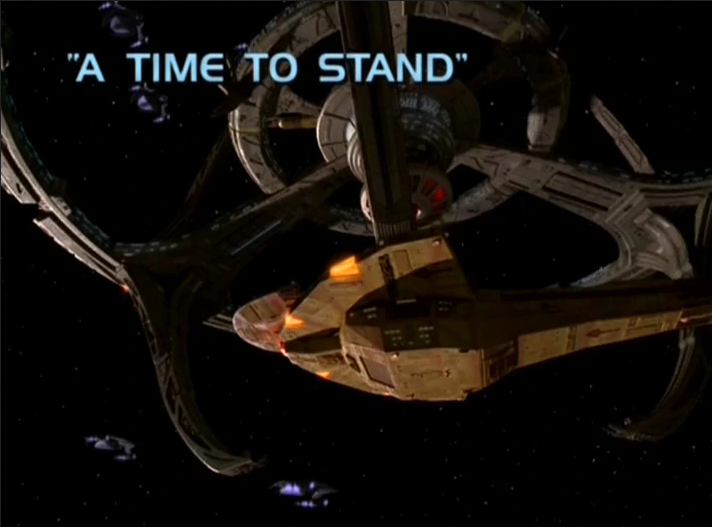 – Two and Half Badges – “A stumble at the starting gate of the sixth season, that does its expositional job.”

2020 UPDATE – Twenty-three years later, no one cares that the first episode of one of the most epic arcs in DS9, namely the Occupation Arc, didn’t stand very well on it’s own. I still stand by my opinion that opening with the limping retreat of the Starfleet, eh… fleet was an irritating follow-up after closing the last season by seeing that Starfleet fleet charge in to the rescue.

Okay. There were a lot of things in this episode that I really liked, as well as a few things in this episode that I really wished had been approached differently. This is common for me with both Voyager and DS9. But the one thing that really hurts the score for this episode is that the things I really liked about it were incomplete, were brought up and not followed through on, or were revisited since the season ender and not advanced much. This episode reminds me a lot of The Circle, which opened the 2nd season’s 3-parter season opener. Without a ‘To Be Continued’ at the end of it (and based on Ron Moore’s postings), I assumed this episode would hang together as a separate story. My problem with it is I didn’t feel it did, at least not very well.

So people like continuing story lines that move from episode to episode. Look at the following B5 has maintained. I like to see threads picked up and advanced, but in an episodic nature. I don’t feel this installment did so well at that, but I have a feeling I will see better completion of that in the following 5 episodes of the Dominion/Federation War arc.

First, the good things. The stakes are continually raised, and the tension is indeed very thick. The Dominion’s occupation of Terek Nor is turning out to be a fascinating arena for conflict and character discovery, especially in the blooming relationship between Odo and Kira. I could not think of a more perfect venue to put them together in than playing high wire with Dukat on one side, Weyoun on another, and only each other to rely on. It’s really nice to see a non-business as usual situation for them to explore each other in, one that takes less alternate realities than it took to get Worf and Troi together. The subtle shift in position when Weyoun asked his favor of Odo, and Kira’s reaction to it, was handled very deftly and had me dying to know what happens. Well done.

Also well done was the Kira/Dukat dynamic. This has been brewing for a long time and it’s good to see Dukat finally feeling he has a strong enough hand to play. I find it so ironic that he has no idea that when he was alone, powerless fighting the Klingons, he probably came the closest he ever would to charming Kira. Now her revulsion is complete, and Dukat’s failure to understand or accept the consequences of what he has done, not just for that relationship but for Cardassia, will certainly play out very interestingly. Also, I like the longer hair (nice parallel, Dukat letting his hair down).

Now, what didn’t work: Jake. Although the hand-wringing on the part of Ben Sisko telling his dad was solid, to flash back to the station and see Jake whining about his interview, completely unintimidated by the Jem’ Hadar guards and Weyoun, was a mistake. I realize what they are playing out regarding the Dominion occupation being not the horror they thought it would be. But for Jake to already start to fall prey to Weyoun’s games, and for him to face no threats or make no moments of decision (perhaps to find a way to get his reports out WITHOUT Weyoun’s help) weakened his role. This may be rectified later, but I would have rather seen it in a later episode and be kept waiting than to have a little blurb keep me informed, without presenting much of interest.

Also a let down: the teaser. I was appalled that the whole charge of the Federation fleet was played out off screen, supposedly months earlier. To open on the limping fleet certainly told what happened, as did all that exposition on the Defiant, but did NOT address the ‘yes, let’s charge in and kick their butts feeling’ I had at the end of last season. The teaser really should have opened with the defeat of that Federation fleet, or SOME Federation fleet trying to take back DS9, and then flashed up with a ‘3 Months Later.’ I understand budget limitations, but to follow up that kind of an ender with such an action-free opener was quite a disappointment. In this area, “Scorpion Pt. II” set the season off with a satisfying bang much more than DS9 did–the first time in History I have been able to say that.

What was good but not great: Sisko’s mission. Loved to see that captured Jem’ Hadar ship put to good use. Also relish the future ramifications of the success of their mission. But the mission was just too straightforward and thus kind of dull. All parts of it, the attack by the Federation ship, and the bombing of the facility, were underplayed to allow room for all the other plot elements. I think that we will see the plot elements separating themselves out in future installments, though, so I hesitate to judge harshly.

Overall this was an episode that had a lot to address and live up to. Everything left hanging was touched on in some form or another, and a few nice new developments were brought into play. But as an episode, by itself, it succeeds about as well as The Circle did, and probably should have been left with a ‘To Be Continued” at the end. Most points deducted for playing out the part of the story I was most riled up for, the counterattack by that Federation fleet, off screen, and in general for letting the exposition carry the story more than the plot.