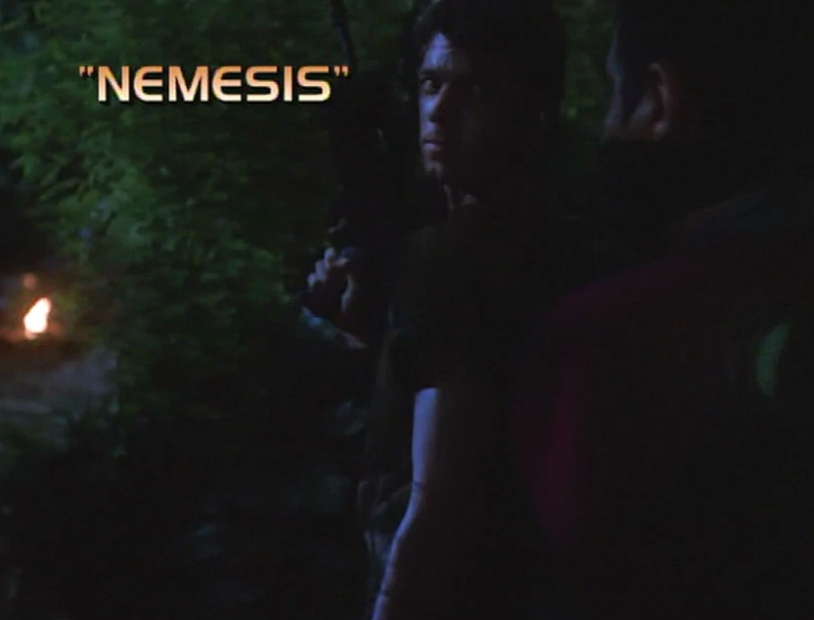 – Three Badges – “Chakotay joins a resistance without even a single Cardassian in sight.”

2020 UPDATE – Twenty-three years later I think I went kind of easy on this one. People mostly seem to remember the weird language and the predator faces. It really is a sort of obvious, by-the-numbers Star Trek twist story.

I found the episode involving and consistent with Chakotay’s character. Chakotay did not choose life among the Maquis any more than did any of the others, he was forced to defend his homeland, to return home and protect his people from the cruelty of the Cardassians. His careful neutrality, his high-minded ideals so easily shared at the beginning of this episode were, to my mind, what he truly wanted to believe. Bearing in mind that Chakotay WAS a Starfleet officer before the formation of the DMZ, I felt that this was how he truly wanted to respond to war, how he felt he could, finally, respond to a war since it in no way had a personal stake for him.

I admired the careful increments this episode used in unraveling Chakotay’s neutrality. I respected and believed the shifts he underwent, and did not feel, as I was afraid from the promo, that there were any sudden unmotivated shifts. I could, in fact, put myself in his shoes and see myself doing the same things.

I also found myself coming to admire the culture he began to sympathize with. I had no feelings that the language was hokey and forced. I assumed the universal translator was, in fact, doing its job correctly. In English we say “My Name is Kirk.” In Spanish that is communicated with “Me Llamo Kirk.” But the literal translation is “I Call Myself Kirk.” I found it not only a nice touch, one that should continue in different variations in the future, but it also lent their race an air of intelligence and dignity. Funny what some different word choice can do. (I do have to say that I’m surprised that no one else had a sick enough mind to bust out laughing when the commander told them to “Close their glimpses, and dream of your mothers and your sisters!”)

Finally I feared the episode was good but predictable when the unpredictable happened: the ‘indoctrination’ plot twist. Bonus points for surprising me, as that is a rare Star Trek occurrence. Although it did exactly message-wise what I hoped the episode would do, and effectively wrapped up the episode, they get one point off for ‘teching out.’ A more biting and realistic approach would be to have both sides be the Nemesis. War is horrible and there were American soldiers in Nam that could have stepped right into the shoes of the Nemesis as they destroyed that village. If there was no tech, and it became apparent that everything HAD happened as was seen, but yet the Vori (?) were somewhere out in that jungle exacting just as much horror and suffering on the Predator faces, then THAT would have made the lines blurry and unclear, and the episode more involving.

Finally, 4 nits that exact another point off: 1) They should have been clear about the method of indoctrination. Holograms would have been more than enough by themselves. 2) Chakotay out on a shuttle survey alone. I can understand the difficulty of isolating a character, but I find it questionable to let your crew run around uncharted space alone in a shuttle craft. They should be guarding their crew AND their shuttles more closely. 3) Who’s moron idea was it to let ambassador Predator face walk right up to the recently brainwashed Chakotay? Did they think he was just going to shake it off like that? How can they possibly act surprised when he stared at the ambassador with rage? 4) The makeup for Predator face was, although effective, obviously derivative. A better choice might have been a ring of Cthulhu-like tentacles around the mouth. Just as creepy, less a copy.

An involving and thoughtful exploration of how war, once set loose, can destroy peacefulness and tolerance. A tour-de-force performance for Robert Beltran, who once again shows the depth and intelligence within the character of Chakotay that can really impress when given center stage. Somewhat blurry in terms of message due to a techno ending, but also more unpredictable due to the same.