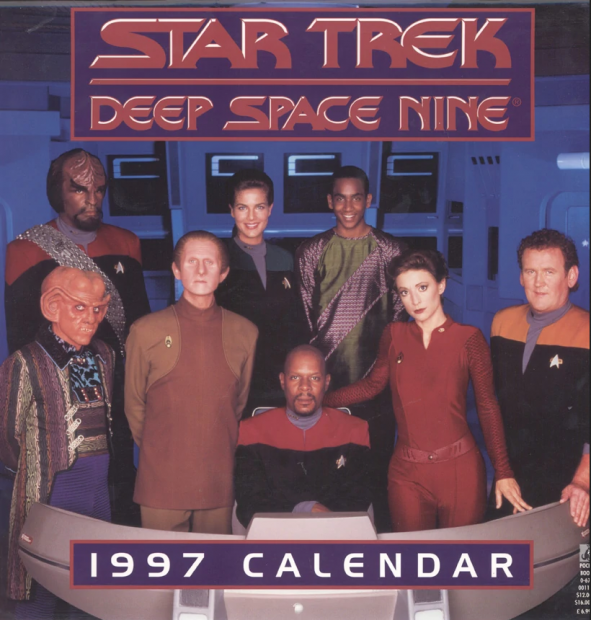 2020 UPDATE – These Star Trek reviews/opinion pieces were originally written as forum posts on the old Trekweb.com forums, back when Deep Space Nine and Voyager were still airing first-run. Those forums are now long gone, so if these passages start a bit abruptly or seem to continue an off-screen conversation, at least you know why even if the surrounding context is lost to time.

I have been a fan of Star Trek since my first exposure as a child, watching the animated Star Trek series (really!), and then crossing over to the original series. My enthusiasm for the show stems from its hopeful view of the potential of humanity, and I have followed and enjoyed all the modern series and movies as well.

TOS and TNG are past. Their success in television is documented, their strengths and weaknesses, although certainly subject to debate, do not really have a reflection on the quality of Trek shows as they exist now. They do effect the success of Trek shows now, but I prefer to examine merits rather than public recognition. Therefore, in looking towards the future, I prefer to examine the shows that currently are running, and are the subject of debate.

That said, there is one thing I want to point out regarding TOS and TNG: both shows had a unique situation–two characters who completely blow away all others in Trek. I am, of course, referring to Kirk and Spock in TOS, and Picard and Data in TNG. These characters reflect an almost magical coincidence of concept, direction, and performance, that is rarely seen on ANY television show. They were all not only played by fantastic actors, but by actors who seemed to fantastically fit within the skins of the characters. All too often, this fortuitous benefit happened by luck. We all know that Kirk was brought in at the network’s request to replace Captain Pike, Roddenberry’s original concept. Spock was nearly axed by the network (imagine TOS without Spock –shudder–). Data seemed to be constant in direction, but Picard was certainly harder edged early in TNG, and Patrick Stewart was considered for the role almost by accident, a consideration that Roddenberry originally scoffed at.

Neither of the subsequent shows has been able to duplicate that magic. They have tried, for sure, but that clicking home of an actor and character that are simply PERFECT together, AND evoke a deep and almost subconsciously sympathetic response from the audience, hasn’t happened. They can’t be faulted for this, really. It was blind, dumb luck that it happened in the first place. If this was the reason I watched Trek, I would have dropped out of both series a while ago.

Not me. I watch Trek for consistently thought-provoking sci-fi, a bright and hopeful view of a diverse and peaceful future for humanity, unparalleled adventure in television, engaging characters and performances, and a perspective shift that allows me to view the problems of modern humanity from a viewpoint that stimulates objectivity. In this respect, there has not been a single incarnation of Trek (yes, even the Animated Series) that has let me down. The spin off series may never rival TNG in terms of success, but, in many ways, they already do and will continue to rival it in terms of quality television.

It’s amazing how the incarnations of Trek reflect the personality traits that are ascribed to human birth order. We are already well aware of the Parent and the First-Born:

Deep Space Nine is easily the most unique Trek series. The premise has forced it to be that way, with, I’m happy to say, good results. DS9 has, due to its stationary setting, replaced adventure with intrigue. It has done away with the need to move on and encounter the New, replacing it with a steady raising of the stakes in the conflicts of the Known. Sometimes darker, almost always more morally ambiguous, DS9 chooses to go it’s own path. Sometimes DS9, like a middle child, will reject good advice for the sake of doing its own thing. Constantly changing, the show does not feel the need to ensure duplication of success of the first-born. It has decided that the uniqueness of its path is its own reward.

As drama, DS9 is involving, but rarely transforming. It’s characters are constructed in subtler forms of hues and texture. Their arcs and advancements deal more with how they relate to the world around them than how they relate to and understand themselves and their own humanity. Due to this, they do not invoke archetypes that the whole of the audience can connect to. Conflicts are dealt with in small, pointillist constructions that add up to a total picture, as opposed to the bold, sometimes overly strong strokes of the other series. This, more than anything else, gains DS9 an unwarranted reputation for being a serial, because, although it contains extended plot lines, the show is still episodic at heart. Like a John Irving novel, scenes (episodes) of powerful import and scenes (episodes) of little impact add up to the most complete, if somewhat meandering, picture of a place in the Star trek universe as we have ever seen. Also like a John Irving novel, many times the completeness of the picture is its own reward. Yet, also like a John Irving novel, if one is not engaged, or lacks the patience to stick with it, much of the appeal of DS9 will be lost.

As television, DS9 is hit and miss. One truly must be a regular viewer to understand the appeal. Dropping in on a ferengi episode and then dropping in on a plot advancing Dominion episode will leave one confused as to the identity of the show. Indeed, DS9 has many identities, and many times has seemed almost anthological in nature. The continued plot lines, not being planned in advance, often wander in ways that defy internal logic, yet never fail to surprise. Characters have advancements and developments, but not necessarily cohesive through lines. In many ways, this makes DS9 very lifelike, but sometimes detracts from a sense of dramatic completion.

I predict DS9’s final season will be it’s most crucial. A pointillist painting is (pardon me) pointless if the whole of the image does not come together. DS9 is charged with the task of bringing cohesion to the sprawling set of alliances and conflicts it has set up as it’s personal playground. In a series that is almost better taken as a whole, one thing is certain, the resolution of the series carries more weight. It will require quite a bit more than a two-hour episode, in my mind. Indeed, you cannot continually raise the stakes and advance your character conflicts incrementally without an implied promise of closing it up in a way that brings it all together. If DS9 does this, it will have made one of the greatest achievements in all of Trek, and will remain my favorite Trek series. If it fails, and lets far too much spiral out into nothingness, I will be greatly annoyed, and bring TNG back up to #1 spot.

After all, intrigue is nothing without revelation.

Voyager doesn’t know it’s own strength. Voyager roared out of the gate with an admirable confidence, and all too quickly found itself wondering what direction to go in. Much like the Baby child, Voyager envied and wanted to walk in the footsteps of the first-born, to the point that it lost its own identity for a while. A promising set of characters and a unique location quickly gave way to familiar and friendly crew dynamics that felt uncomfortable on this set of characters, and an array of encounters and plots that dovetailed directly in from TNG, but didn’t fit as well in the new show. Like the Baby child, Voyager has taken longer than any other Trek series to find itself and it’s own place in the sun. Voyager’s saving grace is, and always will be, cinematic adventure. By embracing this, Voyager is coming through the shadows of its predecessors and finding its own path to greatness.

As Drama, Voyager is hit and miss. Voyager’s biggest benefit, given its initial falter, was it’s episodic format, it’s ability to attempt something and then drop it if unsuccessful. Oddly, this was eschewed in favor of an extended plot line about an uninvolving race of aliens. Once this was jettisoned, Voyager was free to explore and find its voice. Unfortunately, it took a long time to happen, and only this season has Voyager’s voice emerged as unique and all it’s own. Voyager has always been able to deliver strong and powerful hours of episodic Star Trek, only more sporadically than its predecessors. Some of the stories it has tackled are bolder and more relevant than the others did. Sometimes, these episodes were a complete success. Other times, they lacked an air of grounding in the human condition, taking more of a ‘Starfleet’ viewpoint, because the character viewpoints were not quite clear.

Voyager’s characters were originally painted in bold strokes, but fleshed out in weaker, more unsure motions. Character relationships did not do much to advance character arcs, and yet there was little internal exploration. For the longest time, the Primary characters seemed like the more background bridge crew of TNG. I like Kim and Paris and Tuvok just as I liked Crusher and Geordi and Troi, but what did I really know about them? More depth, more pathos, is still required in these characters. They are engaging, but if they are not going to advance themselves through external conflict (as DS9 did and as Voyager’s premise seemed to promise) then we must see more of the conflicts inside their heads.

Yet it’s amazing the difference one episode, or one character can make. Who fully felt what Janeway’s viewpoint was until we saw it in conflict with Seven’s? Who really felt the strength of Janeway and Chakotay’s relationship until it was tested in ‘Scorpion?’ Can anyone tell me, right now, how Kes viewed the world around her? Every relationship in the show has somehow seen a boost from the change in dynamics that Seven’s introduction has brought around. TNG didn’t succeed on relationships. I think Voyager has finally learned that it cannot succeed in the same ways TNG did.

Elements are falling together, and a unique hour of drama is solidifying its identity.

As television, Voyager has rarely failed to interest and entertain. Never boring, Voyager has proven itself the king of cinematic adventure tales, often rivaling the Star trek Movies. Voyager’s two-parters are consistently better than those of TNG, and it’s biggest flaw in adventure plots in that it often unearths more than it can resolve in an hour. The Hirogen arc has proven that, even with a two-dimensional enemy, by playing with the episodic format, Voyager somehow can free itself to produce more interesting television.

I predict that Voyager will continue with its Renaissance. The introduction of Seven will spur more risks by placing the other characters in conflict, and putting a great deal more flesh on their bones. The adventure angle can and should continue, but episodic explorations of deeper issues MUST remain. The quality of the two-parters and the arc this year will open up the ability to let the format fit the story, and not vice-versa. Using this flexibility, Voyager could finally break new ground for a Trek series and find its unique dramatic voice. This voice would better fit the premise of the series, and permit a depth in storytelling that, after the Kazon arc, Voyager has hesitated to tackle. Finally, Voyager should be able to combine its two modes, and create a two-parter or extended arc that tackles a daring and relevant issue, proving itself as a forum for ideas as well as adventure.

After all, you can’t have adventure without risk.