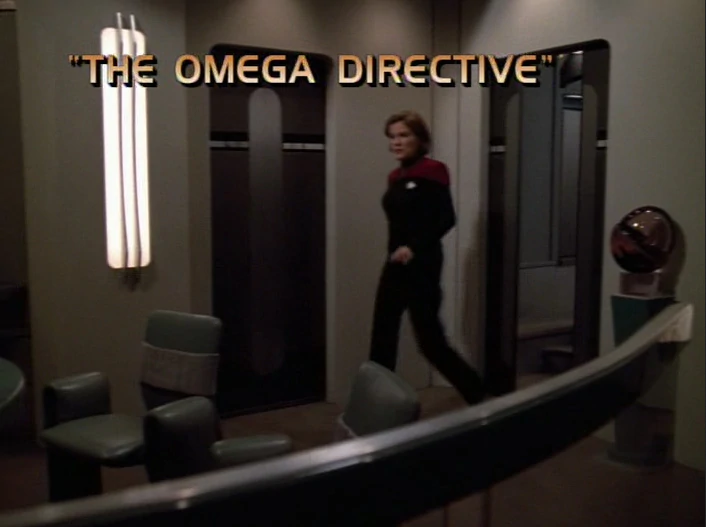 – Three and a Half Badges – “The god/perfection/molecule thing is tenuous but for God’s sake! They’re finally on a mission!”

2020 UPDATE – Looking back on my review from twenty-two years ago, I was too kind to this episode. It may have been replete with nice character moments but really it’s only innovation, and a good one at that, was the presence of Starfleet missions for the Voyager crew inside the computer, directives that could still be compelled to act upon. This plot twist wouldn’t really return, and the god-particle Borg stuff was kind of nonsense. Still, a fun episode with a sense of welcome purpose.

One of Voyager’s finest. An intriguing and controversial premise. An original plot. A fascinating central theme looked at from a new direction. Wonderful character moments. This one had it all, folks. But, not only were the parts superb, but everything seemed to gel nicely in this one, with a clear narrative voice that came through like a breath of fresh air.

Personally, I am intrigued by the presence of the Omega Directive, and it’s nice to see some of Starfleet’s aims and missions rounded out a bit with secret little goals like this one. That the Omega Directive, in order to prevent the loss of space-faring civilization as we know it, overrides the Prime Directive, was logical and not as much of a concern as I thought it might be. Now, say, if they had to kill the scientists to eliminate all traces of Omega, that would be out of character for Starfleet.

One of my favorite things about this episode is that, due to Seven’s unique perspective on Omega, it didn’t just hover on the surface, as a ‘capture the Omega’ action story. As someone else mentioned, I’m glad this developed into a way for the characters of Janeway and Seven (and Chakotay) to gain a greater understanding of each other. The conflict was there, but it went in a different direction than in Prey. That was nice to see.

The structure of the Omega, and how its perceived perfection in the Borg’s eyes made it a spiritual entity for them, was an interesting angle. Seems logical that the Borg could have something like that, but have arrived at it through discovery and assimilation, and not faith (unless you include the faith that they can stabilize it). This is part of the advantage of having Seven around, learning things about the Borg that the Borg Collective would see no need to tell you (you want to learn about us, well then you will be assimilated). Again I am gratified that Seven’s ‘assimilation’ into human culture is not being rushed at all.

Finally, as others have pointed out, this episode was replete with great character ‘moments,’ something which Voyager hasn’t consistently excelled at. Kim & Tuvok playing Kalto was a nice moment of continuity, I agree. I also much appreciated Janeway and Tuvok’s small scene on the planet, and Tuvok’s surprise at Janeway’s steadfast disapproval of any study of Omega. Her line “I am a woman who occasionally knows when to quit” was a nice subtle piece of continuity from her discussions with Chakotay in ‘Scorpion,’ and flowed nicely from her decision earlier to take his advice and not attempt the mission by herself.

Paris/Torres was nonexistent and, seeing how I didn’t miss it much, I’m beginning to wonder if that thing will gel in a rewarding fashion. I think I will enjoy P/T more if it is much more occasional and definitely more meaningful when it does take up screen time. I imagine Ms. Biggs-Dawson was having her baby sometime during this episode. Anyway, anti P/Ters will surely appreciate its absence from this outing.

The only points I’m willing to deduct are for slightly wonky science involving the Omega molecule and it’s power, less concern than I would have liked to see about the pursuing aliens and the safety of both their ships and society, and some weakness in Chakotay’s attitude toward Seven, which seemed slightly out of character. Of course, maybe he’s just a sucker for that face of hers (I am).

Finally, this episode simply opens up a lot of intriguing possibilities. I hope this is not the last we see of The Omega Directive. Even further, I hope this is not the last Starfleet-ordered task Voyager embarks upon. Perhaps if they could reactivate that array, they might be directed towards a specific task here and there. There was just something very satisfying about that last moment on the bridge when Janeway, for once, was able to say…