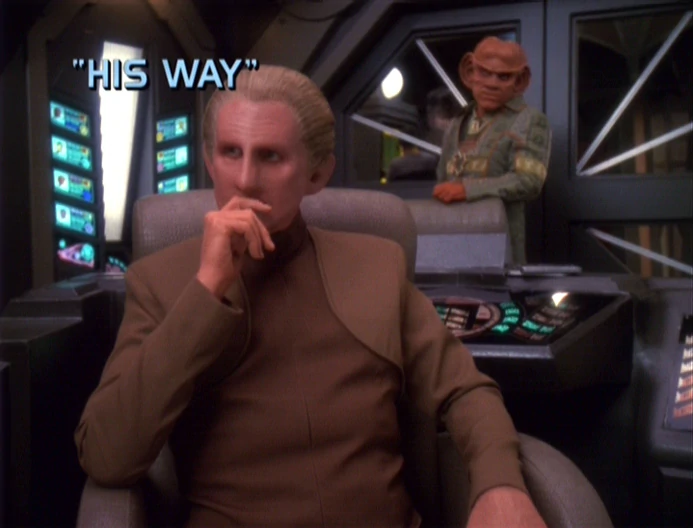 – Three and a Half Badges – “A classy and age-old story that nonetheless brings Odo and Kira together beautifully.”

2020 UPDATE – Twenty-two years later when I think of this episode I feel I was too hard on the Odo and Kira relationship, which developed nicely for the rest of the series. But as much as I welcomed Vic Fonatine’s influence here, I’ve read some fans that feel he was too heavily present in the last two years of the show. I don’t agree, I still found him a delight.

Recipe for an Odo/Kira love story. 1 Part “New York, New York.” 1 Part “The Nutty Professor.” 2 Parts “Much Ado About Nothing.” Add a dash of good music and a sprinkle of good natured dismissal of past conflict. Shake leisurely and serve over ice. Certainly not the drink I expected, but it went down easy and had good taste all the way to the bottom.

First off, even though this is a very old story–shy guy caught in the ‘friend zone’ has super cool buddy show him the way to capture the attention of his heart’s desire–I was surprised at how well it fit. Especially with Odo. It really was a joy to see him loosen up a bit, not to mention to see him in a tux (even if he WAS the tux)! This was, in a lot of ways, the best part of the story. The last time we saw this kind of FUN coming out of Odo was when he embraced his shape shifting abilities after finding his people in The Search, Part 2. This episode, unlike the previous, didn’t end on a down note, however. Surely Odo takes a close second to O’Brien as the most tormented soul on Deep Space Nine. It’s nice to see things go “his way.”

Vic Fontaine was a pleasure to meet. True, further issues pop up of how wise or ethical (not to mention believable) it is for holograms to be made that seem to be fully sentient, but the sense of harmless fun that oozed from the guy seemed to wash all of that away. Let Voyager explore those issues with the E.M.H. Even technical issues of his access to the comm system and holosuite access seemed insignificant. Darren wisely held Vic in check, keeping him from spilling over the top, focusing on the man’s practiced charm. The venue was as charming as the man, however, perhaps a hazy mist of nostalgia helped to obscure some of the deeper intricacies of the story.

This is really the episode’s flaw. Much like the love story between Beatrice and Benedict in “Much Ado,” there is so much time focused on the contrivance that gets this unlikely pair together, there is no dealing with the actual ideological differences between them, or the things that have kept them apart. Kira’s arc, in particular, suffers from this. There really isn’t a solid reason for her turnaround in interest in Odo, and the “moment of clarity” scene with Dax felt particularly contrived. What inspired this “moment of clarity?” The fact that Odo thought he was wooing a simulation of her in the holodeck? She had known for a full year that he was interested in her. How does the revelation that he is privately wondering what to do about it change her response to those feelings?

We can only hope that in the future, some of the things that have come between these two will come out in the wash, because they didn’t even make an appearance in this episode. That wonderful kiss in front of everyone on the Promenade had been such a long time in coming, however, I just couldn’t help going along with it. As much as I enjoyed the ride however, I can only hope that the next love story about them really is about Odo and Kira, and not about any guy and some doll.

Fun but shallow, this long-awaited love story gave me the spirit of everything that I wanted, but skimmed right over the depth and the details. Like an intoxicating encounter in an atmospheric club, the venue for the encounter ended up meaning more than the players. But like Vic might say, sometimes you gotta “go with the flow.”