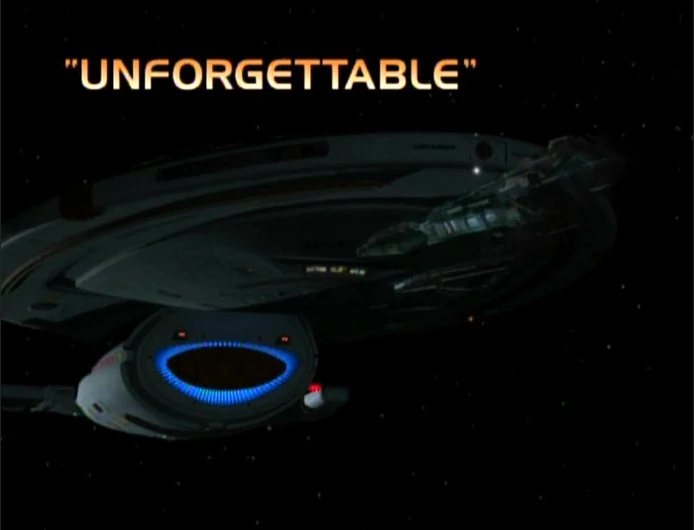 2020 UPDATE – I’ve rewatched Voyager at least three or four times in the last twenty-two years and I still remember nothing about this episode except Virginia Madsen guest starred.

First of all, I’d like to say this episode provides another reason for me to chastise myself for reading the spoilers before the episode airs, because I was expecting scenes that obviously didn’t make the final cut. I can hear the J/Cers sharpening their spears and lighting their torches now…. 😉

Anyway, I can see why the cut scenes were indeed excised, because time was a precious commodity in this episode. It was utterly crucial to the plot that you believe that Chakotay could fall back in love with this woman after forgetting her. If that didn’t happen, then the whole thing would be a waste of time. Did they succeed in this? Well, just barely.

In the end, the love story is the meat and potatoes of this episode, and it worked alright. Kellin and Chakotay were not oozing chemistry for each other, it was there, but it didn’t strike me that I was witnessing love at first sight. But they both, as they both pointed out, were damn attractive people, and in the end it was the time they spent together talking that made it happen. Both Beltran and Madsen turned in fine performances, and I for one found it really nice to see the moment of weakness and need in Chakotay’s eyes when he told Kellin, “Don’t go.”

Perhaps a little more insight into this decision would have been nice, but it’s really all there for us to see. Anyone with his burden of responsibilities, who has spent years without someone to love him, may be very susceptible to someone who says she is madly in love with them. He may, for sure want to be in love with her. However…

Although I appreciated that Chakotay was at first suspicious, and how dismayed Kellin was that his attitude was different this time, and although I did believe that Chakotay developed feelings for her, I did so mostly due to the actor’s performances, making it believable. Consider that all their activity in the episode was dealing with her dilemma, and talking about the memories Chakotay lost. Nowhere did we witness Chakotay telling Kellin about himself or his past, or vice versa (save the last two weeks). There really weren’t any activities they did together, besides the business at hand. Unfortunately, although I believed in their feelings, they seemed very transitory and shallow. Perhaps this pairing could have done better with some of the heavy petting we witnessed between Tom and B’Elanna in ‘Scientific Method!’ Some serious and almost palpably physical passion would have removed any question marks about the romance. Like I said, though, the performances (and direction by our favorite plain and simple tailor) made it happen, and so I truly felt for Chakotay when he found that, after her memory wipe, Kellin was not going to once again find her love for him as he did for her.

As far as the final product, Janeway was hardly in it, and any potential for drama between she and Chakotay involving this love was left on the side of the road. That is, really, just as well. Any scene between them would have served as much purpose as Chakotay’s jealousy of Q in “The Q and the Grey,” in other words, as far as the story at hand, none. I think it’s pretty clear to those without a specific agenda that, being in a situation where they cannot explore a relationship together, Janeway and Chakotay have decided on a close, intimate friendship. Now that Mark is out of the picture, some sort of tryst for Janeway is in order to round things out and seal the deal. I think Kim’s attitude for Seven is as much torch-carrying as I want to see among the bridge crew.

Speaking of Kim and Seven, the character dynamics were very nice this episode, as in last week’s, and I’m beginning to truly hope a lot of things have gelled. For once, Seven got to sit into the passenger seat for a while, but I think her confusion was a nice angle to examine. Kim’s attraction to Seven has hit a nice middle ground, and I think the scene they had spoke nicely of why the relationship is what it is. I think it should stay this way for a while. Also nice was Tuvok and Chakotay’s scene. A logical mind does not preclude a sense of humor, and I happen to like Tuvok’s. Good to see more things like this that differentiate him from the Vulcans we have seen before. Also especially refreshing was a clear use of Neelix, almost like a Guinan with a more real-world feel. Phillip’s use of Neelix baing careful and respectful around the topic was refreshing, and is a nice angle of growth for the character (also nice to see Neelix has a broad variety of Terran foods now, he has, apparently, adapted). I found his final speech a nice end for the episode, which might have only been improved if he could have related that he understood personally, in that he had no idea why he and Kes fell in love, or why she fell out of love with him. But his wisdom was still sound, and summed up the theme of the episode nicely.

The trappings and macguffins of the episode, however, were particularly convoluted. I wondered to myself why the original stowaway didn’t just ask for asylum once exposed. Perhaps it would have been nicer if she had brought him back with her, having never turned him in after deciding to run herself. She seemed, and Chakotay seemed, to have no problem seeking the same refuge they had both denied the previous runaway, and this was exceedingly troubling. Furthermore, without any debate as to whether or not to ‘enforce’ her asylum after her memory wipe, and with the ship willingly exposing itself to a virus to wipe it’s memory of the species, one wonders why letting these people go is the right thing to do, and taking an unwilling 7 of 9 away from the Borg is also the right thing to do. Of course, as I said, these are a function of limited time, and I think for the love story to work, it did need all the time it was given.

What was less forgivable was the MacGuffin regarding wiped memory, including the pheromones and the imperviousness to scanners and such. At least they didn’t dive into techno babble to explain it, but my feeling was they made it a natural ability of the species to avoid accusation of copying TNG’s “Clues.” Personally, I would have rather had the less original but more believable explanation of specific and intentional memory wipe, as witnessed in that TNG episode. They may as well have called it ‘magic’ and left it at that.

A believable if not always romantic love story, which poses a very good question about the nature of love. Ignore the science and you’ll feel better about it. Pressed for time, as most romance in one episode shows are, the episode wisely chose to focus on the core of the story, but a lack of a feeling of true connection with one of Voyager’s most introspective members of the bridge crew kept this one from being truly inspired, or inspiring, in any way. It was, in effect, a love story played out in terms of ideas, rather than in terms of emotions.