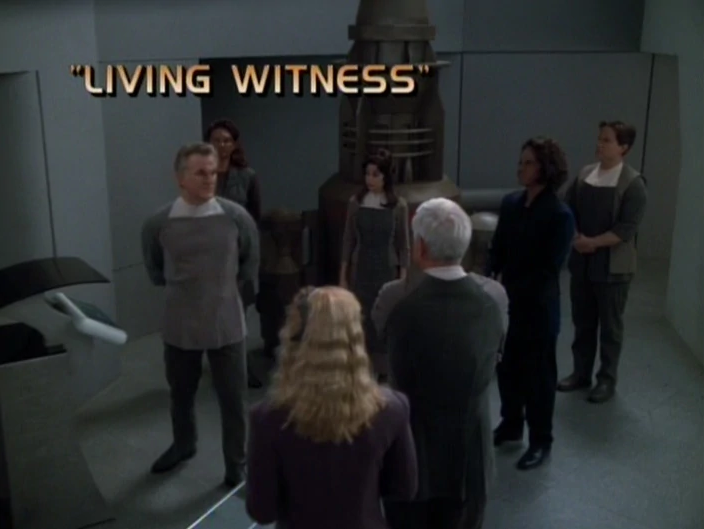 – Three and a Half Badges – “A real museum piece with both “evil Voyager” and something meaningful to say.”

2020 UPDATE – I’ve rewatched Voyager at least three or four times in the last twenty-two years and I still remember nothing about this episode except Virginia Madsen guest starred.

Voyager continues to find unique subjects to tackle within the framework of the Star trek metaphorical world. This treatment of revisionist history is far more successful than the examination of recovered memories from “Retrospect.” Despite a lack of innovation in makeup or appearance, and no new twists ala language in “Nemesis,” the alien culture in this episode is remarkably compelling, once it is revealed. I believe it was a wise choice to keep things vague enough so that the metaphor for these two people’s racial conflict did not be refer to a specific example in our culture. By not doing so, the story kept to the issue at hand–how important it is for the truth to come out for a healing between two peoples can begin.

But before these issues came to the forefront, we were treated to a rollick of a good/bad time with the recreation of the evil ‘warship Voyager.’ The fun to be had here made me regret the liberties that Deep Space Nine has taken with the alternate universe in eliminating an evil Federation. Mulgrew’s performance, in particular, stood out as exceptional. Evil Janeway’s differences were subtle, yet the way she slinked around the bridge like a cat, purring pure venom, almost had me squealing with delight. Every Captain before her had a chance to portray their evil side early on in the series (“The Enemy Within,” “Lonely Among Us” “Allegiance,” “Dramatis Personae”), and you could tell she wasn’t going to waste this opportunity. Neither, it seemed was everyone else, as evil Chakotay, evil Tuvok, and the evil android Doctor all had standout moments. The complement of Borg drones serving Janeway was particularly inspired. Only evil Kim was hard to swallow, but seeing him brutalize the prisoner sufficiently compensated. And although there is some question as to the plot twist of these people being able to recreate so many details and yet get so many facts wrong, I agree that, if even for sheer fun factor, all the details were present in this completely incorrect reenactment.

When we step out of the reenactment, the nature of the episode changes somewhat, to a more serious and thoughtful tone. However, the central message of the episode took center stage quite deftly, and, despite the shift in tone, everything flowed smoothly, especially after witnessing the ending. The effects of the Doctor’s protests of the accuracy of the program, and the ripples of effect that has in the culture were involving. His protests that he be shut down and the truth be suppressed fall directly in line with his desire to save life, as does the insistence by the curator that the truth is important. It is a lesson we witnessed him learning, and a testament to how cleanly plotted the story was despite its abundance of elements. At the end, a third shift spins the whole episode into an involving tapestry, after the revelation of the falseness of the exhibit and the resulting conflict is itself revealed to be an exhibit displaying the crucial moment when the truth came out, and peace began between the two warring peoples. Inspired.

The Doctor gives an inspired performance, as usual, and I particularly liked the small moments when he wondered about his ship and his crew, having moved on so long ago. Surprisingly, among this already bountiful episode, this character arc of this alternate Doctor is introduced and satisfyingly explored. The idea of this backup copy of the Doctor becoming a sort of hero to these people before eventually leaving to learn what happened to his crew was surprisingly moving, even if it was one of the smallest elements of the plot.

I suppose I should take some points off for some technical slipups regarding the crew’s ability to backup the Doctor, and the museum’s ability to so accurately portray the Voyager crew, but I’m not going to take off much. This was one of my favorites.

This stand alone episode for Voyager turned out to be a standout as well, boasting an intelligent treatment of a relevant subject, a clever and compelling narrative, and the most entertaining ‘evil’ Starfleet crew since “Mirror, Mirror.” Multiple plot points come together well towards the main message, and the entire thing is thoroughly enjoyable, despite some technical questions.