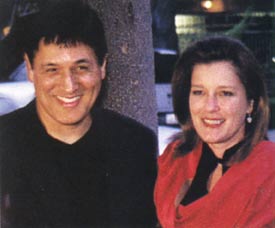 2021 Update – So many of the old Star Trek fan sites from the late 90’s and early 00’s during the last heyday of televised Star Trek are extinct now, and unfortunately, so is much of their content is lost. You can still find vestiges and remains, of course. Thanks to services like the Wayback Machine, past insider content like the Ron D. Moore interviews on the AOL Message Boards are still accessible at this link.

The interview below from defunct site Entertainment News Daily (archive.org link here) with Robert Beltran was posted to Trekweb where I left a pointed reply I’m certain Robert Beltran probably didn’t read. Probably for the best, I was kind of mean to him! You can also find an article referencing this interview on a TrekToday page which is still up!

Ian Spelling’s Inside Trek column just posted an exclusive interview with Robert Beltran, in which the Voyager actor once again critizes the series’s writing and the under-development of his character.

“I just felt let down, ignored and insulted” Beltran told the journalist “I think they did a grave disservice to what I thought could have been an interesting character.”

“I’m just sorry that it has gotten to the point where I’m feeling so unexcited, that I got to be so disillusioned with it” Beltran continues “I’m sorry that happened. I’m sorry the writers didn’t see the possibilities. I’m sorry for all the missed chances, not only for my character, but for the whole ‘Voyager’ story.”

“I just feel like it’s been a disappointment” he says “That is the hardest thing to talk about.”

Robert Beltran is one unhappy camper, and has been for years.

“Chakotay has not changed enough for my taste,” the outspoken actor says, referring to the character he’s played for seven years on “Star Trek: Voyager.”

Even diehard Trekkers agree: Chakotay, the former Maquis rebel who is a confidante to Capt. Janeway (Kate Mulgrew), was shortchanged when it came to character development and screen time.

“Although they come up with a scene here or there that’s tolerable, I think the character has not progressed since season four,” Beltran says. “In fact, he may even have regressed a little.

“I would have explored his past, his spirituality, the inner conflicts he might have,” the actor says, “and most definitely his relationship, not just with the captain, but with everybody else on the ship. I would have liked more revealing scenes with the other cast members, which were sorely lacking with Chakotay.”

Though his frustration is palpable, Beltran insists that he never let it seep into his performance or his on-set demeanor. The actor gave his all when called upon, and it wasn’t unusual to find him joking with cast and crew on the stage or tossing a football outside, in front of his trailer on the Paramount lot.

“When you’re given these throwaway scenes with not much thought put into who’s saying it and its importance to the whole story – and I’m talking mostly about seasons five and six here – it just makes me feel like the writers don’t care,” Beltran says by telephone from his Los Angeles home. “Therefore the producers don’t care, therefore the show isn’t that important, therefore why am I busting my a– trying to make this stupid scene worth anything?

“I just felt let down, ignored and insulted,” he concludes. “I think they did a grave disservice to what I thought could have been an interesting character.”

Beltran communicated his feelings to the show’s writers, and when nothing changed he went public – very public – with his gripes. Chakotay factored into several subsequent episodes – notably “Repression,” the “Workforce” two-parter and “Human Error,” as well as the upcoming episode “Natural Law” and the series finale, “Endgame” – but Beltran remained dissatisfied. And he makes no apologies for airing his displeasure.

“I don’t mind talking about `Voyager,”’ says the actor, who speaks fondly of friends in the cast and of the loyal fans who’ve supported him and his annual Galaxy Ball charity event, which raises funds to help those who, like Beltran’s brother, are afflicted with Down’s syndrome.

“I’m just sorry that it has gotten to the point where I’m feeling so unexcited, that I got to be so disillusioned with it,” he says. “I’m sorry that happened. I’m sorry the writers didn’t see the possibilities. I’m sorry for all the missed chances, not only for my character, but for the whole `Voyager’ story.

“I just feel like it’s been a disappointment,” he concludes. “That is the hardest thing to talk about.”

Those seven years are behind him now, however, and Beltran can look forward rather than back. Life after “Voyager,” he presumes, will resemble life before “Voyager.”

“That’s when I do my best work,” Beltran concludes, “when I’m totally engaged.”

Well that’s just the smartest thing in the world to do, badmouth your old employers before you have new work. Every series is imperfect and every series is a challenge to get written in a way that pleases most folks. Now let me ask you, if YOU were producing a series, would you want someone on board who made sure to use their public prominence to highlight the problems they perceive? What about actors whose main complaint centers around their wasted on-screen potential–and who insist that blame belongs on the writers, and seems unwilling to reflect on the portrayal choices they could have made that would have sparked the imaginations of the writers and the audience alike.

Worf and Dax’s relationship on DS9 was not a planned thing, it grew from Terry Farrell’s fun and lustful interpretation of one line when she first met him. The personal development work done for the Doctor, the conflicts between Janeway and Seven, Paris’ and Torres’ relationship, Tuvok’s conflicts with the nature of violent emotions–all of these plot threads appeared as something small, and were PICKED UP ON by the writers and expanded because they worked.

So what happened to the Maquis/Starfleet conflict? The Chakotay/Janeway flirtation? The Paris/Chakotay conflict? They fell by the wayside, even though the same writers had started those threads. Now some of that could just be due to the writer’s interests. Or it could be that nothing all that interesting came out of the performances.

J/Cers have the holy bible of ‘Resolutions,’ which was a good performance. But they forget his awkward jealousy in ‘Q and the Grey,’ which I was very happy never to see again. The Chakotay/Paris conflict was great in ‘Caretaker,’ but by the time it reappeared in the Kazon Informant Arc, Beltran was as wooden as oak in the face of what McNeil was playing as a very personally directed rebellion. Nearly every scene in the early season when Chakotay talked down his Maquis crewmates from the anger at ‘starfleet,’ he didn’t seem to me to be portraying any inner conflict at all–heck it was at least in part due to Beltran’s performance (such a calm, easy transition to taking orders from Janeway) that any semblance of Maquis behavior disappeared completely.

Yeah and I’ll bet Robert made sure to take in every TNG or DS9 episode having to do with the Maquis, to better inform his performance. He had all that extra time not suggesting any character ideas or caring if he had any other skills like directing in case that acting thing didn’t work out.

Robert Beltran has been in some of the best scenes of the show, the arguments with Janeway in ‘Scorpion’ or in ‘Equinox.’ He has definite ability when given overt, direct dramatic material. There were times in the series when I got more goosebumps when he yelled out ‘fire’ commanding the bridge than when his captain did. There are a lot of things I like about his character and performance. But the reason Spock, as a first officer, became a primary focus of the original series and movies, was that his charcetr, not just the written one but the one that arose OUT OF the words THROUGH the performance, was ‘fascinating.’

Beltran and Chakotay not so much so. That Beltran wants to blame everyone but himself for that says something I think. Methinks the actor doth protest too much!