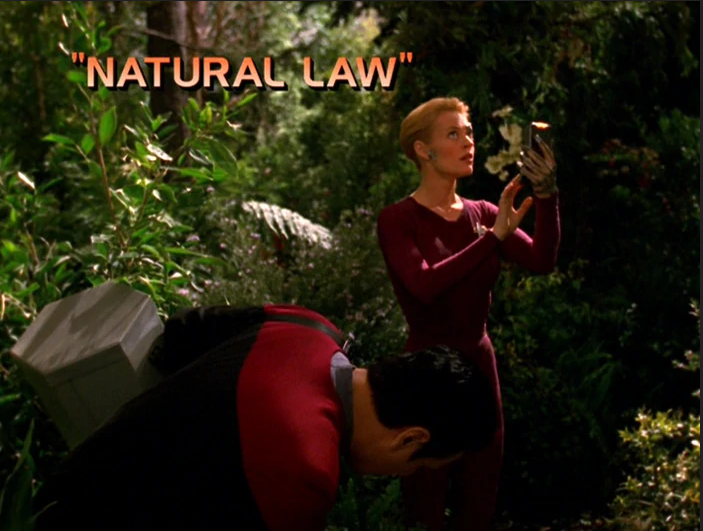 – Two Badges out of Four – “A tired, uninspired, Season-7-TNG-style episode makes an unwelcome appearance in an otherwise excellent season.”

NATURAL LAW Avoids Producing a “Bad Story By Producing No Story At All”–And That’s Not The Worst of It!

Summary: Another day, another shuttlecraft. Half the Voyager special effects budget is blown on one of the worst episodes of the season.

The poet has said, “The saddest words of tongue or pen are these: ‘It might have been’.” On Voyager the saddest words are, “What was the point of making this episode in the first place?” And all too often when this question is asked, there is no answer except another bad episode from a show that already has far too many bad episodes to begin with.

The first half of Natural Law has all the dramatic and intellectual excitement of a half hour of static and noise. For those few fans hoping for a romance between Chakotay and 7 of 9, the opening classic fanfic hurt/comfort scenario might have suggested some possibilities but as awful as that possibility might have been, it’s better than what we actually got; which was nothing. Or technically speaking, worse than nothing. There are plenty of FX dollars which might have been put to better use on “Void”, but were expended on a B-story that has Paris going to alien driver’s ed. One could ask why we need this storyline. One could also ask why we need the Ebola virus. It accomplishes nothing useful except for a weak attempt at humor whose payoff only comes in the final few minutes of this episode. After “Author, Author” had tried to make such a point of how Paris had matured since we first met him, this storyline makes a strong case for Paris being the same developmentally disabled adolescent he always was. The instructor may not be particularly flexible but instead of approaching the problem in a mature manner, Paris tried to lie to, wheedle and manipulate the instructor thereby proving the instructor’s worst notions about him to be true.

You have to wonder if there isn’t any character, any story on Voyager that needed to be told more than this one. I could think of half a dozen and so could most fans, especially considering that we’re a few episodes away from the finale which means this is all the character development we’re going to get. In light of this and in light of the fact that Paris has been on a solid fatherhood character development path for a while now, what was the point?

But as bad as the “Paris goes to driver’s ed” storyline may be, the first half hour of the “Seven of Nine learns the value of other cultures” story is even worse. Here, the writers attempt to avoid the possibility of having a bad story, by having no story at all. Instead Chakotay hurts his leg, Seven of Nine breaks a heel and loses her tricorder (why is she wandering around a forest in high heels anyway?) and they discover some friendly natives. Why are the natives so friendly and ready to give our characters the shirts off their backs, literally?

Well, there are no explanations given except that for lazy writers this is the cheapest and dirtiest way of shouting how wonderful and special a people the natives are, from the highest tower. As with the Ba’ku in Star Trek Insurrection, we’re supposed to believe that these people have amazing spiritual or cultural values that make them truly amazing. The writers fail to specify what these values are but they seem to involve smiling a lot, using sign language and giving lots of presents. And so of course Chakotay soon trusts the aliens absolutely.

This is a bit odd considering that he doesn’t know anything about their culture, species or whether or not their gestures mean “stay for dinner and we’ll cook you a nice meal” or “stay for dinner and we’ll cook you into a nice meal.” As friendly as they appear, leaving yourself at the mercy of a primitive society can be a bad idea, yet none of them actually take any precautions. But then the aliens aren’t real and neither is their culture, they’re two dimensional caricatures intended to make a political point. There’s no complexity or contradictions here. It’s not a primitive culture, it’s a primitive culture theme park courtesy of Disney where nothing can actually hurt you.

The barrier was a piece of alien artificial technology. The result was to isolate the natives trapping them in a static, unchanging, primitive society for centuries. After a surface encounter with the native culture, Chakotay and Seven arrogantly assume that they have perfect knowledge of them and can make decisions for them. They praise the wonders of the native lifestyle ignoring the fact that this lifestyle is artificial and imposed by the barrier. And one wonders what the average lifespan is for the natives right now. Undoubtedly, a fraction of Chakotay’s or that of the writers so ready to praise such a lifestyle and so unready to adopt it. It’s almost amusing to see how many simple-living tales come out of Hollywood, a place as synonymous with simple living as the People’s Republic of China is with human rights.

Janeway, then, bizarrely presents the aliens with an ultimatum– ordering them to leave a planet in their own solar system. Of course she expects them to obey, as the Federation would no doubt obey if the Vulcans stopped by Earth and ordered them to leave the American continent. Unsurprisingly, they attack Voyager instead in a very restrained manner, indeed showing far more restrain than Janeway has. She and Chakotay claim to be doing it in the best interest of the natives but beyond a passing glance of their culture and a few words of their language, they know nothing of that culture. The natives themselves don’t get consulted on the subject. Their curiosity, their desire for knowledge and their fascination with Voyager’s technology are dismissed as aberrations that would interfere with their primitive way of life. Yet just about every action of the aliens suggests that they want more, yet is ignored as being counterproductive to maintaining their own primitive way of life; because the Voyager crew of course knows what is better for the natives than the natives know themselves. This is the ultimate arrogance, the ultimate colonialism, as the Voyager crew reduce the natives to children who can’t think or choose or decide for themselves.

Next week: Neelix finally goes to join his own people.

Yeah so it wasn’t that great of an episode. But it’s not like it’s a big black mark on a season of crud. It’s been agreat season, and this episode was just less inspired. Like TNG’s “Emergence,” it had all the elements but didn’t come together to make any meaningful point. We’d had a strong ‘non-interference’ theme episode the week before, after all.

I had of course been hoping for something between Seven and Chakotay as an extension of ‘Human Error’–primarily because I had been strongly hoping to see Seven’s decision at the end of that episode reversed by the close of the series. Alas it did not happen. Now imagine if the shield protected a wilderness reserve, with no humanoid population, a place where Seven could care for a sick Chak and maybe access some of those feelings she chose to bury–yet perhaps a place she and Chak would still strongly feel needed the protection from their unintentionally harmful means of escape.

Timely, considering current plans for the Alaskan Wilderness Reserve. Would have varied the theme from ‘non-interference in culture’ (just done) to ‘environmental issues’ (which hasn’t been dead-on addressed in a while). And it would have taken the focus off of the silent tribe and put it on our characters, who, as Deus mentioned, didn’t get much development of merit in the episode as it was filmed.

I did, however, find the Paris B-story much more entertaining than the A story and appreciated its presence. And the alien tribe guest stars were more compelling to watch than you might expect for characters who don’t speak. But given the surprisingly compelling storyline of ‘Human Error,’ I was sad that they didn’t even let Seven make Chakotay scratch his head even once with a glimmer of unexpected flirtation. Ah well…