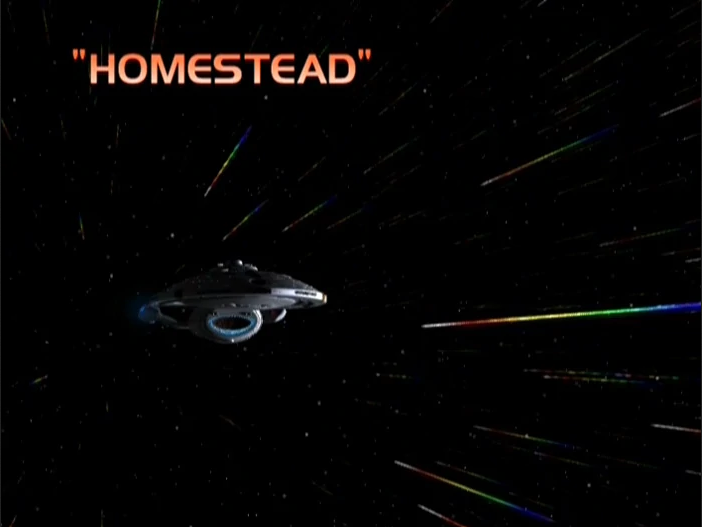 – Three and a Half Badges out of Four – “Neelix gets a fine sendoff with a new family that may be too conveniently found, but is more then earned for the character.”

‘Neelix’ Is Wrapped Up Surprisingly Well In Third-To-Last Episode, HOMESTEAD

Summary: Neelix is inserted into a standard Western of a surrogate father, a family in risk of losing its homestead and a wandering man finding his destiny.

Star Trek has often been tagged with the somewhat inaccurate “Wagon Train to the Stars” label but generally the incidence of Western motifs has dramatically decreased along with Roddenberry’s presence in the franchise. Janeway’s gothic novel holodeck scenario was originally meant to be a Western in order to reflect Voyager’s dilemma, but apparently someone thought Bronte would appeal to the viewers more. So Homestead is one of the stronger reworked Voyager Westerns in some time. “Destiny” was even its original title.

There’s the insular community whose homes are about to be destroyed by the greedy mining company; the woman he’s attracted to and the child who views him as a father figure, which makes this a not particularly unpredictable story but LeVar Burton’s clean and strong visual direction and Ethan Phillips’s heartfelt performance compensated for that. More importantly, this Voyager episode had what few Voyager’s possessed since the early seasons, actual changes to the show resulting as a consequence of the events in the episode. Namely Neelix’s departure.

And the departure is managed far more smoothly and ably than one would expect. Homestead manages to bring the interplay between Neelix and Tuvok as close as possible while bringing Tuvok as close to Spock as he’s ever been. It’s no real coincidence that this episode begins with an invocation of the original first contact (a nice piece of continuity and development) between humans and vulcans. Or that it ends with Tuvok acknowledging the affirmative value of the non-Vulcan and Neelix, Voyager’s Delta Quadrant alien, rejoining his people as a Federation ambassador.

Unlike Kes’s departure, Neelix’s departure is unforced and reasonable. Every single scene from the tour with the aliens pointing out the ambiguous nature of his position on Voyager, his candle-lit dinner with the Talaxian female that causes him to realize how much he’s missed the company of his own people, and finally finding a child for whom he could be an actual father, instead of a babysitter. One could complain that it’s odd that these issues haven’t really been addressed before this, but that’s a general complaint about the show rather than this episode in particular.

The presence of the Talaxians all the way out here is questionable. It took Voyager seven years to make it to this point with several super-human assists. Even assuming that this generation of Talaxians left as children, the Haakonian conquest occurred 15 years from Voyager’s arrival at Talax which means that considering their detours and attempts at colonization, they would have had twenty years to make this trip. Considering that in that time they probably couldn’t have traveled more than 20,000 light years and Kes’s acceleration alone threw Voyager 10,000 LY ahead. Fan estimates placed Voyager as having traveled over 50,000 light years by Season 5 alone. Clearly the Talaxian presence is pretty hard to explain and some sort of explanation for a Delta Quadrant species in the Beta Quadrant should have been made.

For once, a Voyager episode manages to have a species’ xenophobia err on the side of caution, instead of being taken too far as in Friendship One, to the point where the aliens become completely unsympathetic. The Talaxian’s story about the death of her husband is just complex and detailed enough to serve as a nice touch. The details of the Talaxian’s technology is another nice touch, that kind of in-depth look at the technology of a wandering group of starships and an asteroid colony instead of just presenting CGI pictures is another nice departure from ordinary Voyager procedure. It helps make the reality of the colony and Neelix’s task more plausible and effective.

It would have been nice, though, if Neelix had shown more leadership and hadn’t needed to be bailed out at the end by the Delta Flyer. We already know the Voyager crew “can do anything”, this scene was needed to establish Neelix’s capabilities. After all, Voyager won’t be around when he has to deal with the same aliens again. But then Voyager is still saddled with the same paranoia of showing Janeway as being less than perfect at anything. The entire discussion of the Prime Directive is again ridiculous and out of place. The PD applies to pre-warp species. It does not apply to warp civilizations out of their solar systems, otherwise the Federation would be unable to do much of anything. Also the rights of ownership for the asteroid belt were not established.

If the alien miners indeed had a claim on the property, then Voyager might have been wrong to interfere once the aliens agreed to give the Talaxians enough time to evacuate. The Talaxians insist it’s their home but they may just be squatters. Just because someone chooses to live in your backyard, doesn’t mean it’s their property. We have two scenes that highlight the casual brutality of the aliens in question and they’re put in makeup that makes them look like hideous evil monsters but that’s just a lazy way of establishing rights and wrongs. We might as well put them in Dracula masks and have them chant “We are evil” over and over again to prove the same point. This might not have been so much of a problem if Voyager had only limited itself to mediation but once the Delta Flyer participates in the battle it would seem that Janeway has used armed force to take a side and it’s unclear if the side is really right or not.

The special effects look pretty good again demonstrating that if nothing else, Series V will probably have amazing visual effects. Tuvok’s dance step is played in just the right subtle way and so is Janeway’s offer to allow Neelix to leave and rejoin his people disguised as a practical ambassadorship. And we’re not burdened with a pointless B story about Paris forgetting how to tie his shoes or Kim losing his stuffed bunny in a turbo lift. Homestead may not be Voyager’s greatest episode but unlike Natural Law, it does belong as one of the series’ final episodes. Neelix may not be Voyager’s best character, but he needed a sendoff and Homestead is about the best one he could have gotten.

Next week: Another Doctor playing secret agent? Is this an occupational hazard?

This was a great episode and a lot more affecting than I expected. I am particularly satisfied to see Neelix ending up with a family again, after having lost one before in the Metrion cascade outlined in Jetrel,’ and again in another fashion in ‘Mortal Coil.’ I found it a touching conclusion to the primary arc of his character, and also appreciated how Janeway kept him a part of their family even as he left. That final scene between them was very nicely written and performed. Even more so were the scenes between Tuvok and Neelix.

Yeah so things were a little hazy about who actually owns the asteroid. But if any race can just come across an asteroid belt and say “I claim these rocks for Spain,” then I think the higher morality of the question of ownership, at least when it comes to land, is how will the land be used? In terms of Federation involvement, I don’t know if the Prime Directive applies, but certainly there is some sort of non-interference directive when it comes to warp-capable cultures. It has been what has prevented the Federation from picking sides in the Klingon Civil War, for example.

Whatever it’s called, I didn’t mind at all Janeway swooping in with the ‘Han Solo Manuever,’ changing her mind and showing up to help a friend in a fight that isn’t hers. It capped off a nice theme in the entire episode–the Voyager crew helping Neelix to realise what he has really meant to them, and thus to realise his own potential as a leader.

I personally didn’t find that diminished by an assist from the crew whose loyalty he earned, though I did wish there was a clearer sign that these Talaxians would surely win the fight. I followed the invitation in the script, however, to imagine the possibility of Neelix being among a charge of Talaxians retaking Talax one day.

Kind of a long distance charge, though–I too would have appreciated the word ‘wormhole’ or something to help me deal with Talaxians so far from home. It’s been clear for a while that when it comes to this kind of precision I shouldn’t get my hopes up, so I didn’t.

Now the character of Neelix has ended up with what may be the best sendoff any of the characters get, since all the rest are going to have to happen in the final episode. I say good for him. He has taken plenty of abuse from fans over the years, but considering the number of dour characters and dire circumstances Voyager has seen, I have found Ethan Phillips to be a vital part of the mix. I hope he’s somewhere enjoying the breeze on his forehead as we speak. 🙂