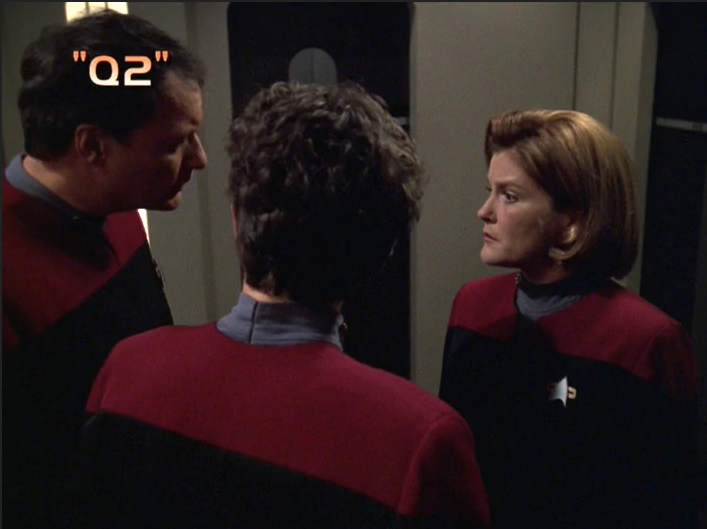 – One and a Half Badges out of Four – “Don’t cover the same ground as before if you’re not going to go deeper.”

‘Voyager’ Begins Home Stretch With One Last Appearance of ‘Q’ — But Is Q2 Made of the Right Q-ness?

Summary: Q2 indulges in Deja Q, revisiting a far superior TNG episode with a weak and clumsy imitation centered around a character with none of Q’s charisma.

The first problem with Q2 is that essentially it delivers exactly what its title suggests it does, an episode not about Q but about a second Q. The problem of course is that the second Q isn’t all that interesting of a character. Q works mostly because of de Lancie’s charisma and over the top personality that allows him to dominate a scene with a single look. This allows for the kind of over-the-top material and dialogue that make the Q episodes entertaining to begin with. Corbin Bernsen as Q wasn’t quite his equal but had a certain amount of presence and so did the actress who formerly played K’helyar returning as Worf’s mate. The actor playing Q2 on the other hand is competent enough but completely uninteresting in that sort of way.

Q2 (the episode) revisits Deja Q, the far superior TNG episode that featured Q stripped of his powers by the Continuum for abusing them and left in a human shell to function on a Stafleet vessel and then prove his worth by offering to sacrifice his life to save his human pals at which point his powers are restored. Sound familiar? Well it’s essentially a workable synopsis of Q2. Without even addressing the lack of originality behind the episode (bemoaning the lack of originality behind recent franchise material is as useful and as commomplace as complaining about the weather, those with sharp eyes will note that DS9’s entire Pagh Wraith arc sprang from a single TNG episode just recently rerun), Q2 fails simply because once again Voyager tries to redo a TNG episode without understanding the facts that made that episode work.

By the point of Deja Q, Q was a malign, greedy, childish God. He was all those things but he was also superior and omnipotent in more than just powers. Q Who demonstrated that he had something to teach humanity and so did TNG’s own finale, All Good Things… In other words, he was a true antagonist to the TNG crew and to Picard. He was also dangerous. Rather than the benign wish-granting, amusing genie he later became, Q was quite capable of killing the crew. He genuinely disliked and felt contempt for humanity. This made his transformation into human form all the more dangerous and his sacrifice meaningful. The chilling scene that features Guinan stabbing Q with a fork to prove his humanity is genuinely disturbing. The only thing Q2 has to offer is Q2 removing Neelix’s vocal cords (an action most people agree with anyway) and all is quickly forgotten and forgiven. And that’s the trouble with Q2; Q2 far too quickly becomes a model human and Starfleet officer.

With Q having been thoroughly contaminated by TNG and Voyager episodes that have weakened and diluted him as thoroughly as the dreadnought Borg he introduced, introducing Q2 as a new Q with all the edge and darkness the original Q had lost was not a bad idea but instead the new Q is an even weaker model than the old. But this was only to be expected. Voyager has focused its Q episodes on having Q come to Janeway and have her help him with Q problems. Where Picard and Q struggled over human issues, Voyager was too insecure to allow Q to challenge Janeway in that manner and so Q quickly ran for help to her every time there were problems in the Continium. So of course it’s not likely Voyager would allow the new Q to challenge Janeway, anymore than the old Q could.

And so stripped of any edgy or challenging material, Voyager’s version of Deja Q quite literally becomes a babysitting episode with Q2 learning to be a better person thanks to the Voyager crew. His transformation is pretty meaningless since he never had the darkness of Q. He’s just a kid and Q’s description of him is apt, he means well and you just have to get to know him. This is ultimately quite true but it also gurantees that the episode will lack any dramatic or comedic value. Furthermore, where original TNG episodes like Deja Q were laser-guided and focused on what they wanted to achieve, Q2 stumbles as if it’s not quite clear on what it wants to accomplish or how it wants to get there. Voyager’s writers believe the Q are funny and popular but as with so much else of the ST franchise, they don’t quite understand why and so they go to the equivalent of having the Q doing juggling tricks. They try one thing and then another and throughout it all they have the distinct feeling that something is not right and not working just right. And so the focus is lost and the result is yet another poorly thought out episode. The writers clearly believed that simply having a kiddy Q would be entertaining by its very nature, failing to understand that like the Borg, nothing is entertaining by its very nature. It requires work. It requires understanding the essentials of the original and building on it.

This can also be read as a summation of the reasons for the failure of the Voyager franchise itself.

Next Week: Evil Voyager characters in the HoloDoc’s novel. Now that should be entertaining.

I have to agree that the episode was derivative and didn’t add anything significant to the story arc of the Q. Not only was little Q’s arc the same as big Q’s in ‘Deja Q,’ but the concept of an ‘immature God’ learning the lessons of responsibility for their powers come straight from ‘The Squire of Gothos’ and ‘True Q’ as well. Perhaps things would have been more interesting if, rather than robbing little Q of his powers, he’d granted Q powers to Janeway to help her babysit, forcing her to learn the responsibility as well. As it was, for a long time Trek viewer, it simply wasn’t original enough for me not to be able to predict every plot point from miles away.

I have to disagree, however, on your assessment of Keegan De Lancie’s performance. He showed wit and talent and ability to carry the focus, and yet portrayed a real vulnerability that his father’s performance in ‘Deja Q’ wasn’t as successful at portraying.

If I’d never seen ‘Deja Q’ or ‘True Q,’ I’d have been a lot more compelled. I too found myself wondering how Starfleet behavior was going to help the Q continuum with their problems, and sadly feel that that story potential of the Q, as introduced in “Death Wish,” which was a very serious episode about a serious subject, didn’t get the considered follow-up it deserved.