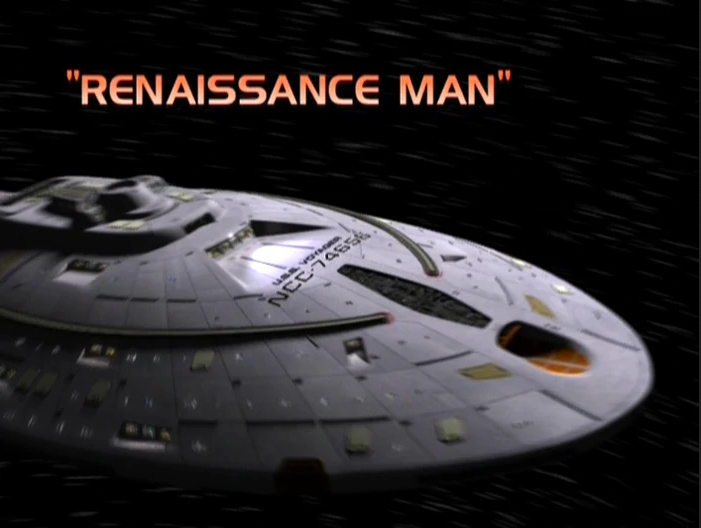 – Four Badges out of Four – “Holodoc finally gets the nerve to confront the crew directly so we can have fun watching him come out on top.”

Summary: A “perfectly functional” episode that pretty much ties up the Doctor’s development and offers a somewhat decent adventure plot to boot. And it’s always fun to see the Doctor take Tuvok down a notch or two. Renaissance Man isn’t a particularly inspiring episode but it is, as a Vulcan might say, “perfectly adequate.” It doesn’t remotely measure up to the wild brillance of Tinker Tailor, the episode it serves as a sequel to. But it does put the Doctor’s character under real pressure and creates genuine tension and conflict, something very few of the season’s adventure stories have managed so far.

Like Tinker Tailor, Renaissance Man’s villains are once again the Hierarchy race. And they use their ability to see what the Doctor sees to keep him under control. There is also the tension between the supervisor character and a more imaginatively-minded and kinder subordinate. But the episode, by attempting to recreate Tinker Tailor, misses the things that made that episode work. Where the office drone dynamic of Tinker Tailor provided a character we could relate to and linked him to the Doctor’s own troubles, Renaissance Man employs the aliens as stock characters: “bad alien” and “decent but spineless sidekick”. It’s been done more times than can be counted and Renaissance Man, unlike Tinker Tailor, brings nothing new to the table.

Indeed, the only reason for this stock relationship is to lead up to the predictable ending where the spineless alien will finally turn on his master. Worse, it’s the only reason the aliens are turned into renegades disconnected from the hierarchy. This makes the entire thing look ridiculous since basically Janeway is being held hostage by two fat guys, only one of whom is even any kind of threat. You don’t see Kirk or Picard or Sisko remaining imprisoned for long under these circumstances. But they seem to manage to produce complete chaos on Voyager. This is more than a little reminscent of Janeway’s embarassing struggle with two Ferengi.

On the Voyager end, though, the Doctor outwitting and even physically defeating most of the Voyager crew is certainly entertaining. The ECH once again makes a case for his abilities as he outwits Tuvok and then defeats him in hand to hand combat. He poses as three different officers, fends off Paris’s romantic overtures and knocks out Chakotay and Kim and stows them in the overhead compartment. He takes over and runs Voyager and watching him do it is fun, even if his complete capitulation to the kidnapper’s demands is a little odd. He may be fearful for Janeway’s safety but the ECH’s tactical scenarios should have told him that the best way to assaure a hostage’s safety doesn’t rest in complete compliance with a kidnapper’s demands. The constant monitoring is an important tool for reinforcing the plausibility of his actions but it’s not quite enough.

Indeed, much of this episode seems to be setting up material for the series finale. That may be appropriate as Renaissance Man is the last episode before the finale but it seems weak and misplaced because the Doctor’s behavior and Janeway’s attitudes both seem a little odd. This is why arcs help set up changes in character behavior, instead of sudden changes occuring in the context of an episode. But it does serve to cap off the Doctor’s character development.

The EMH proclaims that he’s happy to be a hologram and doesn’t want to be human. He confesses his love for Seven and begins developing a friendship with Janeway. He demonstrates his ability to do just about anything and even gets to sing again. And considering that the reality is that the Doctor was always Voyager’s breakout character, far more so than Seven of Nine, and its main character as well, it’s only appropriate that he be assigned the next to last Voyager episode. Voyager’s Renaissance Man.

Next week: Voyager’s series finale. Hey, it made Mulgrew cry.

Well I may be one of the very few internet Trek fans to have this response, but this episode was entirely too much fun for me to watch to go nuts nitpicking. There’s something about pitting the crew against each other once in a while, that really gets a thrill. Note that this is only the case when it’s done sparingly. DS9 crew members at odds with each other was just another day at the office. Data going ‘erratic’ got the blood pumping in “Brothers,” but by the time it happened yet again in “Star Trek: Insurrection,” I found myself wanting to see Data act normal for once. And nobody even blinks anymore when a crewmember steals a shuttle to go take care of some personal issue.

And so “Rennaisance Man” as an episode seems to know its strength, and spend the majority of the episode on the doctor’s efforts efforts to sabotage Voyager and steal its warp core. And I appreciate that he was great at it. Doc vs. Tuvok easily earns classic status for a non ship battle action scene, and it got the imagination and attention it needed to make it a great scene. I thoroughly enjoyed the first two-thirds of this episode.

Then in one of the very next scenes after the Doc has outwitted and escaped the Voyager crew, he falls for the old “lower your shields and I’ll beam you the prisoner.” Hell he’s lucky he’s not a cloud of space dust.

But I forgave the episode for the transgression, because I’m glad they gave me the action treatment of the Doctor’s efforts. Just because his efforts are misguided doesn’t mean they’re not formiddable in execution. And he deserved it, the chance, for once in the entire series, to pit the uniqueness of his holographic nature in contest, and thus in contrast, to the abilities of the crew on a slam-bang action-scene level.

In many ways, this episode, like the ‘deathbed confession’ scene, was packed with more material for the Doctor and Robert Picardo than it could take and stand up straight. And the mix of it is funky. Less comedy and more menace on the part of the Hierarchy aliens would have helped, but a scene where Janeway’s life is more overtly threatened to threaten the Doc for almost asking for help, highlighting how powerless he was with his every move being monitored, may have only belaboured a point I obviously can fill in myself.

What it seems like is that, if this hadn’t been the Doctor’s sendoff, it might have made an all-time classic straight adventure. But in the mix of darker episodes here at the end of Voyager’s run, and before the slam-bang finale–even though the episode as a stand-alone suffered–I appreciated some fun material for the Doctor to send us off with as well.

I hadn’t thought about it that way, but I guess it does tie up the Doctor pretty well. I do hope his last minute “confession” at the end does set up something in the finale, cause it seemed forced. I know the Doc can go into histrionics, but come on! He really thinks B’Lanna and the gang are going to let his matrix distabilize? She told him what they needed to do! So he conveniently pours his heart out about everything? That was stretching it. I hope there is follow up, especially about him telling Seven he loves her, rather than just another throwaway line.

Robert Picardo is one of the best actors in the world though cause he was great to watch in this episode. I agree though that it was stupid to have The Hierarchy as the villains and the way Janeway was captured and they had the Doc over a barrel….not every villain has to be the Jem Hadar or anything, but sheesh, can we get a viable threat for Janeway? Speaking of which, I’m in general disappointed by the last few episodes before the finale. Sure TNG’s last season wasn’t filled with chestnuts either, but that’s cause they were also prepping/doing the movie and were stretched. And DS9 finished so strongly….these last episodes have just affirmed that Voyager lacked focus from almost the beginning and was a waste of what potentially could’ve been a good show.