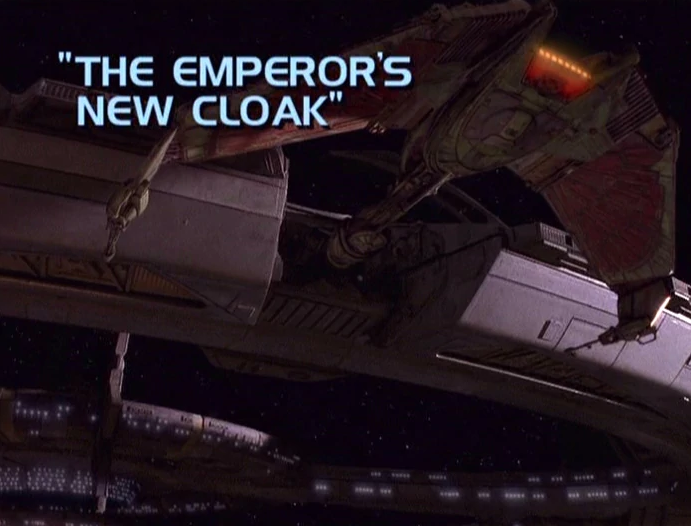 – Two and a Half Badges – “The Nagus pulls our Ferengi heroes into an uninspired send off.”

2020 UPDATE – Twenty-one years later I still feel this one let me down. Like The Next Generation before it, I felt like DS9’s seventh season could be a little too self-congratulatory at times. This episode was one of those times.

Big deal. It under-serviced all elements present. The premise was based on a glaring error in continuity. The mirror universe premise lacked most of the fun from previous installments, and virtually all of the personal impact. No one from our universe takes an active role until Rom’s sabotage is revealed. Anyone WE care about spends the whole episode in the brig! The terror of Bashir and Kira in the clutches of Mirror Kira, the fun of Sisko playing renegade in another universe, the ominous portent of humanity enslaved, the fun of breaking out of your normal role in the universe–all the elements that made the previous ones successful were gone. In a way, it was like watching a holodeck episode where our characters spend the whole time on the sidelines and we are expected to enjoy watching the program play out.

Zek is a plot device in this one, much as in “Prophet Motive,” but he isn’t given anything fun to do. Wallace Shawn somehow turns in a great nod to a fun character in bloodless dialogue. Again, the idea of him going there for profit is a worthy one, and I would have loved to see him acting in that universe, but he spent the whole time in the brig…

And the kiss is neither here nor there. The problem with it is it doesn’t say ANYTHING about bisexuals or gays, other than that they exist in an alternate universe. All it really did was reduce Mirror Kira’s ominous and subtle sexual cannibalism to spectacle. One of the most boring screen kisses in the series, if you look at it objectively. Zek’s hardy-har appreciation for the “interesting” angle of the Mirror Universe sums up the kiss and the hullabaloo around it–juvenile male fantasy having nothing to do with anyone’s actual sexuality. A waste of screen-time.

Mirror Ezri didn’t contrast much with Ezri, and that’s a shame. She was written with attitude, but not with a differing viewpoint, so the end result is she seems not much different in the two Universe’s, except for her circumstances. This in itself is fine, it worked for Mirror O’Brien, but since Mirror Ezri’s dilemma was the central conflict here, it was crippling that I knew very early in the episode that she’d “do the right thing.” It seems that Nicole just can’t help being cute, even with attitude.

Rom was indeed the highlight of the episode, which tells you something in and of itself. The only comic potential utilized had to do with Max Grodenchik’s performance, and nothing to do with the story at hand. The best scene was between Mirror Garak and the ferengi as they toy with him. It was one of the only scenes which set up a nice juxtaposition of the two universe’s elements. One imagines our Garak scoffing at such an obvious distraction. I enjoyed that scene, but it was brief and gone before I knew it. (Not even a good death scene for Mirror Garak–I expected some sort of writhing collapse at least. Did anyone else notice how he got injected, and then BAM! he’s on the floor in the background. And after all that big deal he made about the virus in the hypospray, and how much he DESERVED to die horribly…) Besides those two elements, the entire episode played out like a big dopey Marvel comic.

I still say they should have explored the tension between the way things in the alternate universe played out, and the intentions of Mirror Spock when he set those events in motion. Even without Nimoy, there’s no reason Mirror Spock couldn’t have had a child, who spent his life carrying his father’s regret. This episode reeked of the same odor that many this season have so far–the scent of wasted potential.

With rare, scattered moments of true comedy and numerous missed opportunities to satisfy, this episode didn’t offend so much as it underachieved. Our final visit to the Mirror Universe, as well as our final visit with Nagus Zek, are given short shrift in an episode that has its heart in the right place but ends up simply going through the motions. Although inspiration is in short supply, the episode nonetheless serves up a few chuckles and a complete, if rote, conclusion to DS9’s arc within the Mirror Universe.