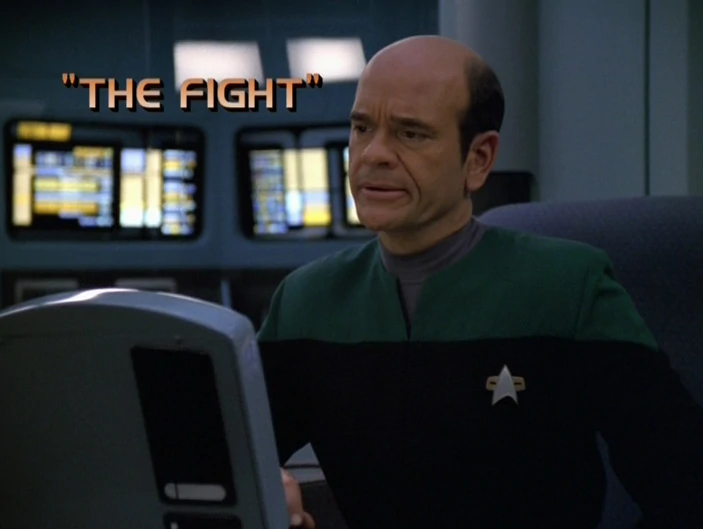 – Two and a Half Badges – “Why won’t they just say that he takes peyote?! Like maybe when he’s on leave? It would make episodes like this so much easier!”

2020 UPDATE – Looks like I had the temerity to act surprised that a Chakotay-focused script didn’t work out. Two decades ago some overseas casino blog copy/pasted this review for some reason, is it full of good words for SEO? Ah well it’s long gone now…

Okay. I have to agree that I liked the concept of the episode, or rather, where it’s heart was in executing it’s concept. Voyager always faces the challenge of executing interesting storytelling that personally engages the characters–in a setting that makes it almost impossible for the characters to have personal investment in what’s going on (beyond the emotional investment in the quest for Earth).

This season, we have to admit we have seen some really stellar efforts in this direction, far more than were attempted previously. “Thirty Days.” “Gravity.” “Extreme Risk.” So, am I gonna freak out when an episode comes along where this process was rougher and less successful, in a season of winners? No.

But I am going to say that this episode had some easily repairable problems. First, the good, though.

It has become a tried and true Trek plot mechanism to have a character need to brave hallucinations or an altered reality in order to ‘save the day.’ That the plot mechanism that chooses Chakotay (this time) for the task is a genetic anomaly that his grandfather had, one that bothered him greatly to witness, is a really good idea for creating personal involvement AND an opportunity to relate some Chakotay backstory. We were due, not only for a Chakotay episode, but for an episode that got into Chakotay a little more, and explained how he ticked. Similarly, Trek has almost always done good with the ‘alien species making contact in a way we don’t expect’ method. I also like the parallels of how Chakotay’s holodeck fight became his fight against the difficulty of this contact for the sake of his crewmates–and the ultimate message, of how a warrior’s fight is, in the end, truly only against himself.

But it was the lack of focus and cohesion among these elements that led to the downfall of this script. The first mistake was with the In Media Res opening, and the casual air with which the scenes shifted from hallucination to holodeck to flashback to present. This episode did indeed seem to suffer from the Chaotic space that Voyager herself was caught in. But, if this was intentional, the overall effect was unspectacular. With so many shifts in location (and reality) the flashbacks to earlier times in the crisis should have been dealt away with entirely, or handled with clear voice over narrative. You automatically fail when your audience loses track of where and when they are (unless, as in TNG’s “Eye of the Beholder,” “Frame of Mind,” and “Ship in a Bottle,” that is exactly your intent). The episode made a valiant effort to unify all these disparate settings into a unified titular theme–“The Fight.” But it did not succeed.

Setting aside the In Media Res opening (which, to be honest, is just starting to get a little old overall this season), this effort to unify disparate conflicts in Chakotay into this central theme also failed because too many conflicts were included for one to be deepened to significant personal impact. The training with Boothby, the conflict with his feelings about his grandfather, the conflict with the Doctor over boxing, the strain of the aliens’ contact–in the end these disparate elements assembled into a rather shallow message about facing one’s fears. There was deeper potential here to say something about Chakotay himself, possibly to say something about the violent side of his nature which led him to join the Maquis and leave Starfleet, or to say something more specific about what terrified him about his grandfather, or even to unify the two. What with all the doctor had to say about boxing causing permanent brain damage, it wouldn’t have been that far of a leap to make the connection that Chakotay could have the specific fear that his own combativeness, the “anger” he told Janeway of in “Resolutions,” would lead to his undoing, as it had previously led to the undoing of his career. Perhaps it could have even been related to give us insight into why Chakotay was so quick to let go of the Starfleet/Maquis conflict when the two crews merged, and why he has supported Janeway so wholeheartedly–he knew that his enemy was not Starfleet in the new situation, but his own anger. That would have connected the revelations about Chakotay in this episode with some of his backstory, and led him to a new discovery about not falling prey to his anger, but trusting it to give him strength.

In the end, the episode’s close is unsatisfactory. The literal representation of the fight had too little personal impact after all the setup (I did like Kid Chaos, though), and the resolution, wherein he stands up to his fears and manages to make contact to get the information that can save the ship, is, by necessity of its setup, off screen, within Chakotay’s head, consisting of algorithms and sensor adjustments whispered by alien voices. It ends up being a sharp and uncomfortable affirmation that, however much personal information was relayed and touched upon, the episode was REALLY about Chakotay having serious difficulty receiving a transmission. So every other facet just sort of petered out, leaving the techno babble plot-mechanism setup alone to coast across the finish line.

A plot more fascinating in its manifestations than in its point or resolution.

Yet, despite the shortcomings of the script (which, in my opinion are only so greatly decried because the story had potential to be Chakotay’s “Meld”), the episode was involving to those who love a mystery, even if the solution to the puzzle was rushed. And Robert Beltran, who still strikes me as the greatest untapped potential on the show, turned in a greatly invested performance, which might have really impacted (like at the end of “Nemesis,” or in the confrontation with Janeway in “Scorpion”), if the script he had been working with knew how to aim its blows before throwing its punches.

Voyager gets stuck in a region of Chaotic Script, in a story that is both shallow and deep, unified and fractured, far-reaching yet short-sighted. Chakotay does not yet get that magic character script he needs (which, IMO as far as backstory, needs to deal with Chakotay the Maquis more than Chakotay the Mystic), but he does get to save the ship all by himself again. In the end, this episode becomes an admonition not to bother to bring up a lot of personal involvement in a character if you haven’t got much to actually say about them.