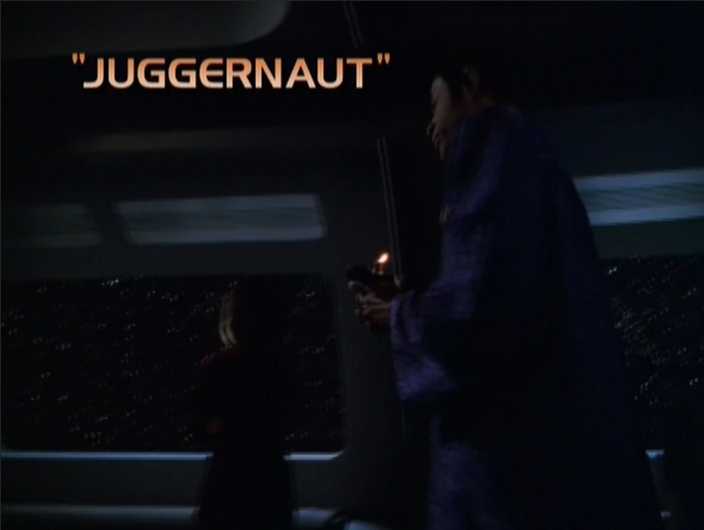 – Three Badges – “Voyager gets the “horror homage” right with a species that should be light years behind them.”

This was the Voyager “horror movie,” the homage to the genre that “Revulsion” tried and failed to be. I’m surprised no one else locked in on this, as it was evident in the crafting of the mood of the episode, and especially in the outstanding and unique score (one of the rare ones to fully deviate from standard Trek score and try to fit the story at hand).

Seems like a lot of the things that made the episode what it is also made it seem like the “odd ball out” in terms of characterization, continuity, etc. Coming on the heels of “The Fight,” Voyager is starting to seem really “out there.” After the predictability of the second year, this is actually a good thing. Especially because, although I love what’s going on with the extended arc over on DS9, there’s not really much to distinguish the last 3 episodes from each other in terms of tone and structure. This episode, like many this season, really had a nice, distinct feel to it. The visuals are, as usual, excellent, and the Malon ship is well designed–the darkness and industrialism of the design, combined with the oppressive (maybe too much so) gas makes for a perfect claustrophobic horror flick setting. And the horror movie template is played to the hilt. Nice to be able to flip over to Voyager and not really know what to expect out of the episode, even if some of the risks they take turn out not to be entirely successful.

The risks taken with characters this season have been both exciting, and jarring. Gotta say that, for me, “Juggernaut” definitely lands in jarring. I was hit with a nice reality in the initial scene between Tuvok and B’Elanna, as was I at the end of the episode, but the emphasis on her anger, and how prominent it was in this episode, gave a strange feeling of lost time. But the doubt Tuvok had about her, and the conversation he had with Janeway, seemed massively out of date–a conversation that should have been had and finished years ago. I can accept that the character work we have seen this year has been both brave and overdue, in many cases addressing character facts that have previously just been left unaddressed (much to my satisfaction), but in this episode they took the portrayal of B’Elanna from static to erratic. The strokes are too bold–there ought to be more subtlety after all these years with this character. This is a flaw this episode shares with “The Fight.”

Another glaringly irritating “reality jump” is the presence of the Malon, which could have been accompanied by a line, a phrase, to help out those of us who do keep track to not get ruffled. My patience has been legendary on this, but I still just can’t understand why, with all the laws of science and the galaxy yours to bend and twist to explain such a far-flung species, someone would choose not to even try. Seems like you’d want to pay attention to how the show comes across to those who watch it regularly. Then again, we’re all MORE than used to this by now, it ain’t new, TNG and TOS did it, and I’ll just keep a dear place for DS9 in my heart for pretending to give a damn. I actually realized the other day that you could probably rearrange the reruns so that the distances and contacts make sense, and virtually no clues within the script would give it away.

Anyway, what’s interesting is the Malon coming across as characters, again true to horror movie template. Every horror movie makes sure you get to know the victims a little, right? I found the further insight into them interesting, although I’m hoping not to spend too much time with the Malon. The revelation of the monster being a core worker, although definitely sending home the horror of what their society has accepted, comes as no surprise. B-movie material, really. In “Revulsion,” when you knew the hologram was the culprit the whole time, there was no final kick. At least “Juggernaut” goes for the classic kick when the core worker says “I’m already dead.” The ensuring struggle, however, is a real let-down. She beats him up with a bar! How come none of the other victims thought of that? It’s fortunate, at this point, to have the B’Elanna character arc to consider, otherwise this story would have deflated quite a bit for me at this point.

But the ending played out nicely, and had something affirming to say about B’Elanna, which, if you think about it, hasn’t happened in a while. It almost makes up for how much her “temper” in this episode is suddenly, for the very first time, a security issue to mention to the captain, or how the stinky, gas-spewing Malon seem to get around nearly as well as the Borg.

Le macabre du joir as Voyager takes a more serious stab at a horror story, and props it up to success with a brave if somewhat misplaced take on our favorite no-longer-lab-coat-wearin’ female Chief Engineer. Successful in terms of mood and flavor, if not story, it’s the spookiest Trek yet (yes, it even beat Catspaw!!! What a feat, eh?!).