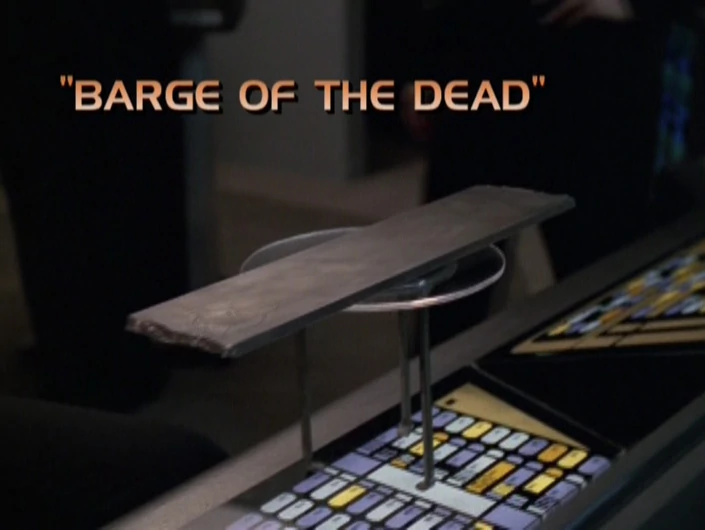 – Three and a Half Badges – “Even death can’t stop the power of a mother’s guilt!”

2020 UPDATE – Twenty-one years later I feel like this episode is the best thing Ron Moore did for Voyager in his brief tenure there, as there had been little effort to ground B’Elanna Torres in all the Klingon culture and backstory that continued so masterfully from TNG to DS9. But none of his creative efforts for the show could offset the damage of his comments about the show after leaving it.

This “anti-Coda” was plagued by rumors and online revelations of controversy. It is apparently the last script Ron D. Moore will write for Voyager, and possibly his last affiliation with Star Trek in general. Many speculated the episode would bite, as it was also rumored to have been sent back for various rewrites and re-shoots. Started by Moore and finished by Bryan Fuller, a regular Voyager staffer, the script was rumored to be a hodgepodge mess, “eviscerated” by the Voyager staffers.

Yeah. And Harlan Ellison will tell you the shot version of “City on the Edge of Forever” is an eviscerated script, and that without the addict and the pusher characters it has no punch.

The final episode turned out very, very well. The characterization was more “familiar” to long-time watchers than was true of “Survival Instinct” last week (I mean, Tom and Harry’s bar fight admonition was a nice skit… for Miles and Julian), the production was well designed and lathered in mood and portent, and what could have easily been a laughable premise was given gravity and power, especially in terms of the characters’ feelings. Easily the best character episode for B’Elanna since 1st seasons “Faces,” it managed to tackle the afterlife question without violating Trek’s basic “well, WE’RE not gonna say for sure that there for sure is one” approach.

Although the Barge was tres creepy and the stark reality of the scenes there were powerful, I liked the very literal manifestation of the Barge and Stekhlar breaking down into a more “No Exit” version of hell. Sure, the metaphysics at the end got real hazy, and although I viewed it as B’Elanna conjuring up her own “mongrel” version of Hell (what with the sickbay and all the familiar faces to taunt her, along with the dramatic lighting and the Battleths), you have to admit that there seemed to be a sudden shift from an “Old Testament vision” to a “New Age vision,” especially in that somewhat awkward series of transitions where B’Elanna’s mother stops acting like a Klingon. It was the one touch that seemed to really lean the perception of what was going on toward “hallucination” more than anything else, obscuring the kind of ambiguity that made “Sacred Ground’s” decide-for-yourself approach so effective, and “Coda’s” accept-our-blueberry muffin approach so off putting.

But it had an added benefit to the story–bringing possible redemption to the story of B’Elanna rescuing her own and her mother’s honor–pulling a happy ending out of a story of damnation because her mother may not be dead. In any case it was a nice approach for bringing us out of heavy Klingon mythology, something that could have held a whole episode about Worf, and back into what this episode really was about–B’Elanna Torres. It is her conflict with her mother and her culture that haunts her, but it is the conflict with herself and with her loved ones that damns her. She has to find her own path. It’s good to know, though, that her mother might still be alive, and she just might finally HAVE someone to look forward to seeing again when they get home.

But the biggest beef with this episode is that, when the line between Stekhlar and her own personal hell (or hallucination) starts to blur, so does the message of the episode. At first, the episode seems to take a similar stand as last week on personal responsibility, and owning up for past evils even if you could not help but commit them, because of who you were. But as B’Elanna’s mother slowly seems not to be a real representation, the message we return to is B’Elanna’s internal conflict, and how she must resolve her resentment of who she is. Well, duh. We’ve known that for years, even if she hasn’t. She leaves the end of the episode with questions rather than decisions. Certainly, this episode does the final job of kicking apart her denial of the issue (much as “Extreme Risk” kicked apart her denial over her feelings about what happened to the Maquis), but it kind of feels like a letdown to have her travel all the way to Klingon Hell and still make her advancements in baby steps.

Still, this is an important step. One of the most significant moments in the episode is when B’Elanna tells the ferryman that she doesn’t believe in the Barge of the Dead, and he tells her that if that were true she wouldn’t be there. Part of her does believe, just as I think part of her wants to be Klingon. Whatever long-term solution and peace she finds, although I did want something more drastic and concrete in terms of what she has learned, I am glad she did not inexplicably go ‘full Klingon,’ as Alexander did on DS9. In the final analysis, B’Elanna’s path, even if it does lead to Klingon hell and back, is indeed unique.

It is too bad Ron Moore didn’t hang around. Even worse is we don’t know anything as to the reasons except for the cosmetic cover story. But if whoever blew it could have kept their cool, it would have been great to have him come up with good, meaty dramas and have the Voyager team ensure that they fit this show, and stay focused on the impact and ramifications on our main characters.

After all, on DS9 you could always put it off until “some other episode.”

Trek again successfully skates the line between religion and metaphysics by blurring the line and keeping the episode focused on the impact on B’Elanna. An unpredictable story and excellent production sell this episode, and make it a thrill to watch, even if the message at the end comes across as somewhat muted. At the end, however, there is no doubt as to the satisfying conclusion of seeing this long-denied conflict dragged out into the lights. For long-time watchers (and especially B’Elanna fans), this episode is a welcome catharsis.