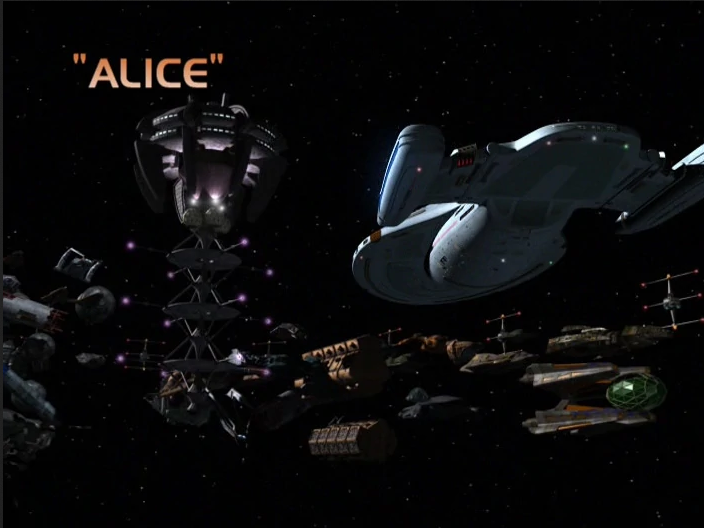 – Two Badges – “Paris plays Bad Boy in an homage to Christine that probably should have happened three season earlier for his character.”

2021 UPDATE – This review was actually only half-written. I took a few moments to finish it up, based on memory and my last rewatch from a couple of years ago. SO contrary to the sentence below, and the publication date of this post, this might be the first time this review is posted. That’s tenacity! 🙂

I’m a fan of both Star Trek: Voyager and Stephen King, so an homage episode modeled after “Christine” sounded like it could have a double payoff for me. But strangely as I recall, I didn’t look forward to this episode as much as I had Tom’s previous renegade flightplan in “Thirty Days.” There were three reasons for this.

Hey, I’ve seen a lot of Stephen King committed to film or videotape over the years. I even witnessed, with a different sort of horror than he intended, his own attempt at adapting a short story of his into movie form, “Maximum Overdrive.” Now let us never speak of it again. For some reason, Stephen King’s works have a tough time retaining whatever it was that made them cool when they are committed to the screen. That was reason one.

Reason two is that Tom didn’t seem the right character for a “Christine” treatment. I mean, he does at first–he’s the grease monkey of Voyager, the most obvious choice for seduction by an alien ship. But I think it’s that very reason that makes “Alice” have to settle for status as a tale of kidnapping and suspense with all the trappings of “Christine,” rather than the tale of psychological collapse that was the true horror of that novel.

Arnie Cunningham, the protagonist of Christine, wasn’t a grease monkey in the first place, after all. When he first found the haunted beat up Plymouth Fury he was a loser through and through. The act of fixing up the car fixed him up, gave him confidence, made him cool, got him a girl–kept him happy and occupied while the transaction for his soul almost went by unnoticed. “Christine” is the story of the Djinn, it is the “Monkey’s Paw”–with a lost youth, misspent running from fights and accepting the ‘trod upon role, replacing the former story’s lost son as the carrot dangled by the forces of evil with an air of being “cool.”

Paris is just the wrong character for this story. He’s already cool, and he doesn’t get any cooler in the episode because of his obsession: he gets weird and isolated. He already has a solid relationship and even a ship he calls his own in the Delta Flyer. This gives the episode a weird air of the threat facing Paris being… turning into Tom Paris.

Third Reason? Harry Kim obviously should have been the focus of this episode. People forget the rival character In Christine: Dennis the football player, with which Arnie felt friendship but also jealousy… only to have the forces of Christine push that envy center stage in Arnie’s mind. Wouldn’t that have been interesting? To play with the fact that poor never-promoted Ensign Kim looks at his good friend Paris and all his advice about the ladies with some resentment? Sure, Kim isn’t a pilot, but doesn’t the neural piloting thing make it so anybody could be a pilot? Any interesting rivalry between Tom and Harry could have been explored here.

Honestly it’s just really too far along in Paris’ development in being comfortable with himself for this story to work for him. It probably would have played a lot better in an earlier season for his character, and so it seems like it would work better for a character who never seemed to entirely find their “cool.”

Ah well. They went with the obvious choice that, since Paris is the “bad boy” he’s the natural fit for any bad boy themed story. As a result it’s kind of paint-by-the-numbers, and any pathos Paris reveals feels forced and artificial at best, and already resolved at worst. Not offensive, but forgettable.

It’s got all the window trappings of a Christine story, but none of the pathos or psychological interest. This makes “Alice” a sort of spooky haunted house dressed up like Christine, with nothing all that interesting at play for any of the characters. And because the main threat is just a ship, the haunted house in not all that spooky. A straight-up Voyager horror story failure.