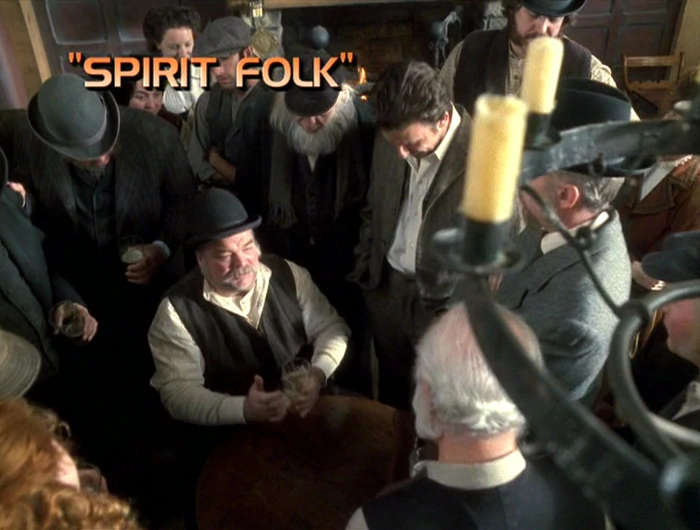 – Two Badges out of Four – “A tale about danger in a holodeck setting that’s totally compelling to the crew and utterly boring to the audience.”

2020 UPDATE – Twenty year later I remember Fair Haven as the weakest of Voyager’s holodeck settings only because I completely forgot about the bikini-beack-bungalo setting for like half a season there. This is, like, the weakest of the episodes that went there, and I was right about Janeway’s offscreen breakup with her holohunk.

Well I dig that the holodeck has gone through a bunch of different scenes, that have reflected themes within the show at times. I don’t mind Fair Haven. Thematically it represents a sort of homesteading feel this year–exemplified in the uncharacteristic additions to the crew, the Equinox survivors, the Borg survivor (who dammit apparantly died offscreen), the Borg children.

It makes a nice contrast. I loved Captain Proton but it was played out after “Bride of Chaotica.” I imagine Fair Haven will take a little longer to play out due to the sensitively handled–but nonetheless weirdly masturbatory–Janeway relationship. Just as long as they don’t fixate and give us something new next year. I’ve come to look forward to the holodeck mileau offering something new.

I liked Sandrines too. That one still had some mileage in it when it was replaced by Bikini Beach. I’ll bet anything that move was pushed by the network. Love Boat launched right about then. The Beach-Resort-Without-an-Ocean got old fast, and reflected a shallowness in general third season.

But for sheer, thank-god-it’s-gone, thoroughly unpleasant and intolerable holodeck “escapism,” nothing beats each and every one of our unpleasant excursions into the wonderful world of Jane Eyre, ala season 1. Ugh. Other than the beach, it was all uphill from there.

I digress. The discussion, however, draws in talk about other holodeck episodes. It has too. Because at this point it’s too hard to notice how some of them are all the same in certain ways. It just gets hard to swallow that there are so many reasons, technical, fantastical, even implausibly emotional, that someone won’t just turn a flipping holodeck off when it threatens crewmembers’ lives. It’s old. It just is. You don’t feel any real threat from it, so why raise the stakes in that way? Just raise them emotionally.

What’s remarkably odd about this episode is how everyone in the town is still painted in the glossy glow of “quaint” even as they become a murderer mob about to burn two crew members and one probably-repairable holodoc to both real and virtual cinders. That Janeway felt confident there was no real threat sits uneasy, and brings up all sorts of questions that don’t need to be there. So we have a lovable lynch mob.

All of that is unnecessary Star Trek Threat®. Not only is there no point to it, but it leaves you with a weird taste at the end, when the townspeople accept the crew as space aliens with jovial glee.

If the focus of the episode was going to be that the crew had feelings about Fair Haven, had relationships with the characters that had come to be important to them now after six years of being pent up with each other, then PLAY that. Why not simply have the Fair Haven characters decide to ostracize our crew? Does that not threaten what is truly at stake, without the contrived damage to safety protocols?

Oh sure, they could wipe character memory of becoming aware of the difference of the Voyager crewmembers. But would that not threaten the relationships as well? To have Janeway have to meet her boyfriend again for the first time for him? Either that or have to tell him the truth? Would it not be more interesting to see a glimpse of some of the long-term effects of this journey on the crew, and how that ties into their reluctance to lose the program? I certainly would find it more interesting than a technobabble rescue of crewmembers in a partly comical and mostly useless state of peril. Then again, that would step into the bounds of the episode “Fair Haven,” which was a much more thoughtful visit.

And funnier, because it was more genuine.

But on the lighter side, the episode had some nice moments of humor. A full half-star is awarded for Tom’s practical joke, and how much he obviously enjoyed it. Paris and Kim have had a more believable dynamic as friends lately. There were some nice serious moments as well. Bonus points for B’Elanna, who was a breath of fresh air–the reasonable and unemotional one in the room, for once, during that discussion. Also it’s nice to see Robert Beltran playing Chakotay’s exascebation at Janeway’s holohunk, whether it’s written for him or not. The character’s history in canon would lead logically to that, and good for him for caring about that.

Janeway’s scenes with Michael lacked a bit of punch, however. It seems all the good stuff was worked out in “Fair Haven,” to my thinking, or at least the stuff that dwelled on the fact that he was a hologram. We’re seeing lots of changes in Michael, but dear Katherine remains distant, to my perception.

I give it six months. Offscreen.

It was a paint by the numbers holodeck episode. A chance to get into period costume and play around. Not very much to think about, with any other peripheral issues of sentience and honesty skirted. More frustrating is the way it skirts the central issue. Some moments and dialogue hit the real center of the episode, but mostly it was a buckshot blast with a lot of scatter, much of it clichéd. Although it has some nice moments, the whole is nothing special. Captain Proton was a better forum for life-threatening comedy.