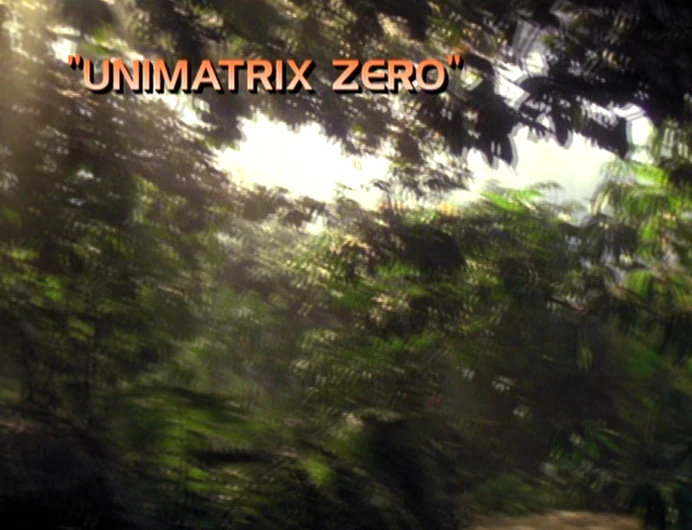 – Three and a Half Badges – (Season Finale) “A fairy tale about Borg skulls and what’s rattling around inside them.”

2020 UPDATE – Twenty year later I feel that Voyager did rely a bit too heavily on the Borg near the end of its run, and it did a lot of things with them. This was one of the better developments to the Borg itself, though the follow-up explanation to “how are they going to get out of this cliffhanger” wound up a bit flat and uninspired to me. Not the worst Star Trek cliffhanger, but also far from the best.

I’m now convinced that Braga has the best handle on the Borg since Maurice Hurley came up with the initial insectoid idea that led to the establishment of the ‘hive mind’ concept. Everything in this episode fit real nice with the Borg as we now know them, given that the purity of their premise has long since been gradually compromised for dramatic purposes (ie. the Borg Queen only gives verbal orders to her drones so that we might have a clue what’s going on).

Still, by simply limiting the amount of time Unimatrix Zero had existed, the explanation for its development, an anomaly in the assimilation of a single drone, could have dovetailed nicely into TNG’s experience with Hugh. However, I like the idea that it was just a glitch that spread from one individual. No matter how many space battles you film, that is always the primary and most important conflict involving the Borg. Voyager has played that theme out nicely in their use of the Borg, and it comes to a nice culmination here. What failed to be accomplished in “I, Borg” was accomplished here, individuality has finally been given a believable to chance to stand against the Collective.

I also found the Borg Queen much more interesting and effective here than in “Dark Frontier,” I think particularly because the script focused on the ruthlessness of her search, and the way that to the Collective each drone is merely a part. A valuable part, a part that will most often be retrieved if it is lost, but a part that will be stripped down to its wires and grey matter if it goes wonky. I did find the severed heads thing went overboard, however, mostly due to a directorial choice to include them in virtually every shot–from the floor head in foreground queen in background, from the wall heads on right queen on left, queen digs into head with fingers, queen impales head on spike, etc… It evoked a nice Gothic vampish quality at first, but I thought it common knowledge that after three times the same trick grows old, and there seemed like at least a dozen shots lingering on those nicely designed but eventually distracting severed heads. I can’t think of an episode with as much viscera since “Conspiracy,” and would be much more careful about the age range that watches it as a result.

Still, Ms. Thompson’s performance is more effective. She is not trying to seduce anyone into the Collective, which was Alice Krige’s strength in First Contact. They played that card again and it didn’t work so well in “Dark Frontier,” mostly because she really never had anything with which to seduce Seven back, or a real good reason to. In “Unimatrix Zero,” the Borg Queen make a lot more sense, and there is a much better reason for Seven to be brought back into the affairs of the Borg.

Like “Dark Frontier,” Seven is the heart of this story, and those who would gripe at that mere fact are missing out. Although it would seem that, not risking assimilation, her individuality would not be at stake, it actually very much is. In this episode we meet Annika, a person Seven didn’t even know existed, a person MIA for two years. We learn Seven has been an individual in the dream world of Unimatrix Zero for many years, has known love, and has forgotten and lost it all. The individual she has formed now, and so many of the internal conflicts that have kept her holding onto to so much of her Borg nature, and her Borg name–and the frightened girl she was when she stopped being human and started being Borg–are now complimented by the inner human, the woman she has been in a fantasy she could not hold onto when she left the Collective. I found this angle much more involving than I expected, greatly in part due to Ms. Ryan’s understated performance–the subtle differences between Seven and Annika. I find myself as eager to see whether or not she will continue to reject this new individual within her as I am to find out how the action story ends.

And the action scenes were blessedly not the push. Certainly the suspense of the story and the final imagery of Janeway, Tuvok, and B’Elanna assimilated had the traditional punch of a cliffhanger, and the episode’s pacing and breezy and cheery casting aside of a lot of serious implications fit that mold as well. But this cliffhanger was far less an action show than was “Equinox.” One might remember the pathos, the deeper plane in that show wasn’t really explored until part 2, and consequently felt rushed. Not so here, the focus seems rightly on decisions and not circumstances, and the heroic capability of this crew came back in full “Scorpion” strength.

Even the battle against the Borg ship at the end (a new design I found most impressive by the way) turned out to be a ruse. I think it was a very smart decision to throw the lines of mystery in there, leaving us wondering not really about the fate of our crew, but about what their plan is and how it might succeed. It kept the assimilation of crew members from being an old hat trick. There are a number of mysteries in this episode that leave me wondering. Of course there is “the plan,” alluded to by Chakotay’s line. There is of course Seven’s choices regarding Annika. And the stakes are high not only our bridge crew, but the fate of the galaxy’s worst-yet menace. I also find myself wondering a lot about the Borg Queen’s line specifically directed to Harry. The presence of such a variety of niggling questions in this cliffhanger reminds me very much of Deep Space Nine’s style of ending their seasons.

The story itself, however, doesn’t win major points for innovation. TV people are always defining things in terms of stories that have come before, but this one definitely is “Matrix” meets “Best of Both Worlds.” And although a lot of mystery was developed with this cliffhanger, very few surprises came about.

What both offsets the drawbacks of this, and strangely compliments the feel of familiarity with the plot, is the character work. This episode was full of threads from the past in a way we don’t see much on Voyager, at least not with this level of “efficiency” and “relevancy.” Tom’s reinstatement and everybody giving him a hard time; the Doctor’s eager misanalysis of Seven dreaming because she wants a man in her life; Tom fretting over B’Elanna by fretting over the Flyer; Janeway’s plea to Chakotay that she couldn’t do this alone like she did in “Scorpion”–it was very appropriate that an episode that focused thematically on individuality seemed to have such a nice handle on the individuality within the Voyager crew.

Because of this, like a Deep Space Nine story, this episode leaves one wondering not about the conclusion to the story, but to the fate of all the characters. So although I hate to say it, even though the story alone offered precious few surprises, somehow this episode as a whole had some hidden up its sleeve.

A tight and thoroughly enjoyable episode that blessedly fits well within the Borg premise and offers interesting future possibilities. Although the story is not innovative or surprising, it wisely doesn’t get lost in its trappings and maintains suspense by keeping us close to some very true feeling character reactions. The cliffhanger leaves some mysteries entirely open ended, and has led to more wondering at the possibilities than I’ve done since we found out Gowron was a changeling. Commendable and an excellent culmination of an excellent season.