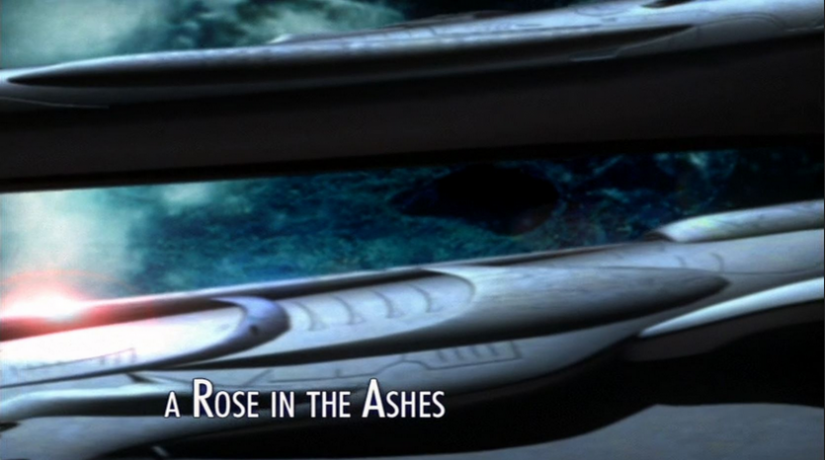 2021 UPDATE – Twenty years ago the Trekweb.com forums used to also host semi-official Andromeda reviews posted by a user who went by ‘O. Deus’  along with Star Trek reviews, that were posted by the site owner Steve Krutzler. I often had contrasting views to this reviewer’s Star Trek reviews, but he and I felt pretty much the same about Andromeda.

Gene Roddenberry’s Andromeda was one of two shows launched and using his name as credit posthumously under the conceit that he had developed their premises before his death. Andromeda was produced for its launched in part by Robert Hewett Wolfe, who had been a writer and producer on Star Trek: Deep Space Nine.

Sadly these few early negative reviews of the series would hold generally true for its quality throughout its entire run.

“A Rose in the Ashes”
Written for TrekWeb by ‘O. Deus’

Summary: Prison planet chic, exploitative costumes and Dylan does nothing for an entire episode. Oh and how to power your very own android using piles of dirt

Rose in the Ashes is a completely forgettable episode that looks like a misplaced Hercules episode and plays like a droning hum in your ear. In fact it’s so forgettable that only a few hours after it aired I’m having trouble remembering the details, let alone finding anything useful to say about it. The women have the expected revealing outfits, there are mean people in pale makeup running the facility and Dylan cultivates a human relationship, which proves that the human spirt can never be entirely suppressed, blah, blah, blah. Besides its striking similarity to a far superior Outer Limits episode about prisoners on a futuristic Earth trapped in a prison from generation to generation by an android who’s breaking down, there’s nothing remotely intriguing or interesting here.

There’s the prison planet, set design courtesy of Star Trek 5 (a bunch of rusted crates, some tents and lots of people in ragged post-apocalyptic clothes) except where even ST5 had a sense of irony by placing those people on a “paradisical planet” that was the supposed result of bringing peace to the galaxy, Andromeda’s tone deaf script lacking even ST5’s sense of self-awareness places them on a mean Planet Hell prison planet. And the people behind this planet believe that crime is genetic, an idea that no one takes seriously even in the tough on crime 20th century, and so it’s stocked with the offspring of prisoners as well.

At this point any attempt in taking Rose seriously as a statement about penal conditions is laughable. Not only is the whole thing a direct to video cliche, not only does Planet Hell look a lot like Oregon and not only is the average American maximum security prison a much tougher place than “Planet Hell”, but shoving the offspring in there and never actually dealing with specific crimes makes the episode just another moralistic slam dunk. The warden is obviously evil, for one thing he’s practically caked in chalk white makeup and he keeps talking about the greater good which is an absolutely certain sign of evil. The prisoners are obviously victims since they’re earnest and the ones we focus on haven’t even committed any actual crimes. The system is obviously evil since it keeps innocent kids in prison, not much to discuss there. The question becomes not, “is this wrong”, “is this justified” or “does this reflect on our society”… but “let’s go blow up some androids.”

Where Voyager’s The Chute really pushed Harry Kim to the limits of survival and sanity, Dylan mainly tours the area, chats up the locals and gets thrown around a little in some clumsy action scenes. He’s never pushed to the limits, if anything he’s bored. There’s no real tension here, no fear, not even the sense of oppression which you’d think would be kind of important to a moralistic lecturer on the penal system. Remember the Paradise Planet from Star Trek V, well this looks a lot like it except with Hercules extras. Andromeda’s android body, like Tom Paris in The Chute, is somewhat threatened by running out of power, but in one of the most awful science blooper scenes in recent memory as she recharges herself using a bucket of high alkali dirt, and again saves the day.

Indeed, breaking down Dylan’s actions in this episode, he meets prisoners and condescendingly lectures them on being better people. He meets more prisoners and condescendingly lectures them on being better people too. For some reason they don’t kill him, probably because they recognize he’s a fool and as such under the special protection of God. Finally his cluelessness gets the “rose” of the title kidnapped by the mean androids who run the prison. He organizes a rescue party for her, and by ‘organize’ I mean he goes back and condescendingly lectures prisoners on being better people. As a result both of those prisoners get themselves killed. The android warden beats up Dylan, Andromeda who has managed to recharge herself no thanks to Dylan then destroys the warden. At this point with no more enemies to fight or rather be beaten up by, Dylan deactivates the planetary defense grid allowing his rescuers to land in the Maru.

Beka then glowingly gives him the credit for saving everyone despite the fact that his basic role in the episode consisted of annoying people with self-righteous speeches and getting beaten up (surprisingly the two were mostly unconnected). The only remaining question is why did anybody in this episode actually need Dylan for anything except condescending lectures and couldn’t Andromeda just have reached into her data banks and repeated the same lectures too?

This is an episode about a prison planet which comes equipped with a defense system protecting the planet and is nicknamed Hell but seems to only have a few dozen prisoners and a handful of guards and its control facility consists of one room which you can get into just by jamming open the door. Despite being nicknamed “Hell” the planet has plenty of trees, bushes and is actually pretty nice, aside from there being nothing to eat. Apparently Andromeda is doing its location shooting in Canada which lacks those all important deserts and as such its “Planet Hell” (an in-joke about the TNG set) looks a whole lot like Washington State. This is an episode about a prison planet where when Dylan & Co. break into the facility, absolutely no guards go to stop them. Finally this is an episode where despite being helpless and clueless, Dylan doesn’t become anybody’s girlfriend, mainly because the prison is dominated by women and big furry aliens.

So what have we learned from this episode? Don’t pick a fight with an android, because you’ll lose every time and if you have to end up on a prison planet, pick one where you can go camping.

The episode tasted so much like Buck Rogers I couldn’t get over it. Merge Tweaky and Dr. Theopolis into Andromeda, using sex appeal, which is in style now, rather than comic relief, which isn’t. Kevin Sorbo seems to be doing his best Gil Gerard imitation here. Flying on autopilot when he needed to provide a galvanizing hope for a prison population that DID seem so nonchalantly starving. Dylan needs to be a lot more obsessive and a lot less flippant for even the premise of the show to be believable. The android here was given about as much thought as the cyborg was in the pilot, a sci-fi cliche reworked to excuse yet another “full grown man thrown through the air” shot.

The “revival of the commonwealth” is still just a phrase a lot of people walk around with. It still carries no meaning, no machination, no weight, no consequence. I agree that what is being treated as miniscule, throwaway references should be given center stage. 50 planets. Commonwealth constitution, the offscreen scene last week when someone was actually convinced to join a political organization to use a neat ship and computer, the offscreen scene before this week when Dylan presented his proposal to the Arasians.

I mean, aren’t we all mad to hear just exactly what Dylan says to try and even broach this crazy idea of his? Much less what he said when someone went along with it?

This episode would have been a thousand times better if the expensive location prison stuff took the last fifteen minbutes of the episode. If Dylan had spent much of the episode in a cheap, dimly lit room with those three hooded Arasian government reps, passionately arguing the benefits, the future possibilities, his offscreen dream of the Commonwealth, I would have been more compelled–in fact, the character of Dylan might be a bit redeemed, understandable, relatable, or at least legitimised. Then, were he to STILL fail, to STILL have to be rescued from that prison, and yet maybe to NOT be able to rescue everyone else–to write that planet up to a mental list of “come back laters” and have to move on leaving the rose where it is–maybe we could have related in some way to his struggle. Instead we relate to the prisoners, who are passionate and not remote and not wearing a Gil Gerard half-bemused grin in the face of “that crazy future,” and Dylan is once again a haughty, moralistic outsider with no real grasp of the situation on hand–and, more importantly, no real resources, infrastructure, defense, support, or help to give anyone who joins his ‘crusade.’

FADE OUT On Andromeda speeding away, secure in the knowledge it has spread hope to another dark corner of the galaxy.

FADE IN On Arasian automated sterilzation ship 3, having detected loss of android caretaker and defense grid on prison planet 135, the ominous ship slides into orbit and begins peppering the surface of the compromised prison slowly and methodically with tactical, high radiation yield Nova bombs…

Who’s to say it didn’t happen? Whose to say anyone’s better of after meeting with Dylan? Why aren’t the people writing these shows concerned at all that the quest that is the show’s focus make some kind of sense at all?

I fear that the progress of the rebirth of the Commonwealth will become like Voyager’s position in the galaxy–something the writers would rather not be nailed down on, that they often disregard, that they’d like to think they can keep flexible. Something that won’t be thought about deeply enough until suspension of belief in the series among its intelligent watchers is already damaged.

Think of the “Dylan as revivalist preacher with no backup” as Andromeda’s equivalent to an endless journey through Kazon space. No one wants it, likes it, or thinks it means much of anything at all, but I bet we can expect a lot more of it before someone realises how much more potential the premise can support.

Andromeda still has potential but if it doesn’t lock on to the meat of the story at hand–the revival of the Commonwealth: how, when, who, and why–very soon it will end up with a mostly vapid season under its belt.

Those things are kind of hard to live down. Ask the Voyager and DS9 producers how hard it is to get credit for good work after churning out vapidity.