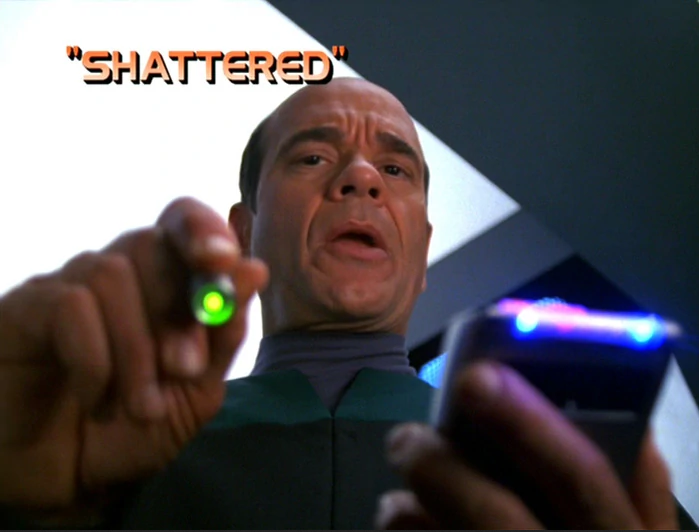 – Three Badges out of Four – “Whether you call it a no-clip clip show or a bottle episode, Shattered is a time-hopping highlight reel of all of the various passengers, invaders, and personalities that have occupied Voyager. Therefore your mileage varies based on whether or not you’ve actually enjoyed the ride we’re revisiting.”

‘Voyager’ Is Back for the Remainder of Its Run; See How “Shattered” Shaped Up

Summary: Lots of Trek favorites return as Chakotay goes on a National Geographic tour into Voyager’s past.

In one sense Shattered is an amazing accomplishment, it’s proof that you can make a clip show episode without using actual clips. As Voyager nears the end of its run, Shattered is an attempt at a self-congratulatory home movie from a show that sees little enough congratulations from the outside. And so we have a mild romp through Voyager’s past, we meet some old favorites, see crucial events in the past as Chakotay struggles to complete a task it seems Harry Kim could pull off without blinking twice. This might not have been a bad idea if the majority of the audience really had a strong emotional attachments to Voyager and its past as might have been the cast with TOS or TNG. But Shattered shares the same problem as the series it commemorates, it has some merits but it doesn’t inspire much emotion or feeling in its audience beyond a raised eyebrow or two. DS9 understood this when it decided to journey into TOS’s past with its Tribbles episode, rather than into its own past. TNG, DS9 and Voyager compensated during their own voyages in All Good Things, The Visitor and Before and After, by linking the journey into the pasts and futures with a personal crisis on the part of a charachter we relate to and an urgent task that must be completed. Shattered though only offers a lackadaisical journey into Voyager’s past, glacially paced and with little real enthusiasm and less sense to the plot than one would find in an episode of Andromeda.

Finding himself in a temporally fractured starship, Chakotay for some reason decides he needs an ally and the best one he can think of is a version of Janeway from a period where they’re enemies and who knows nothing at all about their current state of affairs. He then gives her as much information about the future of Voyager as he can and then halfway through invokes the Temporal Prime Directive. Janeway willingly accompanies a man who kidnapped and attacked her and becomes best friends with him within fifteen minutes, even though she’s the type of person who holds on to grudges forever and never tolerates any abridgement of her authority. The Borg drone version of Seven willingly follows Janeway and Chakotay’s orders without once considering the Borg’s priorities or delivering the demands of the Borg as she did in Scorpion 2.

Virtually everyone behaves in a way completely out of character and even though there’s a new crisis every 5 minutes, none of the crisis feel particularly urgent or critical. It all just seems like a National Geographic expedition. Follow your guide Chakotay as he takes you 3 years into Voyager’s past. Meet the Kazon and Seska. Next follow him into the cargo bay and meet some Borg drones. Don’t worry, they’re friendly drones and really great at parties. Stop by the corridor and get chased by a Macrovirus and then see the Maquis in their leather outfits. It’s cute but only the Captain Proton sequence manages to be funny and only the Seska sequence evokes any tension. Both Martin Rayner and Martha Hackett use their last chanche to return to Voyager as an opportunity to chew as much scenery as possible and so Dr. Chaotica and Seska can’t help making an impression. Dr. Chaotica declaims his speeches in a timbre that makes wannabe Shakesperean actor, Robert Beltran flinch while Seska plays devious, manipulative and ruthless as if she knows she has only 5 minutes of screentime available.

If they had gotten the whole episode themselves or maybe gotten a chanche to unite, pool their talents for evil together (imagine Seksa and Dr. Chaotica together prepearing to fire the Death Ray at Voyager) this episode might have had a focus. But they’re just pit stops on Chakotay’s tour of Voyager, a tour aimed at Janeway and the audience. The clumsy goal of this tour is to show Janeway what wonderfull things await her and to show us what wonderfull things have happened but Shattered never produces a sense of wonder, rather a sense of boredom since most of the things we’re being shown were more interesting in their original episodes. Basics, Scorpion and Caretaker were much better episodes than Shattered and what made them work can’t be contained in a few minutes. And while some of Janeway’s early responses are amusing, she adapts too quickly and too easily to functioning in this environment.

Once she does ponder keeping Voyager in the Alpha Quadrant and is easily talked out of it by Chakotay’s impassioned speech about the wonders of Voyager. His speech though doesn’t make very much sense. Voyager has acquired new crewmembers but Neelix would exist whether or not he joined Voyager’s crew, Naomi would have been born on DS9. Seven and Icheb would have remained with the Borg but was it worth to have Voyager lose dozens of crewmembers including Janeway’s actual first officer and Doctor just so Voyager can have some neat adventures in the Alpha Quadrant? There are plenty of adventures in the Alpha Quadrant too. The Enterprise D has managed to go where no man has gone before without spending 7 years on the other side of the galaxy, Voyager could have too. What exactly is so special about the Delta Quadrant? What has Voyager accomplished here that it could not have accomplished anywhere else?

Shattered has no answer and so Shattered ultimately comes off like a customer who made a bad purchase trying to convince himself what a great deal he got. It tries to praise Voyager but finds that there isn’t that much to praise. And so it limits itself to repeating “Look, see what a great time we had” over and over again in the hopes that somebody will actually believe it. Still Shattered does manage to accomplish one thing, it finally gives Robert Beltran a Chakotay episode and makes it so that episode is about everyone and everything but Chakotay. He must be shattered.

You’ll like this show if you like Voyager. If you don’t like Voyager, odds are you didn’t like “Shattered”. Did ANYONE expect Odeus to feel any of the smiles my wife and I felt at some of the scenes? This one was for the fans, and for me the payoff was nice, encapsulated perfectly in the fun moment when we see Borg Seven clash with Seska. Althoogh he is right that the episode is paced too slowly, Odeus is wrong that, unlike TOS or TNG, Voyager doesn’t have a past anyone would want to reminisce about. That is true for HIM, but in typical egotism he doesn’t bring up the fact that even though HE’s not a fan of the show, that doesn’t mean they don’t EXIST.

Such haughty dismissal of the opinions of the intelligent fans of the show out here is MOST of what I blame for fracturing the Star Trek fan base and dooming it to obscurity for here on out. It’s also the reason why, even though I like Trek, I find most Trek fans (especially online) conceited, obsessive, unpleasant, and inconsiderate.

For my money, “Shattered” was a money saving, non sweeps non event Bottle Show that gave some nice payoff to the loyal fans. And although Mr. Beltran didn’t bust a gut with dramatic effort, I thought Ms. Mulgrew turned in a real nice performance, highlighting very clearly what is different about the Janeway character after her 7 year journey.

For this intelligent, self-possessed, articulate fan of TOS, TNG, DS9, AND Voyager, it was worth the trip.

This page of posts was saved as text from the original Trekweb forums. You can read the original saved text file here and a second one can be found here.