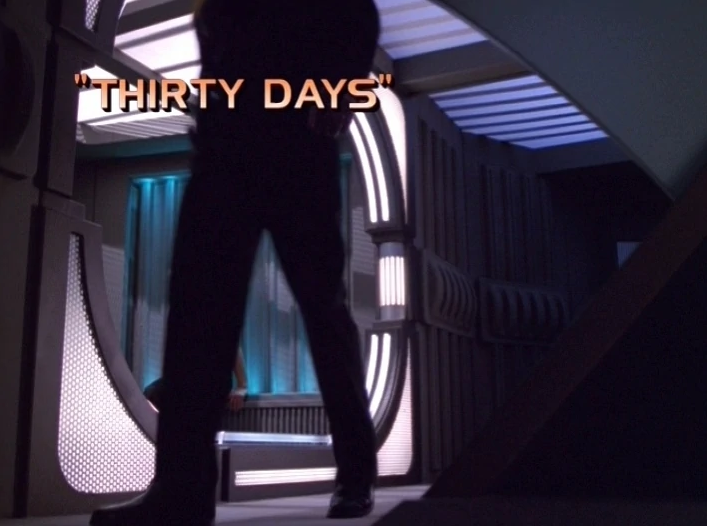 By the way, the “Mike Jonas” spoiler talk refers to an account that posted Star Trek: Voyager full-episode spoilers on the Trekweb boards a week or two before airdate, for a couple of years around the fourth and fifth seasons. I believe he stopped for a bit but resumed through the end of the show IIRC.

Can I call ’em or what? Quoting my review of “Vis a Vis”:

What Paris needs next is an issue that confronts him and forces him to see in what ways he is different from the rest of the crew, and perhaps places him at odds with them. In other words, something that opens him up like this episode, only with much greater stakes. I vote for a Prime Directive issue, as I think he would want to stop suffering even if the Prime Directive prohibited him from doing so (as was suggested in ‘Time and Again,’ 1st season).

What I expected from the spoilers (now that Mr. Jonas is no longer posting full plot spoilers on his site) was a rather shallow adventure episode with awesome effects. Maybe, I thought, they will need something from the planet, and must brave it ala “Demon.” But I suppose the main benefit of having Mike Jonas the Spoiler retire is that I can be pleasantly surprised again, as I was in this episode, which stands, for me, as one of the best in an outstanding season so far.

This episode was about a water planet about as much as “Extreme Risk” was about orbital skydiving. Yet let me first say that the show’s production really has hit a high point in both the conception of compelling locations to explore, and the effects that sell those locations as believable. The planet of water (why didn’t it have a name?) was beautiful to witness, and if an Emmy isn’t forthcoming for the work on this episode, than my assumption is that the work here will be outdone with another episode’s effects later in the year, which will then win. Though it isn’t the prime reason to watch the show, Voyager simply has the best visual production work on television ever anywhere (that I’ve seen).

What a bonus to be wowed visually and emotionally in the same episode. Because this was a story about the heart and mind of Tom Paris, one of my favorite Trek characters, one that unified and made a lot of sense of his development, and yet took him in a ‘maverick’ direction that works so well for the character. The writing this year has shown an intelligent understanding of the whole series, an awareness of what worked in the beginning with the characters, and yet a willingness to accept what they’ve become and connect the dots into a cohesive line.

Everything flowed and made sense, the introduction of his love of the sea, the reminder of his issues with his father, the through line of his relationship with Janeway and how it mirrored his feelings on any Authority, eventually leading him to address the one person he cannot find a resolution with. It was a nice piece of subtle thematic continuity to have him addressing a letter to his father, writing him back, in a sense, for the letter he almost got in “Hunters.” In the end, Paris stumbles upon an important realization about himself and his actions, a change that is very significant.

Some may view it as Paris just being a bad boy again. But we always knew his heart was in the right place. Paris’ rebellion, his crimes of the past, are so damaging to him in that they are REACTIVE. They are a rebellion against something, against the constrictive life his father had laid out for him, against the ideals held by figures of authority, against, in “Vis a Vis,” the constriction of the routine of his duties.

But in “Thirty Days,” an episode set entirely during his imprisonment, what we truly see is a story of Paris freeing himself from a reactive stance to an ACTIVE one. Paris doesn’t rebel this time to run away from something. As he tells Janeway proudly, he rebels for something he believed in. In another set of circumstances, Janeway might have sympathized. But here she has no choice but to pay the role of Authority–it is her duty (and it is refreshing to see her take that duty more seriously than in “Prime Factors,” “Prey,” or “Maneuvers,” due to the seriousness of the ‘crime’). Yet upon his release there is something significant to notice, the crew welcomes him back, and Paris comes back with no sense of shame. It is as if Paris has finally found the voice of his own conscience. That it differs from the rules is no surprise. In fact, although his feelings are nicely set up, there is almost the feeling that the issue isn’t as relevant as the act of following his inner voice is.

And yet, to make this episode a ‘triple threat,’ the issue at stake is a big one, that is socially relevant to our times. The inhabitants of the water planet are unleashing an environmental disaster on their unique world. Voyager has really been the show not to shy away from environmental concerns, jumping waist-deep into issues the other Treks simply dipped their toes in (StIV, “Force of Nature”). To my knowledge DS9 has steered entirely clear of these issues (remember when Sisko poisoned an entire planet?). In some ways, this puts Voyager in the vanguard of a vital function of Trek, sounding the horn on thorny issues others won’t touch.

The two aliens represent two extreme sides of the emerging environmental issue. The leader is among those that will listen to concerns so long as it doesn’t become inconvenient–the lip service of committees that accomplish little–and the stolid unwillingness to accept the inevitable need for change. His second listens and absorbs with grave concerns, and, through frustration at the stoicism of his leader, takes extreme action to promote change. Wisely they are not played in extreme tones, but played as individuals who sit on extreme sides of this new, to their society, issue. Also wisely they are both given positive and negative qualities. I consider the issue treated in a balanced and intelligent manner. And without the second and his sense of alarm, any choice Tom made to affect the issue would have been hard to motivate.

And in classic Trek tradition, the issue is clear. As in many classic Trek moral tales (“Let That Be Your Last Battlefield,” “Symbiosis,” etc), the question is not “who is right on this issue,” it’s “will these people see and do the right thing.” It is rather obvious that it is best not to continue with mining operations that will shortly lead to the destruction of your planet. That is not the moral question confronting the members of our crew. The question they face is “what to do about it?”

That makes part of this episode a Prime Directive issue. And, in one of my only complaints about the episode, the Prime Directive is fuzzy here and given short shrift. Since the species our heroes meets launch themselves into space to intercept Voyager, one can assume friendly relations can occur, including an exchange of knowledge. This is pretty standard Trek policy. And yet this species seems pre-warp and certainly less advanced than our crew. Could some of this knowledge transform their society? Is giving them what they need to save their planet allowable? These are the grey areas the Prime Directive has always been unclear on. Picard might simply interpret the Directive to help them a bit but do what he thinks is “right.” Kirk might bring up that since the planet was artificially constructed, the failure of that equipment is not a “natural development” of that society. Janeway seems to make a good call: we can give them the knowledge to help themselves, but only they can choose to do so. She is the captain, it is her call to make.

Which makes Paris’s actions, if not immoral, definitely illegal. Thwarted from violating the Prime Directive, Paris is still guilty of insubordination and reckless endangerment, and, perhaps more importantly for the character, really pissing Janeway off. In his flashbacks we see some of the friendly mentor relationship he has with Janeway. In the present, we see her crisp anger and harsh discipline, but yet still a mention of her admiration of his principles (no doubt because when she met him, he didn’t even seem to have any principle to speak of).

Yet the other missing element of this episode is how this will affect their relationship. So many other character touches were brief but said so much, his conversation with Torres in the holodeck, and his visit with Kim in the Brig, that the scene with Janeway felt incomplete in a way. His demotion, however, is a clear sign that this will not be forgotten. One hopes to see more resolution of this between them at a later time.

Both of these issues, however, are so minor and forgivable, I’m going to forgive them.

Rich and complex, touching expertly on social issues and his relationships with the crew, this biopic of the character of Tom Paris is rendered with understanding and depth. Woven with issues of duty and conscience, and motivated by a compelling (and visually stunning) foray into what is truly a strange new world, “Thirty Days” unifies multiple elements into a stunningly personal story and a great episode of Trek.