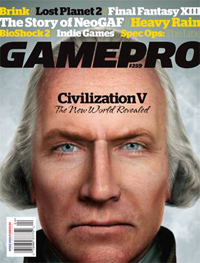 I’ve been following the Games Journalism work of John Davison since those classic 1up.com/EGM days, through his tenure at whattheyplay.com (useful to me as a parent of two kids myself). So it was with excitement that I saw him taking over the reins as editor-in-chief of the new iteration of long-standing gaming magazine Gamepro. Although he has since moved on, my interest in the reformed magazine has not.

I have had a few comments and letters appear in the gamepro.com letter section of the print magazine. In celebration of Earth Day, they published an article on their site contemplating the environmental impact of our favorite hobby. My comment in response was featured in the August 2010 issue:

“I have always been perplexed why game publishers state they are so threatened by the used game business, yet offer no buy-back program of their own to remove the old material from the market. Imagine if Nintendo offered a discount on a virtual console title if you sent them the original cartridge. Microsoft could do the same thing with Games on Demand…”

Following the dismissal of Vince Zampella and Jason West as the heads of Inifinity Ward by their owner/publisher Activision, Gamepro wrote an interesting analysis of the implications for the Call of Duty franchise. Given that I had strong opinions regarding Activision’s insistence that franchises be iterated upon on an annual basis, I had some comments to share that ended up as the June 2010 Letter of the Month:

Activision’s actions towards Call of Duty as both a franchise and thus (seemingly in their eyes) a cash cow to me seems to have less parallel to the Medal of Honor franchise’s handling at EA, and more to do with Activision’s own handling of the Guitar Hero franchise, the Spiderman franchise, and the Tony Hawk franchise.

Activision has already stated that they see no value in an intellectual property that can’t be iterated on an annual basis for profitability. Their insistence on this model has diluted every one of the brands mentioned above to mediocity. Bobby Kotick can publicly blame the developers of Spiderman all he wants, but he has already made clear he’d like development to occur in a joyless sweat-shop atmosphere, and yet still produce the genius that ESTABLISHES BRANDS.

The announcement of an additional COD title in 2011, along with the Infinity Ward planned release, only shows more signs of this short sighted BRAND CANNIBALISM. The brands in question suffer decay under this model even if the original developers remain aboard. Then they take their lumps when Bobby scorches them in public.

That Zampella and West, possibly (conjecture here) got unhappy with Treyarch standing on the shoulders of both their brand and their tools, and “insubordinately” insisted on payment for the most successful gaming product of last year (including both SKU’s, worldwide on a per-SKU, New Super Mario Bros outsold the 360 COD SKU), shows their concern with the long-term life of the brand, and their company. Good, lasting, sustainable business relationships that support successful brands are FAIR relationships.

Whether gamers know this or not, the golden egg alone only yields so much food. That’s the point of the whole parable. Take your pick: the Medal of Honor comparison or the history of Activision’s own franchises–either way, today marks the beginning of the decline of the Call of Duty franchise.

Following up on an interesting editorial essay regarding the role of overt sexuality presented by the character of Bayonetta written by Leigh Alexander, news director at Gamasutra, I penned a hastily-written reply, which I was surprised and honored to have chosen as the print publication’s Letter of the Month for April 2010.

I took several classes on feminism in college, and repression of a female’s right to express her sexuality and her sexual freedom is far-and-away a more prevalent symptom of a male-dominated culture than a more liberated culture.

Look at Muslim societies.  The ones that are the most traditional, the most male-dominated, are the ones that also demand that women cover up almost all of their bodies, heads, and faces with traditional burkas.  The rationale (ostensibly) being that men are tempted into evil by a woman’s open expression of her body, and thus, by extension, that the sexual evil that men do is the direct result of the temptation women’s sexuality presents when set free to be “in your face.”  Rape?  Well if the girl was showing too much skin, it’s her fault, says the dogmatic idea.  This archaic blame of men’s sexual aggression on the presence of women’s open sexual expression is one of the chief “thinly-veiled threats” that has been used for centuries to keep women afraid of the men around them, and thus oppressed in their sense of freedom in self-expression.

Similarly, in our own “forward-thinking” nation, the Salem witch trials demonstrate a similar period where women who broke from stylized and constrictive clothing were suddenly identified as sources of unnamed evil, and subjected to horrible consequences, namely being burned as witches.  A similar example of this double-standard in the same rough time period can be seen in the tale of the Scarlett Letter, where only the adulterous woman in the tale is branded with a visible public sign of her “transgression.”

A society that respects the rights of women allows them to be free in all their expressions, sexual or otherwise.  Now, I’m not sure if Bayonetta had very many female creators involved in the process of bringing this hyper-sexualised character to life, and it’s a worthwhile question to ask, just as it was a worthwhile question when N’Gai Croal asked how many people of African ancestry were involved in the making of Resident Evil 5.
History shows that many of the victims in Salem were identified by other women, if I remember correctly, a cadre of young girls with a set of vendetta against other women in the community.  One could argue, if one were in the mood to stick their neck out, that it is ironically the self-judgment of other angry women that helps confuse the issue and perpetuate the sexual repression that maintains the status quo–just as one could argue that the anger and self-judgment expressed through African American gangster culture helps continue to perpetuate racists fears.  Me, I’m not in the mood to stick my neck out THAT much.  I’d just like to thank Ms. Alexander for dodging such a predictable response.

Because it appears to me that, when it comes to combat as much as sexual self-expression, Bayonetta needs a man just about as much as a fish needs a bicycle.  And I’m glad for the raw, unedited, uncompromising presence of her upon this stodgy scene–so ripe with violence and yet so devoid of anything but the most rough-sketch impressions of sexuality–to stimulate thought and conversation on these topics as much as anything else!