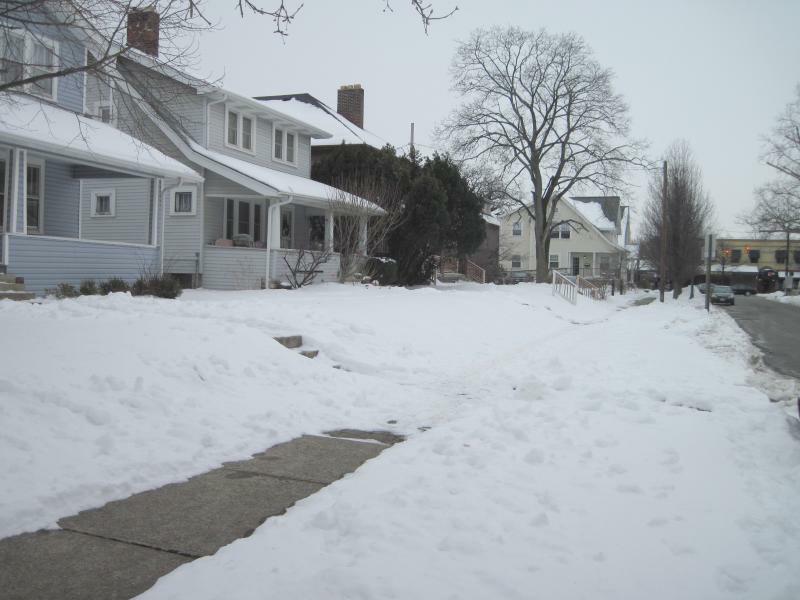 I walk for exercise, briskly, all around the neighborhood, wherever my muse takes me.  I have found paths and tunnels and ways-through-the-field.  I have found the path less taken, and the path most taken, and often found that the better trod one is that way because it is better paved, with fewer potholes and pitfalls.  Yet I often enjoy walking along these residential, suburban streets, here in a non-descript Colorado neighborhood.  Doing so has given me a few things to say to a few people I’ll never meet.  Here goes:

1)  You with the Snow-and-Ice-Covered Sidewalk In Front of Your House:

You know, once upon a time in this country there was such a thing as being “a good citizen.”  When there were elections, you showed up.  When someone got robbed a few feet away, you pitched in.  See a broken-down vehicle with a lady struggling at it?  You should stop and help.

Now, people are afraid of sticking their necks out.  Maybe too many people got shot preventing a mugging, or mugged by that very same lady-in-distress.  Maybe the whole political process makes turning up to vote seem ludicrous.  I can understand these lapses.

But here you are, in a house, with a sidewalk, after a snowstorm.  All your neighbors can see fit to shovel the sidewalk.  On average, two to four houses to the left and right of you have people in them doing the work of “a good citizen,” shoveling that snow.  But not you!  Oh, no!  Your level of importance is too great to be bothered with expending any effort to support your civic duty!  You’re too busy watching someone else do something useful on TV, no doubt.  Or too busy being a big important do-nothing manager of people who don’t spend their mental energy avoiding a little bit of genuine, good-for-you labor.

If I was an asshole, I’d pretend to slip and fall, and launch a lawsuit against you for letting a three inch slab of ice form on your sidewalk all winter.  It’s the law that you take care of this patch of concrete, you know.  See, let me explain the concept to you:  other citizens need that slab of concrete clear, to WALK while safely being on the SIDE of the road.  That’s why they call it a sidewalk, fucker, and not an “iceholder” or whatever the fuck YOU think it should be called.

When I’m walking down a sidewalk, and I walk through the civic-minded efforts of your four-to-six neighbors, just to run across your sloppy patch of self-indulgent laziness, I instantly know who the asshole in this run of homeowners is.  You might be an alcoholic, or an addict, or have some other reason why you’re so dysfunctional that it never occurred to you that, just because all the decent folks around you are clearing the sidewalk, maybe you should too.  I don’t give a fuck.  It’s up to your loved ones to consider your intentions.

To me, considering only the impact of your actions, you’re just an asshole.

2)  You Who is Clearly On Vacation:

You’re a Stupid Asshole.  There’s two ways to do this vacation thing.  You can either:

1)  Have someone come over and pick up all your newspapers and take care of your civic duty in shoveling your sidewalk and driveway, ensuring your “good citizen” work is done while you’re away, while simultaneously keeping your place from becoming temptation for possible crack-heads who need a crash-pad by making it appear something other than abandoned.  Or you can:

2)  Find yourself included under my first category of Asshole, and receive the additional qualifier of also being a Stupid Asshole, because if there’s anything of value in that house you can barely see behind that pile of Denver Posts, you truly deserve to have it all stolen.  ESPECIALLY the things with sentimental value.

I wish I knew some cold, hungry crack-heads RIGHT NOW.  I’d advise them to break in and have the kind of party that involves crapping outside in the bushes and lighting a bonfire inside on the coffee table.

Look.  I know it’s not your fault.  Maybe your owner is part of category #1 or category #2, and all you’ve ever had modeled for you is asshole behavior.  Maybe they went on vacation and left a bowl of food the size of that pile of Denver Posts for you in lieu of, you know, love and affection.  Maybe this is your life, this backyard, all the time, and there’s just nothing else for you to do.  Certainly no one ever put that time and attention into you to train you properly.

But THIS IS NOT YOUR FUCKING SIDEWALK.

Okay?  Just because I’m walking by, OUTSIDE THE FUCKING FENCE, doesn’t mean you have to continually remind me that if that fence weren’t there you would be trying to rip my head off.  Guess what?  That’s what the FUCKING FENCE IS FOR, mutt.  It marks the boundary of the territory where I don’t have to give a shit about you, and YOU DON’T HAVE TO GIVE A SHIT ABOUT ME!

I mean, seriously!  Why did someone go to all the trouble of building a big fucking wooden barrier to mark the edge of your territory if you’re just going to freak out and go apeshit no matter what my location is, as long as you can hear or smell me.  What do you think your territory is?  Earshot?  All spaces upwind of you?

What is required to make you ignore me as “outside the area of concern?”  A fence made of airhorns and skunks?  Fuck!

Hey, I understand drivers are in a hurry these days.  But how about more than two flashes of “Start Walking White Guy” before you flip it on over to “Haul Ass or Die Blinking Orange Hand,” okay?  This fucking road is eight lanes across.  If you can’t stop traffic long enough for me to get across it without beating the foot-speed of Jesse Owens, than build a bridge or a tunnel or something.

It ain’t like, with having to keep an eye out for all the dip-shits turning right who don’t give a fuck what the crosswalk says, we can all start our chicken dash for the other side RIGHT AWAY.  I just want to get to the other side without having to PLAY CHICKEN with all the guys turning right on the other side, who are invariably going to look over to the left in stunned surprise that someone is moving themselves around in some way other than in-a-car.

So, if all of you obstacles could get together and fix up some of these problems, walking around for some exercise might even become something in which fat, ugly Americans could find more interest, or at least less terror.  Kids might take to it more.  The First Lady wouldn’t have to ask video game designers to come up with safe, friendly virtual sidewalks to fill the gaps.  My blood pressure would better match my healthy lifestyle.

The world, in short, would be a better place.  Or at least, this thin concrete strip of it would be.  Okay?