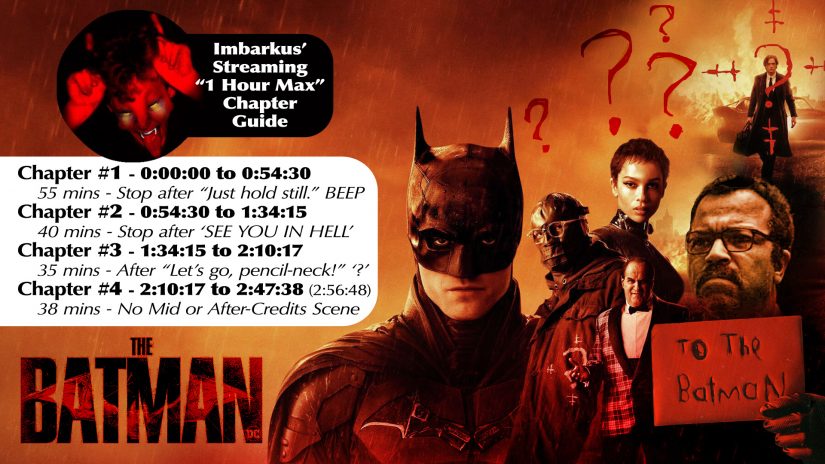 The Man Who Sold the World

Framing this review within the production environment that led to The Batman’s development and placement in the universe of DC comic book adaptations has presented quite a moving target, this time. Last year, this spoiler-free streaming review of The Suicide Squad enjoyed the benefits of a quiet summer on the front of WB/DC news and announcements, a day-and-date release on HBO Max allowing rewatches of the film for free immediately, and another article recently written and published providing the option to shorthand via hotlink the conception background of the film.

This summer the news out of Warner Brothers on its DC filmography has been coming quickly, with new headlines popping daily.

In the time it’s taken to compose these thoughts on The Batman, talk has dropped that Walter Hamada will exit from Warner Bros. following the upcoming release of Black Adam in protest over the cancellation of Batgirl. Zaslov’s intensely-discussed search for a figure like Disney’s Kevin Feige to lead the DC adaptations in a more integrated and planned way seems to be finding a front-runner in Dan Lin as reported by The Hollywood Reporter, echoing and reinforcing the news of Hamada’s now-inevitable exit before the 2023 end of his recently-renewed contract.

Amazingly, the overseeing boss for the entire Justice League fiasco Toby Emmerich, Warner Brothers Studios Chief, completed his contract in the agreed upon year of 2022, like nothing even happened. Hollywood, baby!

Meanwhile, in the past few weeks it was announced that Matt Reeves had signed a multi-year first-look deal with Warner Bros to continue developing his Batman adaptation, securing both the sequel to this film already in script development and the spin-off Penguin series starring Colin Farrell, as well as other projects currently in discussion. In my eyes and in the eyes of WB—seeing the same picture for once—The Batman has answered the question of whether or not it belongs, and has earned its place as a separate universe and franchise right alongside whatever newly-re-rebooted, or magically-revived, or clumsily-redirected, or finally-focused version of the “DCEU” comes out of these new efforts from Zaslav leading Warner Bros Discovery.

If anything, it is the shoddy and uncertain state of the “DCEU” itself that becomes the embarrassment at the party alongside its dark, leather-bound new cousin. Zaslav’s efforts have courted a fair amount of controversy already, as the trades have been buzzing about for any bit of rumor and insider info they can glean for additional headlines. Zaslav’s effort to rescue Warner Bros from an extensive amount of debt acquired both through the studio’s own past efforts and its trip through the hands of AT&T on its way to Discovery have involved layoffs already. One of those laid off has contended that the recent efforts are part of a plan to remove diversity, minority producers, and liberal viewpoints and move product more in a right-wing direction. The truth of this will only be revealed in time, but the rumors only add to WB’s woes in drawing top directing talent. This new WB already finds itself again defending itself against more damage to its reputation as a place to work as a director. It had already demonstrated that your film might be suddenly taken from you and cut into something else by another director. Now a director must also face the possibility that their film will end up disappeared entirely, given only a “funeral screening” for the troupe that bothered to assemble to make it for you.

Newly minted Warner Bros. Pictures chiefs Michael De Luca and Pamela Abdy have been working to ameliorate the situation, possibly by finding a new project for “Batgirl” star Leslie Grace and the film’s directors Bilall Fallah and Adil El Arbi. However, trust with the wider talent community has been broken. Repairing it will take a lot longer than breaking it did.

Variety – From ‘Batgirl’ Fallout to Rebooting ‘Superman’: All the Landmines Facing the Next DC Chief, by Adam B. Vary, Aug 29, 2022

Meanwhile, as this talk was heating up, Ezra Miller issued a statement to Variety apologizing for their behavior and pledging to get help for “complex mental health issues.” One the one hand, of course mental health issues are important, and we’ve already discussed how at least sometimes crime itself can be caused by poorly addressed mental health. And so if this is the case, then of course Ezra Miller deserves some sympathy and distance while they address their issues, and while their apology is considered by those affected. But on the other hand, at the risk of sounding cynical, with hundreds of millions of already-spent dollars at stake on a film designed to be a pivot point for this entire franchise of films, Miller’s release reads like a boilerplate document composed by a PR team when a major studio reminds one’s agent to consider all the money and jobs at stake the next time one wants to escape onto one’s private compound with a newly-recruited acolyte. Hollywood, baby. 😐

Variety also writes in the article quoted above that the studio regrets the March 2022 streaming HBO Max release of the Zack Snyder’s Justice League, because it feels it has entitled rather than mollified the fanbase to continue to push for something the studio has no intention of giving them. Meanwhile the Snyder fanbase—scattered across a wide swath of people and hard to summarize—has largely lost support in areas like the /r/DC_Cinematic community on reddit, though they march on unabated on Twitter and in Public Groups on Facebook. The most committed of them indeed take every development as a sign that success with the effort to #RestoretheSnyderVerse is right around the corner, endlessly reposting as many false reports and sketchy YouTube-only news outlets they have to absorb to get themselves there.

At this point it’s hardly possible to determine what success in the hashtag effort to #RestoretheSnyderVerse would even look like. Zack Snyder himself has long-since moved on to his production deal of releasing movies for Netflix, and hasn’t even been mentioned in the news about Zaslav’s search for a franchise captain currently considering Dan Lin. After all, Henry Cavill isn’t getting any younger. Ben Affleck isn’t getting any younger. Even if they can be coaxed into reprising their roles again, any new efforts in assembling a universe of connected movies will require, like all movies do, the assemblage of the troupe. A crew, a cast, a writer, a director. It’s been more than ten years since this monumental effort was first assembled with the intent of launching a new connected DC universe with the production of Man of Steel, released almost ten years ago as the first in an ongoing series of Superman movies starring Henry Cavill, and quickly repurposed and hamstrung by expectations to play “catch up” with what was going on over at the Marvel Cinematic Universe.

At this point, the biggest obstacle for the “DCEU” to try to replicate the success of the MCU is the inexorable march of time itself. The boss may be new, but the problems remain the same. The “DCEU” as it is has ten films released in the series, not counting (of course) Joker and The Batman. The MCU has twenty-nine.

Time has always been the enemy of DC Films’ success. Time wasted in revisiting the basic decision of what to do. Whatever level of success Zack Snyder’s long-term original Justice League plan would have wrought for DC Films, at least he had a long-term plan.

We know what success looks like with a series of Batman movies. It’s not guaranteed… certainly we have seen plenty of directors in the past fumble the effort (usually on their sophomore outing with the character). But with director Matt Reeves proving to be prescient in setting his Batman series outside the volatile confines of an endlessly-rebooting universe, and producing a Batman movie that actually speaks to the world and the viewpoints of young movie-goers, fans of The Batman can rest assured the adventures of this Caped Crusader can continue exploring daring new ground safely into the future.