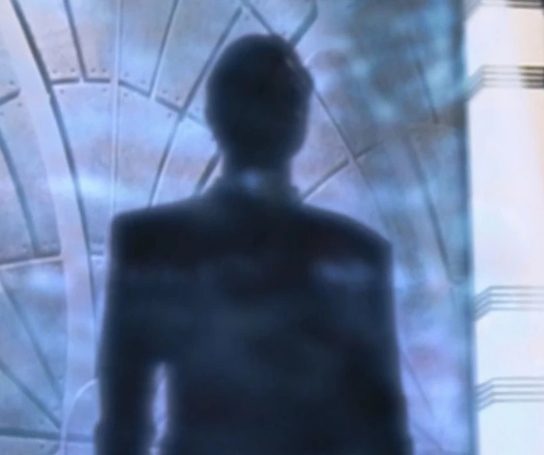 It is I, Future Guy, the shadowy figure manipulating events from the future in the first few season of Enterprise… er, Star Trek: Enterprise. I’m here to tell you why the Star Trek future is now ruined and the Federation won’t happen. Bwahahaha!

I made a change. You missed it, but now everything’s different.

Did you notice humanity didn’t have any Eugenics Wars? That wasn’t intended. Just a side-effect of the real change I made. If humanity did have them, they might have taught us a bit about the futility of the concepts of racial and genetic purity, but as I said, that change wasn’t the key.

Here was the key: You needed society to collapse due to nuclear war, to bring about the Star Trek future.

Ironic, isn’t it? I just needed to save humanity, just once, from nuclear folly from which they would have recovered anyway, to doom the Federation.

In the utopic future of the Federation, we needed to be humbled by being taken to ground, before we opened up to other possibilities. Our systems of greed and fear and power-mongering had to fail us, before we would be ready to change and meet a race like the Vulcans who advanced themselves to the stars with a social system designed entirely around logic.

Nuclear war devastated the rich, industrial nations in the original timeline. Only the countries with the means to arm themselves and their allies fight, and thus are devastated (for the most part), even in the limited nuclear exchange you might recall. Zephram Cochrane, far from the areas of devastation and the radiation in the remote countryside near an undestroyed silo, ironically used a disarmed missile to make his warp ship and draw the attention of the Vulcans to usher in the future of Federation unity. But it was, truly, the nuclear missiles that launched with warheads that ushered in the future of humanity’s unity.

It was the humbling of the devastated enriched nations, their admitted folly at the outcome, and the sympathy and unity of the remaining groups of humanity that made us fit to meet the Vulcans. It is only through this that you see the diverse future of humanity at peace together. Once I made the alteration that removed World War III, climate change became the instrument of this inevitable collapse… and its outcome ensures an entirely different future:

With collapse due to climate change, the poor, equatorial nations of 21st century Earth are hit hardest by the devastation. The industrialized, enriched, colonial nations are not devastated and are instead in a position to deploy their riches and technology to ameliorate the devastation only for their own people, and only completely for the richest among them, dividing them ever further from within. These rich nations close their borders—wall up their borders in fact—and redefine their social contracts and their basic humanity as they allow billions to die around them gradually as they excuse their inaction to themselves, rather than helplessly have billions taken from among their own ranks instantly by a nuclear fire incapable of mercy.

This simple change prevents humanity from ever uniting. There is no clearing the account for billions allowed to die intentionally, billions turned away, billions murdered by negligence, malfeasance, greed, and selfish fear. The scars of climate change collapse and the wars it inspires instead will spark the blood feuds that will follow humanity the rest of its days, whether that be all the way to the end of its long journey to the stars, or, more likely, shortly afterward isolated forever on the planet they will leave incapable of sustaining any life at all.

Mua hah ha hahaha. Also, I am apparently future Captain Archer, for some reason. I guess Berman and Braga forget they had just knocked out that plotline in the Voyager finalé when future Janeway fixed stuff she didn’t like about her own past. I have no idea why I did this sabotage. MUAHAHAHAHAHAHAAAAAAAA!